by Nick Gromicko, CMI®
Adobe is a natural building material made from clay and sand mixed with water and an organic binder, such as sticks, straw or dung. Adobe structures are more common in inhospitable climates and where lumber is scarce. They're commonly built in low-income communities that lack the resources to construct more complex or conventional designs whose components are more costly. InterNACHI inspectors should be prepared to find adobe buildings in all types of communities -- even wealthy ones -- as green building advocates and experimental builders have become more attracted to adobe construction in recent years.
The History of Adobe

Due to the abundance of its constituents and ease by which it is produced and shaped, adobe construction is truly ancient and universal. Even the word “adobe” has existed for around 4,000 years, with little change in its pronunciation or meaning; it can be traced from the Middle Egyptian word for “mud brick” and was borrowed by Late Egyptian, Demotic, Coptic, Arabic, Old Spanish and, finally, English. Entire cities have been made from the material and many adobe buildings have seen continuous use for thousands of years. Even within the United States, many of the oldest buildings, indigenous and European, were made from adobe. Two such examples are the San Miguel Mission of Santa Fe, New Mexico, thought to be the oldest church in the country, and Pueblo towns and villages that have withstood the winds of the American West since 750 AD. Today, the use of adobe is still widespread across the American Southwest, North Africa, West Africa, western Asia, South America and southern Europe.

Perhaps not surprisingly, adobe is an ideal building material for the climates in which it is most commonly found, such as deserts and other regions typified by hot days and cool nights. The material’s great thermal mass cannot transfer heat without a relatively long input of sun exposure, keeping the interior cool during the daytime when the sun burns intensely. By the time the sun sets, the thick adobe walls will have absorbed the sun’s heat, which is then slowly released into the living space when the outside temperature is at its lowest. By the time the structure has exhausted its heat reserves, the sun will rise again, starting the cycle anew.

Adobe provides excellent soundproofing and fire-resistance, which is helpful when a fire must be kept lit during cold nights. It is also easy to produce; according to Sustainable Sources, a green building journal, adobe requires less than 1/150th of the energy required to manufacture a similar amount of Portland cement, and less than five times the energy required to produce ordinary brick.

Adobe walls that are not stabilized require exterior coatings to protect against moisture intrusion. Even in stabilized adobe, protective coatings can retard surface deterioration caused by sand, wind and insects.
While inspecting adobe homes, InterNACHI inspectors may encounter the following types of coatings:

Adobe structures are extremely vulnerable to the effects of moisture, which are mainly in the forms of rainfall and the local water table. Adobe will lose its structural strength as it becomes saturated, turning into putty and eventually flowing and dripping as a liquid. Rainwater splashes can cause coving, which is the hollowing-out of the wall just above grade level.  The dr 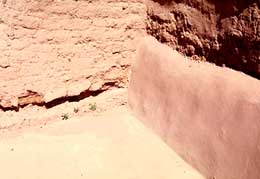 ying process after rainfall can create furrows, cracks, deep fissures and pitting. Weakened walls will bulge, deform and eventually collapse under the roof’s weight. For these reasons, the survival of adobe structures depends on keeping them free from excessive moisture.
The destructive effects of moisture on adobe buildings may be substantially halted by the following remedies:
Adobe Buildings and Earthquake Dangers
Adobe is a heavy yet relatively weak building material, which makes adobe structures particularly vulnerable to earthquakes. The typical mode of collapse is out-of-plane failure of the walls, resulting in the loss of support for the roof.
The scope of this danger can be seen in the devastation caused by the 2003 earthquake in Bam, Iran, where a 6.6 temblor leveled thousands of adobe homes. Along with them fell the 2,500-year-old Bam Citadel, which, at 180,000 square meters, was then the largest adobe structure in the world. 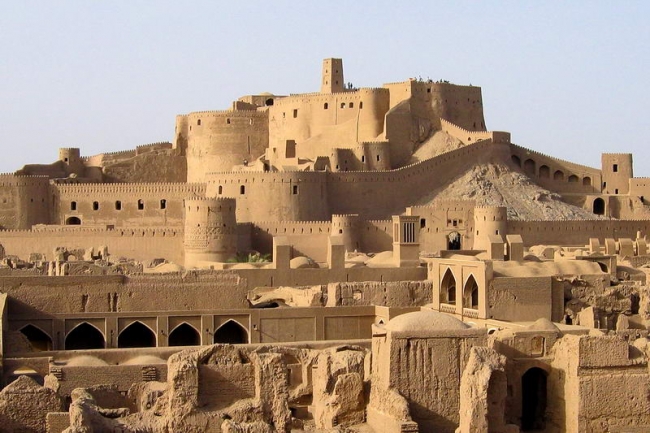 In seismically active Peru, one can further see how not to design earthquake-resistant adobe homes. Traditional construction techniques used there do not call for binding the four walls together, making them vulnerable to even modest seismic shifts in a country that has experienced more than 450 major earthquakes in the last century alone. One Architecture Week reporter commented, “You can see gaps at the corners and between the walls and the roof. That means that when there's an earthquake, the walls just flop outward like cards.  And the roofs, which can weigh up to 11 tons, come crashing down, crushing people to death."
Experimental building techniques in Peru have revealed that strips of electro-welded wire mesh may be used to "sew" the house together along the inside and outside seams of the walls, which are then covered with concrete. 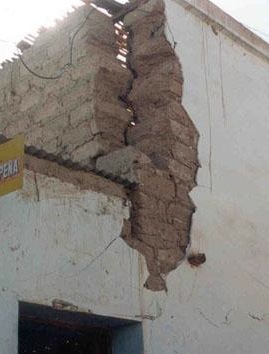 Local materials, such as bamboo and sugar cane, have also been used successfully to strengthen houses against earthquakes. These measures do not make the structure indestructible but, rather, allow the occupants extra time to escape before the ceiling comes crashing down.
Building codes related to the structural reinforcement of adobe are more stringent in seismically active regions, and inspectors and adobe homeowners should learn about the earthquake dangers for their region. An engineering analysis should be performed to determine whether and what type of reinforcement may be necessary.  According to the IBC, steel reinforcement, if used in adobe, "should be embedded in a cement-based mortar and grout unless there is a positive interlacing of reinforcement around the earthen material." Misguided attempts to secure adobe walls often cause more harm than good, as steel reinforcement inserted vertically into adobe bricks can cause cracking because it prevents the new adobe from naturally shrinking. Steel will also not bond with adobe as easily as it will with fired brick or concrete.

Inspectors may notice that adobe walls are pitted, bulging or cracked, or the roof may be sagging, but the cause of these problems may not be obvious. Yet, historic and modern adobe structures share common deterioration problems, so it pays to understand the basic vulnerabilities inherent in the material.
Consider the following sources of adobe deterioration:
In summary, adobe is an ancient and beautiful building material, and there are ways to prevent it from returning to the earth on which it stands.  InterNACHI inspectors, as well as green homeowners, can help avert costly mistakes and potential disasters by learning some fundamentals about its characteristics.
Some of the Information and images contained in this article were sourced from the Technical Preservation Services of the National Park Service, ArchitectureWeek, and the International Code Council.