The purpose of the series “Mastering Roof Inspections” is to teach home inspectors, as well as insurance and roofing professionals, how to recognize proper and improper conditions while inspecting steep-slope, residential roofs. This series covers roof framing, roofing materials, the attic, and the conditions that affect the roofing materials and components, including wind and hail.
ASPHALT SHINGLE LIFESPAN, Part 5 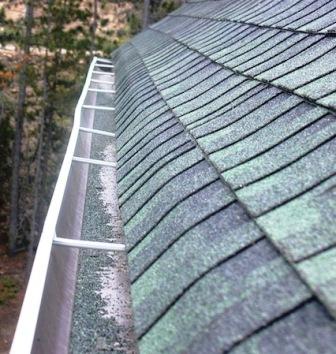 Another result of weathering is granule loss. Granules may be lost for a number of reasons. In determining the cause, it will help to look at the roof from both near and far. Look at it from the ground to check for overall patterns of loss. Examine its surface closely to see details.

When shingles are manufactured, in addition to granules embedded in the asphalt, some granules interlock with embedded granules but are not embedded themselves. 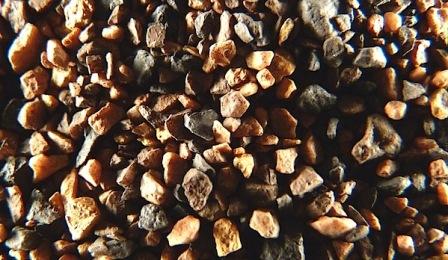 You can see here that not all granules are embedded in the asphalt.

Many of these granules come loose during packaging, shipping and installation, but many are still attached after installation is complete.

These will likely be removed by runoff during storms and deposited into the gutters. It’s common to see an accumulation of granules in the gutters of fairly new roofs. 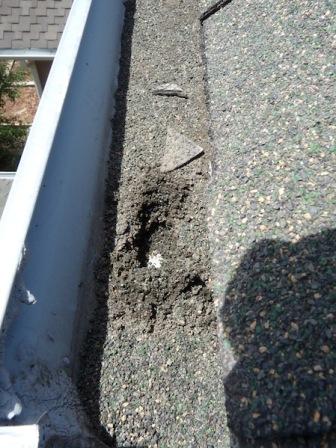 The sediment in this gutter is made up of granules mixed with dirt. If you see granules this deep in the gutters, look carefully at the shingles to see if they’re losing granules prematurely.

Long-term, uniform granule loss is not considered functional damage by insurance companies.  It’s considered part of the natural aging process, unless the shingles appear to be failing prematurely. The rate at which shingles lose granules depends on the quality of the shingles and the climate zone of the home on which they’re installed.

Granule loss which is uniform across the roof is usually a result of normal weathering. Over time, the bond between the granules and asphalt deteriorates, and granules will be loosened and carried away by runoff.

Premature failure of the bond between the granules and asphalt can be caused by poor-quality asphalt. It can also be caused by other conditions. 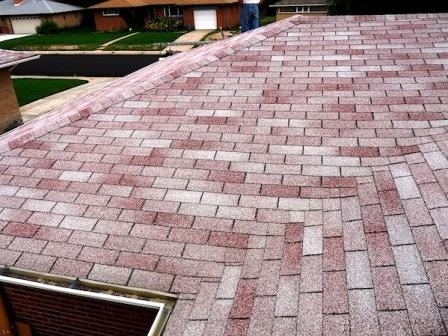 This roof is about 20 years old, and these are 20-year shingles. 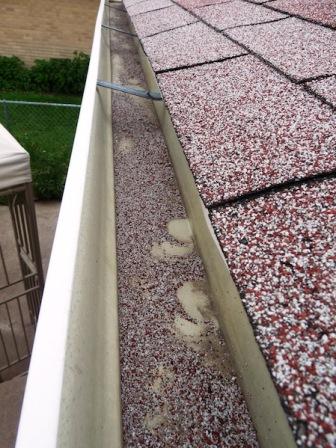 The gutters have an accumulation of granules. 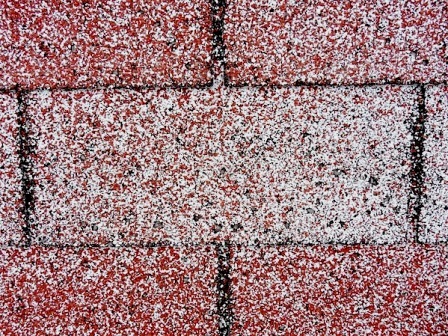 The blistering is probably old, judging from the grey color of the exposed asphalt. Blistering contributed to granule loss, but the loss is primarily due to aging and weathering.

Granule loss limited to slopes facing a particular direction may be caused by increased exposure to the sun or to storms. South- and west-facing slopes are more likely to take a beating. 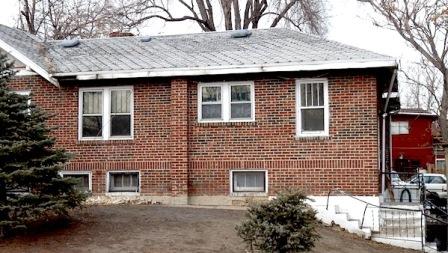 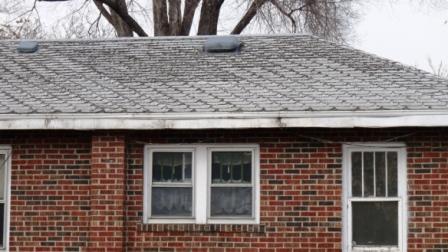 Over time, fairly small differences in shingle thickness or in the composition of the asphalt mix can affect the rate at which shingles deteriorate. 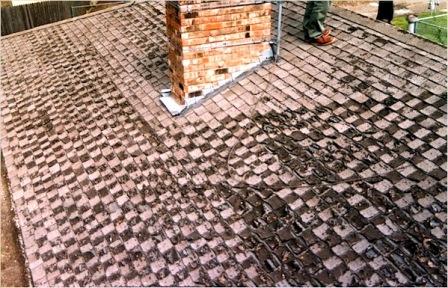 The distinguishing characteristic indicating batch problems in strip shingles is the pattern of deterioration. It follows the offset pattern of installation. 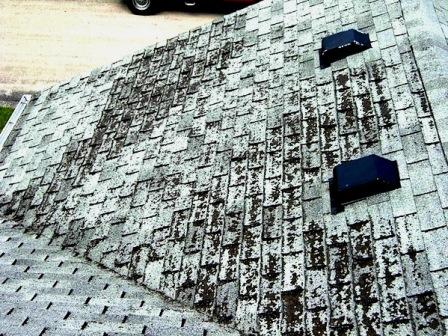 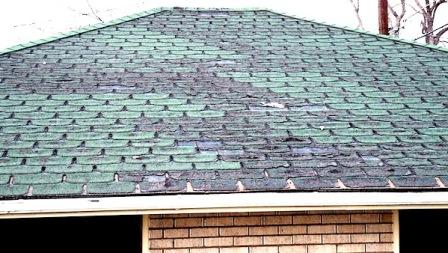 Batch problems with T-lock shingles may look a little different. 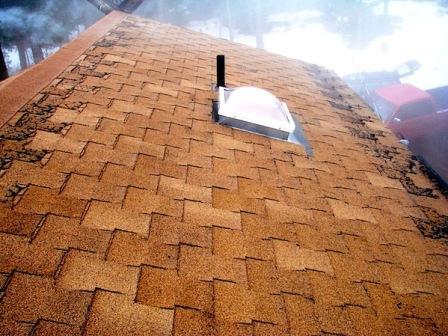 On this roof, less durable shingles from a separate batch were installed along the roof eave and also at the roof peak. The installers may have been a few bundles short and bought extra bundles that were from a different lot.

“Flaking” is a term often used to describe localized delamination. 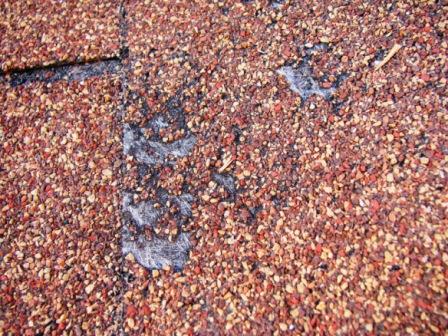 It can be caused by sections of impurities in the asphalt… 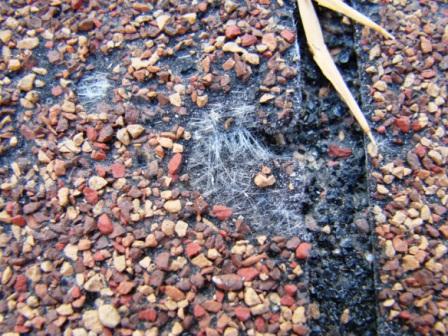 …or by anomalies in the manufacturing process that create areas of weakness that fail before the rest of the shingle. 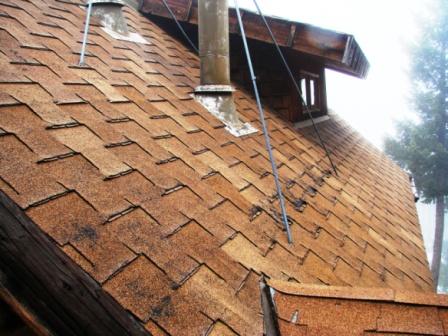 Granule loss in a natural path of travel on the roof is usually caused by scuffing from foot traffic. Look for damage to the shingle butts. At high points, they may be the part of the shingles showing the most wear. 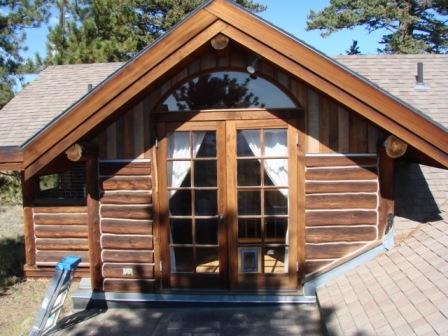 These bedroom doors open onto a flat roof.  The pitched roof to the right is where the children of the family like to play. 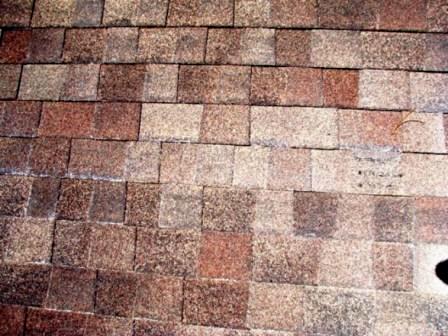 As you can see from the heavy scuffing, this activity took a toll on the shingles.