Ball-peen hammers are the hammers of choice for those wanting to mimic hail damage, their advantages being that their heads are spherical, and they're available in the same diameter sizes as common hail.

Hailstone strikes from a single storm often vary quite a bit in appearance.

A steel hammer with a 1-inch-diameter head swung by a person intending to create damage usually carries more impact-energy than a hailstone of similar diameter. This means that an indentation made by a hammer is often deeper than one made by a hailstone.

Characteristics of Damage by Ball-Peen Hammers

Although steel often crushes granules, granule damage varies with the nature of the substrate and the angle of the blow. Just because you don’t see crushed granules doesn’t mean it’s not hammer damage. 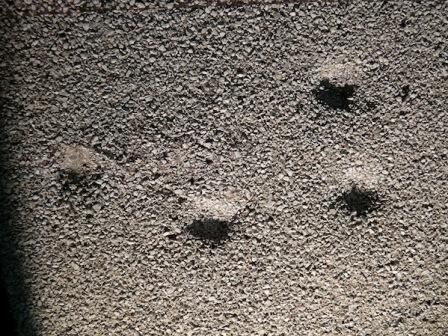 The photo above shows the uniformity common to ball-peen hammer damage. There’s always the chance that someone will use hammers having different size diameters of balls, but the damage will still be fairly uniform.
Claw Hammers

People have also been known to use claw hammers to try to replicate hail damage to shingles. The damage is much more convincing when the round end of the hammer head is used, as opposed to the claw end, but the people who use these haven’t yet discovered ball-peen hammers.

A blow with a claw hammer leaves a "frowny-face" mark where it fractures the shingle.  Again, granules may or may not be crushed, depending on the nature of the substrate. Softer substrates may cushion the blow enough to prevent crushing. 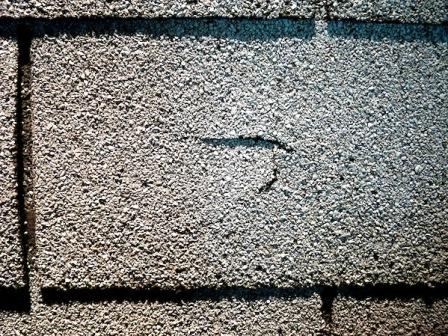 The person swinging the hammer almost always over-rotates the hammer to avoid scraping their knuckles against the shingles. This means that the round, flat face of the hammer head doesn’t hit the shingle squarely, but hits with the top edge. 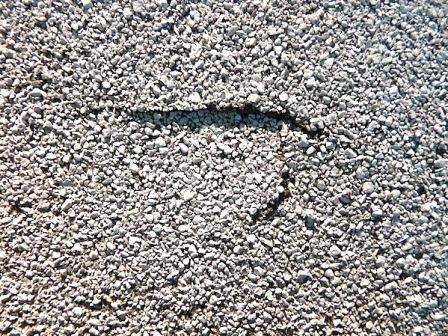 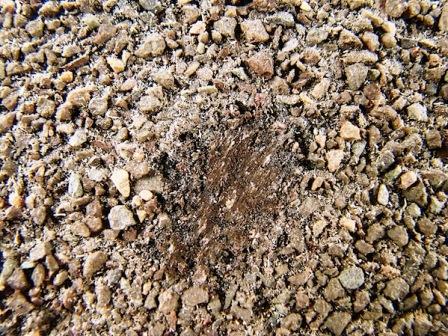 Coins are sometimes used to scrape away granules in an attempt to mimic hail damage. If you look closely, coin edges usually leave visible grooves in the asphalt layer and will remove material, rather than indent it. It actually looks more like a blister than a hailstrike, since hail will embed granules, while a blister will usually shed them. 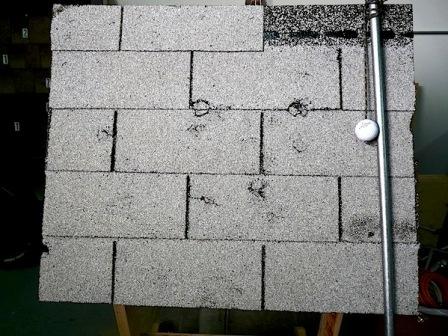 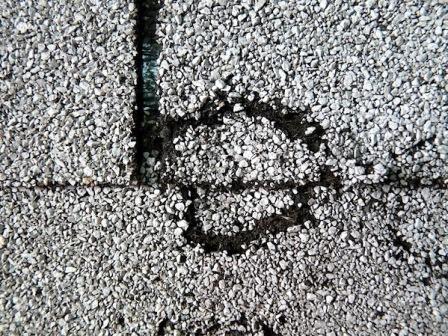 In order to give you an idea of what damage looks like when someone uses a golf ball, we’ve used this golf-ball "whacker" device to damage these shingles. Examined closely, this damage appears similar to a hailstrike. The best evidence that this type of damage is not from hail would be to observe the uniformity and overall pattern of damage across the entire roof.

You’ll encounter other types of damage to asphalt shingles that are not hail damage but may not be intentional damage, either. Although you won’t always be able to identify the source, you can often tell enough from the damage's appearance and location to rule out hail or wind. Here are some examples. 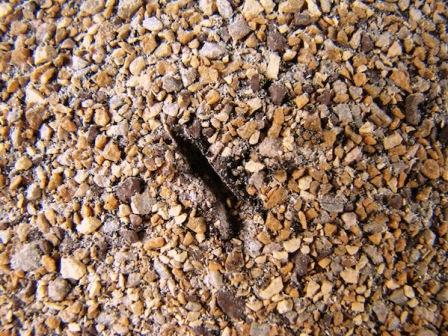 Above is an example of screwdriver damage. 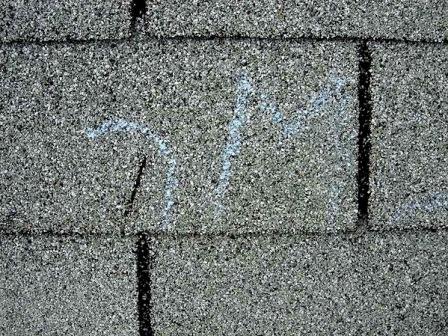 These photos both show mechanical damage. Workmen on a roof often use a variety of tools and equipment. Hand tools, especially when they’re dropped onto a hot roof, can gouge shingles, as will ladders. Workmen may install equipment that can cause damage if it topples over or is moved accidentally. Common places to find this type of damage are around roof-mounted air conditioners, satellite dishes, and solar-heating and photovoltaic panels.

You don’t need to positively identify the source of damage, but you should be able to tell the difference between hail damage and mechanical damage.