by Nick Gromicko, CMI®
Bed bugs are small, flightless, rust-colored parasites that feed on the blood of humans and other warm-blooded animals. Inspectors should learn the telltale signs of these pests and be capable of providing information to their clients. 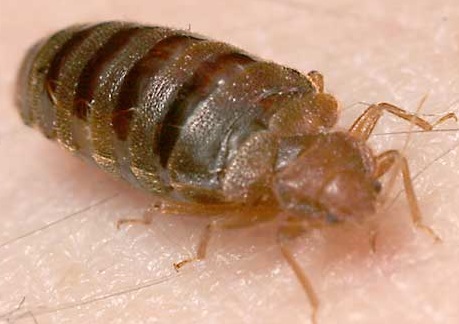 Bed bugs were diminished to an historical footnote after their near-eradication in the 1950s, but they are re-emerging in a big way. At the EPA’s National Bed Bug Summit in 2009, researchers decided that the parasite’s revival is more appropriately termed a pandemic rather than an epidemic, noting its rapid spread across large regions and different continents. For those afflicted by the bug, humiliated and defeated by its persistence, many prefer to refer to the infestation as “house herpes.” The United States has seen a 50-fold increase in bed bug infestations over the last five years, according to the National Pest Management Association. An entomologist told MSNBC, “It’s like the return of the wooly mammoth,” as many of his peers had previously never seen a single bed bug in their careers. The outbreak has affected most parts of North America and Europe, especially in urban areas.

Researchers believe bed bugs have roused from a half-century of hibernation for two reasons:  the termination of the use of the pesticide DDT; and a rise in international travel. DDT, a powerful synthetic pesticide, was used widely in agriculture until a public outcry concerning its safety lead to a US-ban of the chemical in 1972, followed by international bans. Unbeknownst to the environmentalists of the time, these laws would permit future outbreaks to grow unchecked, which is precisely what happened when travel increased from countries where bed bugs were never subjugated, such as India.

Hotbeds of international travel, such as New York City, have hosted the bulk of the carnage. The bugs hitch rides from country to country in suitcases, and creep into hotel rooms where other guests are then exposed and unknowingly spread the parasites to movie theatres, cabs, buses, hospitals, houses, and everywhere in between. In New York City, bed bug reports increased 800% from 2008 to 2009, a year in which the Department of Housing Preservation and Development received 13,152 bug infestation complaints. 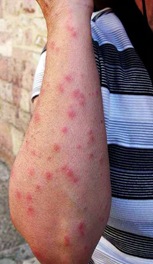 The unpleasantness of a typical rodent or insect extermination is largely the fee charged by the exterminator.  But with bed bugs, this fee is just one piece of a greater nightmare. Because bed bugs are adept at hiding almost anywhere, an alarming quantity of possessions, from curtains to books and picture frames, must be discarded or quarantined. In one posh New York City rental tower, a tenant was forced to part with carpets, bedding, curtains, 20 cashmere sweaters, an Armani suit, a couch, a headboard, a night table, a bedframe, and an exercise bike, according to the New York Daily News. Other victims have had to throw away their books unless they were willing to inspect each one, page by page. Some possessions may be salvaged if they are sealed in special casing long enough for the bed bugs to die, which can take many months. During this time, residents may be forced to move to temporary housing elsewhere.

Fortunately, the health dangers posed by bed bugs seem to be limited to temporary skin irritation and inflammation, akin to mosquito bites. There are no known cases of disease transmission from bed bugs to humans, despite the fact that the parasites seem similar to other parasites that do transmit disease, such as fleas and ticks. Anaphylactic shock, however, may be experienced by a small percentage of the population, and measures should be taken to prevent bacterial infection of bitten areas.

Adult bed bugs are flat, apple-seed sized with rusty-colored, oval bodies. Newly hatched bed bugs are semi-transparent, light tan in color, and the size of a poppy seed. Yet, due to their elusive nature, their presence is usually discovered through peripheral clues rather than by seeing the bugs themselves. Some of these signs include fecal spots, blood smears, crushed bugs, or the itchy bumps that may result from bites. Bugs may be disturbed while feeding and leave a cluster of bumps, or they may bite in a row, marking the path of a blood vessel. The parasites emit a characteristic musty odor, although the smell is sometimes not present in even severe infestations. The bugs also emit a smell that is detectable by dogs, which has lead to the implementation of dogs in bed bug detection. Properly trained dogs can find bed bugs in wall voids, furniture gaps, and other places that humans may overlook and, in doing so, they focus on the area in which exterminators must spray. 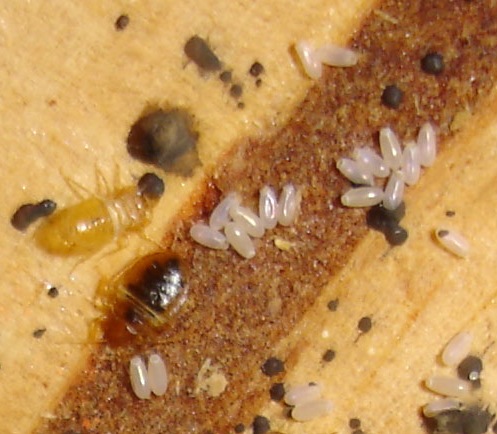 It is best for bed bugs to be treated by pest management professionals (PMPs), not homeowners, as there is risk that an inexperienced person may spread the infestation further throughout the home. For instance, bug bombs will be ineffective and merely spread bed bugs. Even chemical sprays designed to kill bed bugs, if used by inexperienced homeowners, may make the infestation worse. PMPs can inspect for bed bugs in their immature stages of development, including their eggs, while homeowners cannot. In addition, prep work performed by a homeowner may make it difficult for the PMP to assess the extent of the infestation.
The following tactics may be useful, however, for temporary relief or confirmation of the presence of bed bugs:
Homeowners can limit their chances of bed bug exposure by purchasing only new furniture, as stowaway bugs can hide in older or used chairs and mattresses. Hostels, hotels and motels host many travelers and are obvious breeding grounds for bed bugs, and many hostels ban sleeping bags for this reason. Unfortunately, person-to-person contact is difficult to avoid.
In summary, bed bugs are a growing, serious threat. Along with wood-destroying organisms, inspectors may want to enhance their knowledge by learning to recognize and become familiar with the problems posed by bed bugs because of their potential to infest homes and damage property.