by Nick Gromicko, CMI® and Ben Gromicko
Collar ties and rafter ties are both horizontal roof-framing members, each with different purposes and requirements. Home inspectors should be familiar with these structural members and the differences between them, as they are not the same.
Please note that, according to the International Standards of Practice for Performing a General Home Inspection, the inspector is required to inspect the visible and accessible structural components and the general structure of the roof system. 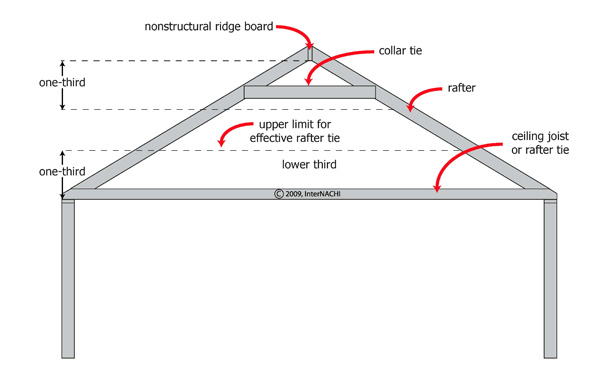 In physics, tension is the pulling force exerted by a solid object on another object. Tension members are solid objects (or structural members) that are subjected to axial tensile forces, or tension. Collar ties and rafter ties are examples of tension members.
Tension Tie
A tension tie is a structural member that is subject to net tension.
Collar Ties
"Collar ties" are defined in the International Residential Code (IRC) in Section R802.4.
A collar tie is a tension tie in the upper third of opposing gable rafters that is intended to resist rafter separation from the ridge beam during periods of unbalanced loads, such as that caused by wind uplift, or unbalanced roof loads from snow. Ridge straps are permitted to replace collar ties.

If collar ties or ridge straps are installed to connect opposing rafters, they must be located in the upper third of the attic space. They must be at least 1 inch by 4 inches (25 mm by 102 mm). They must be spaced no more than 4 feet (1219 mm) apart. They must be properly fastened.

In high-wind areas, uplift can tear a roof off of a house if it's not properly attached.

Collar ties and ridge straps should be installed on roof with a minimum slope of 3:12, a maximum wind speed of 100 miles per hour, and a maximum roof span of 36 feet.

Other facts about collar ties:

A rafter tie is a tension tie in the lower third of opposing gable rafters that is intended to resist the outward thrust of the rafter under a load. In many situations, you'll find that ceiling joists installed parallel to the rafters are intended to function as rafter ties. The roof framing mock-up below shows a standard rafter tie. Rafter ties are installed between opposing rafters, and they should be installed as close as possible to the top plate.
Rafter ties help resist the outward thrust that rafters exert on the exterior walls. They help keep walls from spreading due to the weight of the roof. When the walls spread, the ridge board might sag. A sagging ridge is one indication that the roof structure may lack adequate rafter ties. A rafter tie forms the bottom chord of a simple triangular roof truss.
When ceiling joists run perpendicular to the rafters, inspectors may find rafter ties installed above ceiling joists as framing members every 4 feet running above the ceiling joists connecting opposing rafters.
Rafter ties should be at least 2 x 4 inches (51 mm × 102 mm).

Other facts about rafter ties:

Tension Forces
Rafter and collar ties are subject to enormous tension forces. These forces make securing the ties to the rafter boards a critical issue. The force in each tie increases with the inverse of the slope. So, the greater the roof slope, the weaker the outward thrust.
Outward Thrust
The load on a structure can be calculated by combining the dead load or weight of the structure itself, the live load that varies for different structures, the snow load, and the wind load.
In a simple gable roof, the rafter boards carry the live and dead loads that push both downward and outward against the top of the load-bearing walls. This horizontal outward thrust can be considerable. To resist this horizontal outward thrust, the International Residential Code calls for each pair of rafters to be securely connected to each other by a continuous ceiling joist, and for a structural ridge beam to be installed for roofs with a slope of less than 3:12 (see illustration below). Ceiling Joists
Where ceiling joists are not connected to the rafters at the top wall plate, joists connected higher in the attic shall be installed as rafter ties, or a continuous tie should be provided. Where ceiling joists are not parallel to rafters, rafter ties shall be installed. Where ceiling joists or rafter ties are not provided, the ridge formed by these rafters must be supported by a wall or girder.
The ends of ceiling joists should be lapped a minimum of 3 inches, or butted over bearing partitions or beams and toenailed to the bearing member. Where ceiling joists are used to provide resistance to rafter thrust, lapped joists shall be nailed together in accordance with Table R802.5.1(9) in the IRC. For example, if a house has a 4:12 slope, the rafters are on 16-inch centers, the snow load is 30 per square foot (psf), and the roof span is 28 feet, you need eight 16d common nails (or 40d box nails) at each rafter-heel joint connection. That's a lot of nails a home inspector can look for.
Cathedral Ceilings
Cathedral ceilings are popular in many homes, but they have special issues with the downward load on the rafters that push outward on the exterior walls. Open collar ties and ridge beams address many of these issues. The higher the tie is located, the less leverage is available to counteract the outward-thrust forces. Many cathedral ceilings often display indications of movement, such as cracked drywall. The most effective way to reduce outward thrust is to use a structural ridge beam.
Bottom Chord of a Truss
In a conventional roof truss, the bottom chord acts as a tension tie between the exterior walls. Alterations to installed trusses are not permitted. Cutting any truss, particularly at the bottom chord, destroys the structural integrity of the truss. If the inspector finds that the chord of a truss has been cut, he/she should recommend that a structural engineer be consulted.
The bottom chord of a truss should not be attached to an interior wall partition. Attaching the bottom chord of a truss to an inside wall can cause the web members designed for tension to become compression members. When the bottom chord is nailed to a top plate of an interior wall, a home inspector might observe cracking interior finishes at the corner of the finished wall and ceiling.
Lower One-Third
Older building codes permitted rafter ties to be installed very high above the top wall plate, as much as two-thirds the distance between the top plate and the ridge. The 2012 IRC now limits this to one-third the distance between the plate and the ridge. For example, if an unfinished garage has a roof with a 4:12 slope and the roof span is 24 feet, the rafter ties should be located no more than 16 inches up from the plate, according to modern building standards.
Tension
The roof framing mock-up below shows a standard collar tie. As the load is applied downward, tension in the collar tie is increased. Compression
The illustration below shows a king post truss on posts. As the load is applied downward, compression is increased at the posts. Bending Moment
A bending moment occurs when a force changes from a straight form into a curved or angular one. The illustration below shows a collar tie with rafters on top of conventionally framed walls. As the load is applied downward, the rafters go into a bending moment below the collar tie. This bending moment exerts outward thrust on the walls, making them out of plumb. Summary
In summary, collar ties and rafter ties perform different functions, but both are essential roof-framing members, and it's useful for inspectors to be aware of their differences in order to properly call out defects.