by Nick Gromicko, CMI®
Daylight Saving Time (DST), also known as British Summer Time (BST) in the U.K., is the practice of adjusting clocks an hour ahead of Standard Time so that afternoon 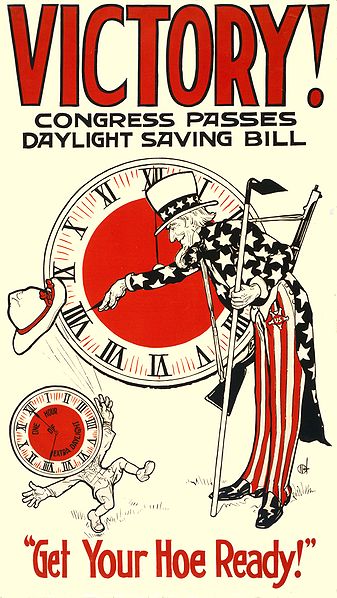 s have more daylight and mornings have less. It is designed to reduce energy consumption in residences and businesses, but its effectiveness is controversial.

While DST in its modern form dates back less than a century, ancient civilizations lacked artificial lighting and routinely adjusted their schedules to account for changes in sunlight. For instance, Roman water clocks measured and displayed hour lengths that differed based on the month. Modern DST was first proposed in 1895 by a New Zealand entomologist who realized the value of evening daylight while collecting insects at dusk. He proposed a two-hour daylight-saving shift, an idea that garnered considerable attention in his country. Independently, a British builder named William Willet proposed daylight saving in 1905 after witnessing during his early morning ride how many blinds had not yet been opened after sunrise. The House of Commons examined his proposal for many years but it never became law in his lifetime. It took a world war to entice legal changes, as Germany adjusted its clocks to conserve coal use in 1916. Britain and its allies followed Germany’s lead, trailed by Russia and the United States by 1918. These measures were met by a flurry of confusion, opposition and acceptance that has persisted to the present day.

DST begins and ends in the spring and fall, when the clock is set forward or backward an hour, respectively. In the United States, these time shifts occur at 2:00 a.m. local time on the second Sunday in March and the first Sunday in November. In the European Union, time is shifted on the last Sundays of March and October, at 1:00 a.m. Universal Time so that the different time zones shift at the same minute. The early hours of a Sunday are chosen so as to minimize interference with weekly schedules. Hawaii and most parts of Arizona do not observe DST, along with parts of Canada, Europe and Australasia. Equatorial and tropical countries generally do not observe DST because daylight hours are similar year-round, eliminating the advantage of moving clocks forward during the summer.

The potential for DST to conserve energy stems from its effect on the need for lighting, which accounts for about 20% to 50% of the total energy consumed in houses and offices in the United States. The theory is simple:  Overall, electricity consumption will be reduced if the energy saved at night by extending daylight hours outweighs the additional energy consumed during the morning hours when early risers are robbed of the sunlight on which they would normally rely. People thus gain illumination from the sun instead of artificial lighting in the late afternoon, and they are more likely to pursue outdoor activities that require sunlight rather than staying home, where they use computers, televisions and electric lights.

The oil crisis of the 1970s was reason for the first comprehensive study on the effect of DST on energy expenditure; the U.S. Department of Transportation found that DST trimmed national electricity usage by roughly 1% compared with Standard Time. Energy-use patterns have changed significantly since this study was performed, however, and the effects of DST on home and business energy usage have become far more complex and difficult to quantify. DST increases the need for air conditioning, for instance, as more hours of sunlight during the hours that people are home from work and school create additional cooling requirements. Moreover, the effects of DST on energy consumption are greatly affected by geography, climate and economics. A 2008 study determined that overall residential electricity consumption in Indiana increased as a result of DST by 1% to 4%, equating to a rise of $8.6 million in energy costs and a proportional release of emissions. Research also showed that DST caused an increase in energy expenditure in Western Australia for the years 2006 and 2007. The largest such study came in 2008, the year after DST was prolonged by four weeks; nationally, residences and businesses used 0.5% less energy overall, but large regional variances made it impossible to generalize its effectiveness as an energy-conservation tactic. States that saw an increase in energy consumption are located in hotter climatic regions where air conditioning is more likely to be used. Experts also pointed out that more evening hours of daylight encourage people to run errands and visit friends, thus consuming more gasoline.

Homeowners cannot choose whether to observe DST, but they can reduce their energy consumption by switching to efficient lighting, upgrading outdated HVAC equipment, and investing in solar technology. They should consult with their InterNACHI inspector during their next scheduled home inspection if they have specific concerns.

In summary, Daylight Saving Time is a controversial practice of time-shifting that has the potential to decrease energy expenditure in homes and businesses.