What is an evaporative cooler?

An evaporative cooler, also known as a swamp cooler, wet-air cooler, and desert cooler, is a device designed to cool air via the evaporation of water.  This is a natural and energy-efficient way to achieve a comfortable indoor temperature.  An evaporative cooler cools indoor air by drawing outdoor air into the unit and passing it over pads that have been saturated with water from a reservoir in the unit.  The water evaporates into the air as it passes over the pads, and the result is a 15° to 40° drop in temperature.  The cooled air is then directed through interior areas where a lowered temperature is desired, forcing warm air outside through open windows.  Because of this, evaporative coolers steadily circulate fresh air through the interior, unlike air conditioners, which circulate the same air over and over again.  They also cost far less than air conditioners and use around a quarter of the energy, making them a very efficient alternative.

How does evaporation work to lower air temperature?

This process can be observed naturally near a waterfall, lake, river or ocean. 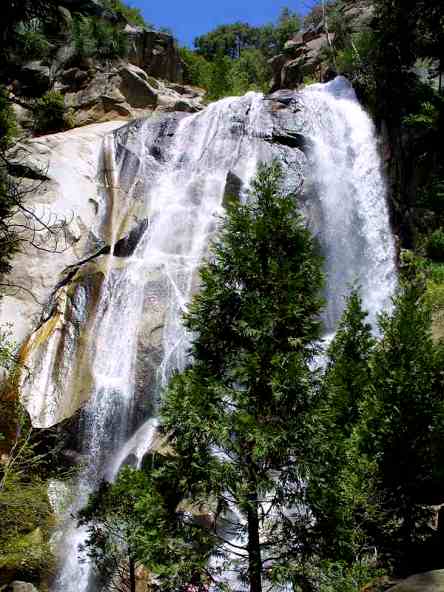 How an Evaporative Cooler Works

An evaporative cooler is basically a large fan with pads, moistened by water, which are located in front of the fan.  The fan pulls the hot, outside air inside, and the air is cooled after passing over the wet pads.  The pads are usually made from wood, wool or fiber, though some plastics and melamine paper are now also used to make cooler-pads.  However, wood absorbs some of the water, which allows it to cool the passing air to a lower temperature than some synthetic materials.  The thickness of the pad also plays a part in the cooling efficiency because a larger pad allows longer air contact, so a 10-inch pad is more efficient than a 4-inch pad.  The pads need to be replaced every season or two, but they are fairly inexpensive.

Small water distribution lines wet the top of the pads, which become soaked.  Once the water trickles through them, collecting at the bottom in a sump, a small re-circulating pump sends it back to the top of the pads to soak them again.  When enough water is lost through the evaporation process, a float valve adds water to the sump so the pads can continue to be soaked.  Under normal conditions, a cooler may use between 3 and 15 gallons of water per day.

Because evaporative cooling takes air from outdoors, cools it, and circulates it indoors, there must be a way for the warm air inside to escape when it is displaced by the incoming cool air.  By leaving doors and windows open strategically, it is possible to direct the path of incoming cool air to areas where it is needed.  Even smaller units can be effective for larger areas when used in this way.  Many types of cooling units are currently manufactured, including small units for installation in windows, as well as large units meant to be installed centrally to blow air through ductwork and into individual rooms.

The most important factor to keep in mind when determining whether an evaporative cooler can be utilized effectively in a particular situation is the moisture content of the outside air.  Since the air will not hold additional moisture once it reaches its saturation point, no drop in temperature will occur through evaporation if the air is already saturated.  Because of this, evaporative cooling cannot be used effectively in wet or humid climates.  Meanwhile, in areas where the air is hot but humidity is low, the coolers can be used as a cost-effective and energy-efficient alternative to air conditioners.  Such areas in the U.S. include Colorado, Utah, New Mexico, Arizona, northern Texas, and some parts of California.

Here are some advantages and disadvantages of using evaporative cooling vs. traditional, phase-change air conditioners.

In summary, evaporative coolers can be less expensive and environmentally friendlier alternatives to traditional air conditioners, depending on the climate and other factors.  Inspectors can advise their clients about controlling indoor temperatures and moisture levels, if such units are in use at a residence.