Commercial property inspectors, especially those who inspect food-handling establishments, can assist their clients in understanding the operation of grease traps so that their maintenance is not neglected.  An inoperable or clogged grease trap can cause serious problems not only for the inspected establishment, but also for neighbors and even the entire local community. 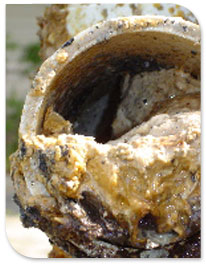 The terms “grease traps” and “grease interceptors” are often used interchangeably, but they are distinctly different technologies. While they both remove grease from water and operate by similar principles, here are some of their differences: 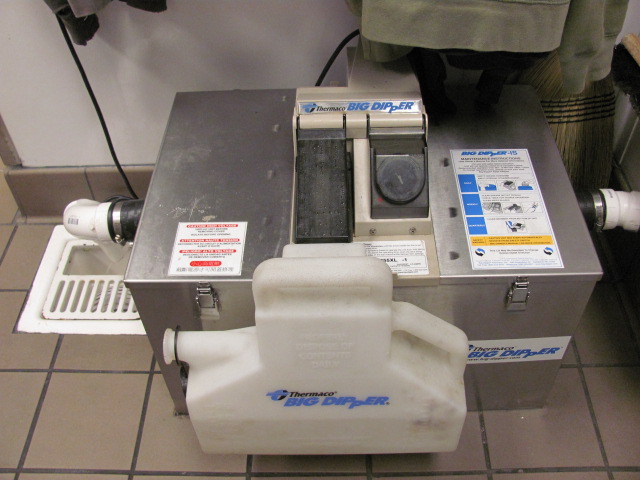 Grease traps and interceptors merely trap grease, so they should not be confused with automatic grease-removal units or grease converters. The former device employs hydrostatic pressure or a skimmer to clean itself, has more moving parts, and relies on motors, heaters and timers. Grease converters trap grease in a tank that contains bacteria and enzymes that digest the grease and convert it into a water-soluble biodegradable product that can be safely discharged into the drainage system.
How Do Grease Traps Work?

Most grease traps are passive, which means that they operate without any moving or mechanical parts. Greasy wastewater entering the trap passes through a vented flow control that regulates the flow of the wastewater. The wastewater passes over a series of baffles that separate the grease and oil from the water by slowing the flow to allow enough detention time for lighter fats, oils and greases to rise. The clean water rests at the bottom, where it may leave the unit through an exit valve, retaining the FOG within the trap until it is cleaned out. 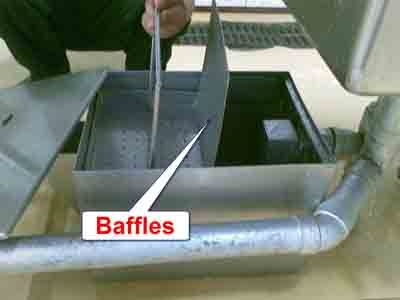 Without these devices, grease will enter sanitary sewer systems to create economic, safety and environmental hazards by clogging and damaging pipes and interfering with water-treatment plant operations. The U.S. Environmental Protection Agency estimates that nearly half of all the 400,000 sewer blockages that occur annually are caused by grease, and many of these contribute to the 40,000 annual sewer overflows. Even accumulated FOG that does not lead to an overflow or blockage may increase public maintenance and costs. Homeowners, business owners and municipalities are burdened by cleanup costs that can exceed $100,000 per incident. People may be responsible for overflows that are not their fault, as was the case in 2007 when the city of Fort Worth, Texas, declared immunity to severe damage caused to three residences when effluent from the public sewer system flooded their homes.

Restaurants are the most common source of FOG that causes backups, and they're particularly vulnerable to the resulting damage, often in the form of lost business during temporary closure, spoiled food, and injured reputation. The use of adequately sized and regularly inspected grease traps is thus mandated by local jurisdictions in restaurants, along with hotels, food-processing establishments, supermarkets, factories, and other places that routinely generate significant amounts of grease that would otherwise wind up in public sewers.

InterNACHI commercial inspectors and business operators can use the following checklist for inspecting grease traps:

It is important to understand that the grease trap’s efficiency diminishes as the trap fills with FOG, and when it is filled to capacity, it will no longer separate any FOG from water. The operator may not realize that the trap is full, however, as it will continue to accept water even after it fills, sending the unfiltered FOG directly into the sewer system. And because grease fills the trap from the top down (combined with variations in grease load), it can be difficult to know when the trap needs to be cleaned. And, unfortunately, cleaning grease traps, especially large units, is an unpleasant undertaking that may require restaurant operations to temporarily cease, so this important maintenance task is often neglected. Sometimes, too, amidst the hustle and bustle of a restaurant environment, the chore of cleaning the grease trap is simply forgotten.

The plumbing industry standard states that grease traps should be cleaned when 25% of the volume is occupied by grease (and 75% by water). Traps may need to be cleaned before hitting this threshold, however, so the operator will need to monitor the trap, particularly grease accumulation on the outlet baffle, to determine an appropriate cleaning schedule for the commercial enterprise. 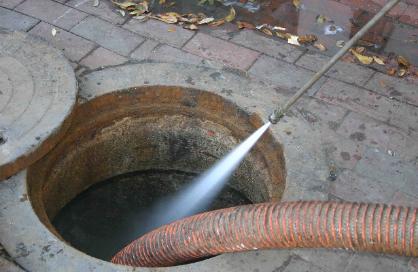 After disassembling the trap, the layer of FOG should be placed into a watertight bag or container and placed in the trash. Unlike “yellow grease” collected from deep-fat fryers that can be used in the production of biodiesel, soap and rubber, FOG is not recyclable and it must be placed in the trash. The interior sides, baffles and lid should then be scraped of FOG and cleaned. Rubber gloves should be worn and soap and antibacterial substances should be avoided during the cleaning process. When the trap is re-assembled, care should be taken to align the parts properly as, once flow is resumed, misaligned parts may allow overflowing and contamination of grease into the restaurant. While cleaning grease interceptors, care should be taken to avoid pinch points created by heavy manhole covers and to avoid damaging the rubber lining that prevents odors from escaping above ground. Any large items found at the bottom of the interceptor tank should be removed.  One company reported having discovered a tricycle in their tank.

To reduce the need for cleaning the grease trap, unfinished food, fats, cooking oil and grease remaining in pots and pans should be dry-wiped or scraped out and into the trash prior to wet-washing. This measure can substantially reduce FOG discharged into the grease trap and prevent the release of foul sulfur gases into the commercial establishment.

In summary, grease traps and grease interceptors are plumbing devices required in food service facilities that prevent fats, oils and grease from entering the public sewer system. InterNACHI inspectors and business operators should learn how these devices work and how they are cleaned, maintained and inspected.