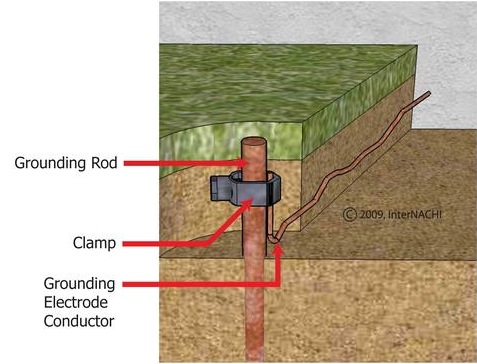 and the earth. Lightning and static electricity are the most common sources of dangerous or damaging charges that can be dissipated through a grounding system. Grounding electrodes are connected to the building’s electrical system through grounding electrode conductors, also known as ground wires. A number of different metal alloys can function as grounding electrodes, the most common of which are the focus of this article.
Requirements for electrodes and ground wires:
Common Types of Grounding Electrodes Grounding Rods
The most common form of grounding electrode is a metal rod that is hammered into the ground so that its entire length is submerged. InterNACHI recommends that the rod be inserted vertically and in one piece, but this is not always possible in rocky areas. If the rod is hammered into sub-surface rocks it might become scratched and lose its cladding. Rust can accumulate on exposed iron or steel and degrade the conductive capacity of the rod. Unfortunately, this rust will rarely be visible to an inspector.
Electricians have been known to cut the rod when they have difficulty inserting its entire length beneath the ground. This practice violates code and can be a safety hazard. Inspectors should look for the following signs that indicate that a grounding rod has been shortened:

Inspectors should bear in mind that utility companies sometimes allow ground rods to be shortened. A qualified electrician can test whether a shortened rod is an adequate grounding electrode.

If accessible, inspectors should check the condition of the clamp that connects the grounding rod to the ground wire. Clamps should be made of bronze or copper and be tightly fastened. Requirements for rod length, thickness, and protective coating are addressed in the 2006 International Residential Code (IRC) as follows:

Rod and pipe electrodes not less than 8 feet (2438 mm) in length and consisting of the following materials shall be considered as a grounding electrode:
Notes
Concrete-Encased Electrodes (Ufer Grounds)
This electrical grounding technique was invented during World War II in Arizona, and is commonly called “Ufer” after its creator, Herbert G. Ufer. The United States Army was concerned that lightning or static electricity could cause the accidental detonation of explosives that were stored in igloo-shaped vaults. The desert climate restricted the usefulness of grounding rods, which would have to be driven hundreds of feet into the dry earth in order to be effective. Ufer advised the military to connect ground wires into the concrete-encased steel reinforcement bars (re-bar) of the bomb vaults in order to dissipate electricity effectively into the ground. Testing confirmed his theory that the relatively high conductivity of concrete would allow electric current to dissipate into a large surface area of earth. The Ufer method is more common in newer residential construction and requires a metal frame. It might be difficult for an inspector to detect this type of electrode. The 2006 IRC details Ufer grounds as follows:
An electrode encased by at least 2 inches (51 mm) of concrete, located within and near the bottom of a concrete foundation or footing that is in direct contact with the earth, consisting of at least 20 feet (6096 mm) of one or more bare or zinc-galvanized or three electrically conductive coated steel reinforcing bars or rods of not less than 1/2 inch (12.77 mm) diameter or consisting of at least 20 (6096 mm) feet of bare copper conductor not smaller than 4 AWG shall be considered as a grounding electrode. Reinforcing bars shall be permitted to be bonded together by the usual tie wires or other effective means.
Metal Underground Water Pipes 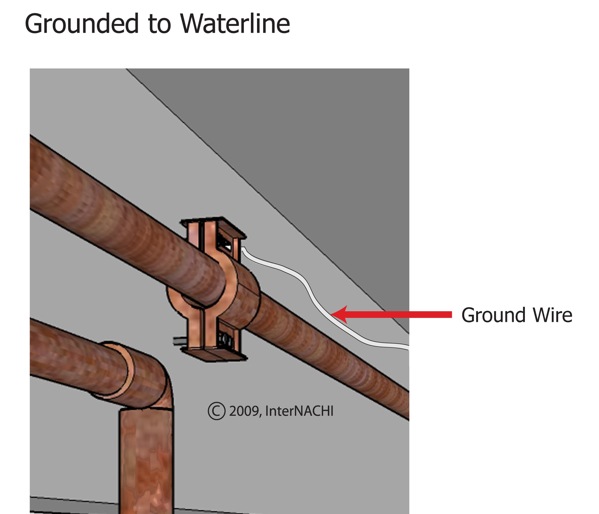 A building’s plumbing system can be connected to the ground wire and function as a grounding electrode. For some time, this was the only mandatory grounding electrode type and it was generally preferred over other methods. As of 1987, however, this method became the only one that must be supplemented with another type of electrode. This transition is due to the increased popularity of non-conductive dielectric unions and plastic pipes. When plumbing has been replaced with plastic pipes a notice is required to be placed at the electrical service panel that states that there is a non-metallic water service. Inspectors will not be able to tell if outdoor water pipes that run to street water mains have been replaced with plastic components.
Inspectors should check for the following:
The 2006 IRC states the following about water pipe electrodes:

Less Common Grounding Electrodes
The previously mentioned grounding electrodes constitute the vast majority of grounding systems that inspectors will encounter. The two electrodes described below are far less common, although they are recognized by the IRC. Inspectors might not be able to verify their presence. The 2006 IRC explains them as follows:
Plate Electrodes
A plate electrode that exposes no less than 2 square feet (0.186 m2) of surface to exterior soil shall be considered as a grounding electrode. Electrodes of iron or steel plates shall be at least 1⁄4 inch (6.4mm) in thickness. Electrodes of nonferrous metal shall be at least 0.06 inch (1.5mm) in thickness. Plate electrodes shall be installed not less than 30 inches (762 mm) below the surface of the earth.
Ground Ring Electrodes
A ground ring encircling the building or structure, in direct contact with the earth at a depth below the earth’s surface of not less than 2.5 feet, consisting of at least 20 feet of bare copper conductor not smaller than No. 2 shall be considered as a grounding electrode.
In summary, a variety of home service grounding electrodes can be used to safely route unexpected electrical charges away from places that they can cause harm. Inspectors should be aware of how they differ from one another and be prepared to spot defects.