The purpose of the series “Mastering Roof Inspections” is to teach home inspectors, as well as insurance and roofing professionals, how to recognize proper and improper conditions while inspecting steep-slope, residential roofs. This series covers roof framing, roofing materials, the attic, and the conditions that affect the roofing materials and components, including wind and hail.
Shape

Hailstone shape is important because it affects the manner in which the impact energy from a falling hailstone is transferred to the material it strikes. 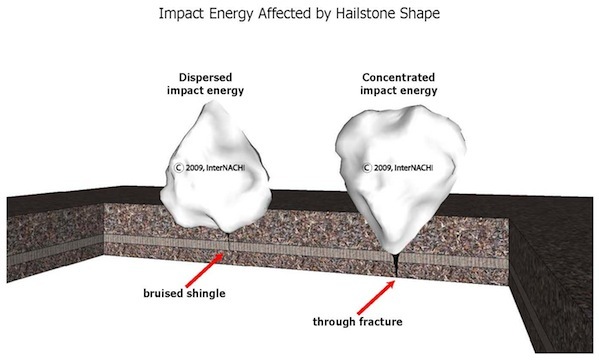 About 75% of hailstones are spherical, conical or ellipsoidal in shape -- ellipsoidal being like a slightly squashed sphere.  Spherical is by far the most common shape, especially with small and medium-sized hail.

Occasionally, hailstones will form unusual geometrical shapes. Individual damage marks from stones like these will not fit the typical profile, although the overall pattern of damage across the roof and elsewhere around the home site will not be affected by hailstone shape.

“Directionality” is a term used to describe the fact that hail usually blows in from a certain direction. Since hail is associated with storms, the roof slope and elevation facing the direction of the oncoming hailstorm will suffer the most severe damage. Although supercells in the West generally move from the Southwest toward the Northeast, this can vary.

The concentration of damage should vary according to which direction each home elevation faces. This photo shows a home that had 10 hits in the siding at the back of the home, but no hits at the front or sides. 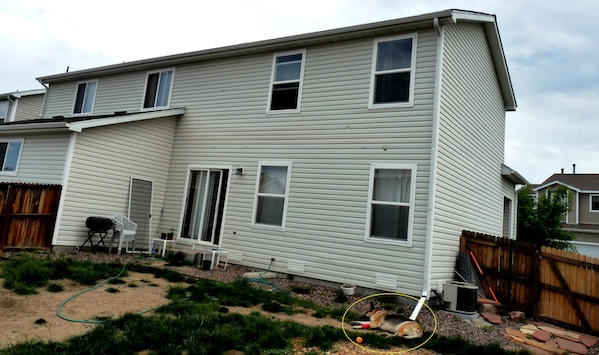 The hail was not orange and did not do in the dog, although it may have clipped him. This area was hit by tennis ball-size hail. No wonder this poor dog is tired.

Occasionally, hail will fall almost straight down, and, in these situations, damage on different slopes may be similar, and collateral damage may be limited. 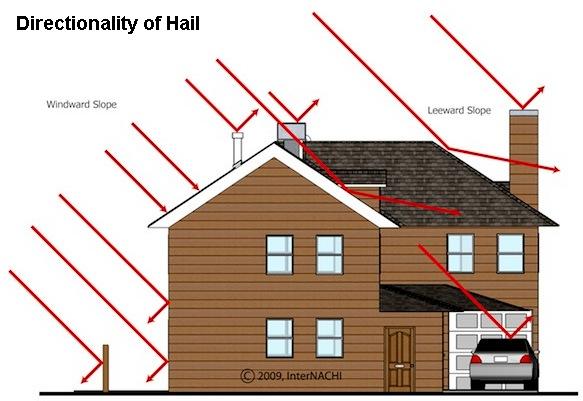 When you perform on-site inspections, you should see evidence of hail which is consistent in its directionality. If hail blew in from the Southwest, you would expect to see the most severe hail damage on surfaces facing that direction.

If you see hail damage of similar severity on both the north and south sides, that’s not consistent with damage from a single hailstorm, but is more likely to be damage from two separate hailstorms. You should compare the damage from each side, and look for signs that indicate damage of different ages. We’ll talk more about how to do that later. 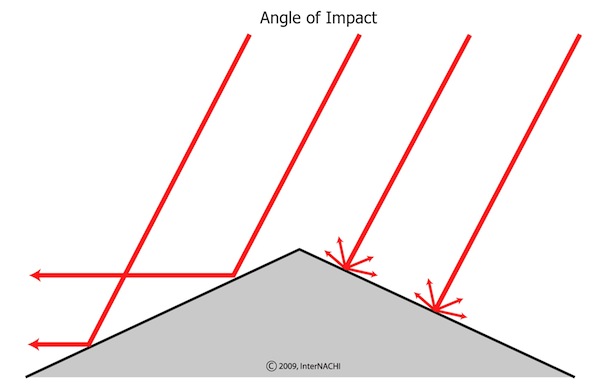 Hail falling in storms with higher wind speeds will impact at a steeper angle than hail falling through calmer air.

The severity of damage from the angle of impact should be consistent with other evidence of directionality that you see on various surfaces around the property.