An Introduction to Foreclosures

A foreclosure is a process by which a homeowner loses their property, usually to a lender or local government, for failure to pay agreed-upon taxes, payments or fees.
Common reasons for foreclosures include: 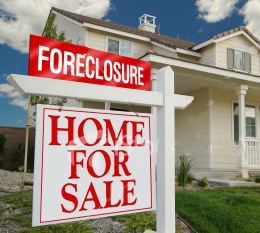 Foreclosures are becoming the norm in property transactions, as 31% of all residential sales in the first quarter of 2010 were homes in some stage of foreclosure, according to a U.S. Foreclosure Sales Report by RealtyTrac. The number of foreclosures is up slightly compared with 2009, a year in which foreclosures were up 2,500% from 2005.  Sixty-four percent of homes sold in Nevada in the first quarter of 2010 were foreclosures -- the highest in the nation -- followed by California and Arizona. Other states where foreclosures accounted for a third of all home sales were Florida, Georgia, Idaho, Illinois, Massachusetts, Michigan, Oregon and Rhode Island.

Most mortgage contracts include an acceleration clause, which gives the lender power to demand accelerated repayment if certain agreed-upon terms are violated. If the borrower falls behind on monthly payments or fails to notify the lender of a property transfer, for instance, the lender can demand that the entire debt be paid immediately. If there is no acceleration clause and terms have been violated, the lender may still be able to file suit against the borrower to recoup the debt.

The borrower may contest a foreclosure in court by challenging the validity of the debt. If repossession is imminent, the debtor must seek a temporary restraining order. If the lender feels that foreclosure is not in their best interests (such as if the value of the property is less than its outstanding mortgage), they may renegotiate with the borrower by lowering the interest rate or premium. Although several government incentives promote renegotiation, most lenders are too wary of re-default to consider it as an option.
If attempts to prevent the foreclosure fail, it will proceed in one of the following three fashions:
In summary, unpaid taxes, mortgage payments and/or HOA fees can result in a property foreclosure, and the process by which this can take place varies by region and circumstance.

Buying a Foreclosure
Short Sales
More inspection articles like this