by Nick Gromicko, CMI®
Linoleum is a natural flooring material known for its complex, colorful patterns and widespread use during the late 19th and early 20th centuries. InterNACHI inspectors may encounter linoleum in older homes, although newer, green home designs have incorporated the material for its purported eco-friendly characteristics. 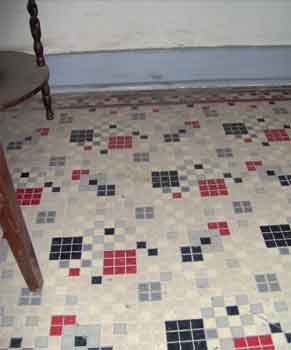 The major constituents of linoleum, in order of most to least composition by weight, are as follows:

Between the time of its invention in 1860 and its replacement by other floor coverings in the 1950s, linoleum was considered to be an inexpensive, durable and flexible material for high-use areas, especially kitchen floors and hallways.

In 1882, Walton developed inlaid linoleum, in which patterns extended all the way to the backing cloth.  Embossed inlaid linoleum was developed in 1926. Heavier-gauge linoleum developed in the early 20th century to meet the needs of U.S. battleships and was thus known as “battleship linoleum,” but it was removed after the 1941 attack on Pearl Harbor due to flammability concerns, although it continued to be installed in public office buildings and other high-use areas.
High-quality linoleum is sufficiently flexible to be used where more rigid materials, such as ceramic tile, would crack. Its resilience and give make standing easier and reduces breakage from dropped items, while its water resistance enables easy maintenance. Linoleum can be fashioned into a variety of appearances, from replication of carpets and woods to complex floral and geometric patterns. Brightly colored game-board patterns can be made for children’s playrooms, and custom designs are limitless. Modern versions are available in sheets and tiles that may be glued directly to the subfloor, or it may be installed as floating tiles, in which the tiles or panels interlock but are not directly fastened to the subfloor, much like DIY wood flooring.

Linoleum to Vinyl, and Back Again

Linoleum’s use as an inexpensive floor covering material in homes and businesses was replaced in the 1950s by polyvinyl chloride, known as vinyl. Recently, however, linoleum’s ecological, non-allergenic and anti-microbial qualities have allowed it to make a comeback. Commonly found under i 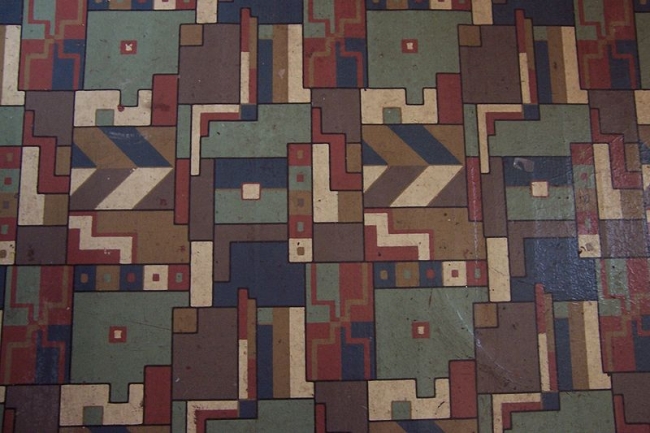 ts trademark name Marmoleum® and manufactured by Forbo Flooring, linoleum is commonly installed in green homes and germ-sensitive environments, such as hospitals and other healthcare facilities.

Vinyl is more common in newer homes, and while it has similar durability and flexibility compared with linoleum (and is even colloquially referred to as linoleum), this synthetic product made from chlorinated petrochemicals is wholly different from its natural predecessor. Vinyl is generally considered brighter, more translucent and easier to maintain, but it’s considered less eco-friendly; phthalates and heavy metals leak from the roughly 1.5 million tons of vinyl discarded annually in the U.S., and it releases harmful dioxins when burned.
Differentiating between the two materials can be challenging, but InterNACHI inspectors and homeowners can use the following clues:
Inspection Tips
Inspectors may look for the following defects in linoleum:
Maintenance Tips
Inspectors can pass on the following maintenance tips to their clients:
In summary, linoleum is an all-natural flooring material with a long, colorful history that's installed in many older homes and businesses. It remains relatively unchanged since the 1860s but is sought after today by ecologically minded builders and homeowners. Inspectors should know how to differentiate linoleum from its alternatives and inspect for defects common to the material.