by Nick Gromicko, CMI®, Kenton Shepard and Kate Tarasenko
A grade stamp is printed on lumber produced in North America, but what does it mean?
Since lumber comes from a natural source, much of it has naturally occurring defects, such as large knots or splits, and these can reduce its strength. Because of these and less obvious defects, lumber that leaves a sawmill must be appraised by trained inspectors and assigned a grading stamp. 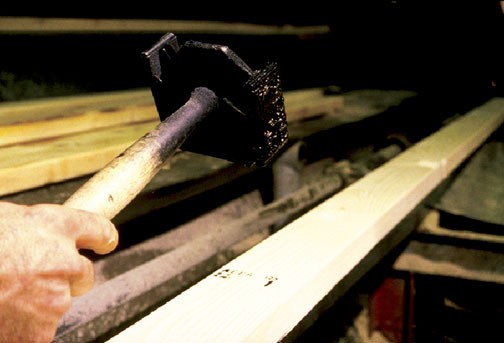 Why are grade stamps required?
What information is included in a grade stamp?

Inspectors are most likely to encounter #2 structural grade wood in houses.

Lumber is dried for the following purposes:

Keep in mind that lumber, which may leave the mill very wet, is wrapped in plastic and stays wrapped until it’s uncovered at the job site. It can retain a lot of moisture and develop large mold colonies, which are then incorporated into the walls of the home when that lumber is used for framing.

Wood-constructed homes, roof shakes and shingles, exterior decks, and children's play equipment that were built before 2004 and not made of cedar or redwood were likely constructed using wood that was pressure-treated with CCA, or chromated copper arsenate.  CCA is comprised of arsenic, chromium and copper.  In wood, CCA is used as a chemical preservative.  CCA is also a pesticide.

The U.S. Consumer Product Safety Commission (CPSC) and the U.S. EPA (Environmental Protection Agency) received several petitions in 2001 asking that the use of CCA in wood playground equipment and other outdoor structures be banned because of concerns that physical contact with the wood and surrounding soil could increase the risk of certain kinds of cancer caused by the arsenic contained in CCA.  Although an official ban was never imposed, several manufacturers voluntarily discontinued using CCA in their wood products.

However, wooden structures and residential components that use CCA pressure-treated wood may still exist in or on a property.  Homeowners who are concerned about this can contact their local health department for information on how to have those structures and components tested for arsenic, along with information about their risk of exposure.

Home inspectors can check suspect lumber for an end-stamp that has the following information:

(Image courtesy of the CPSC and the EPA)

In summary, information about the wood's quality is contained in grading stamps, which are placed on every piece of manufactured lumber.
Some information in this article was provided by the U.S. CPSC and the EPA.