Metal is used as a roof-covering material in several forms, including metal panels, and formed metal shingles and tiles. 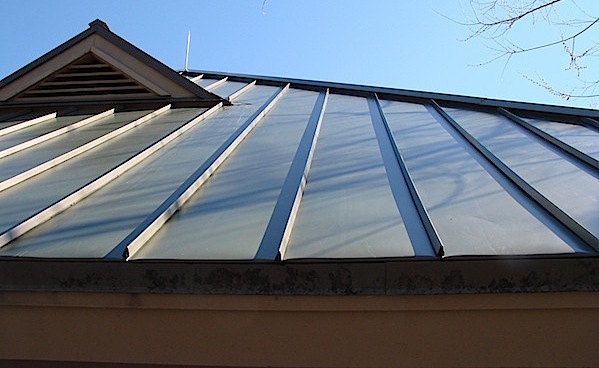 Long, narrow metal panels are typically installed up and down the roof and overlap in a fashion similar to shingles. They may have one of a variety of seam types. Hail may dent metal panel roofs but seldom causes functional damage because the panels are well-supported by direct contact with the substrate over most of the surface, leaving them highly resistant to denting by hail. When metal panel roofs suffer functional damage, it’s often caused by hail damaging a seam or trim, which may then allow moisture to enter the roof structure.

Possible scenarios during which functional damage may occur include severe hail damage to especially vulnerable components, such as seams, ridge and hip caps, gabled end trim and eave trim, and any place where panel edges meet, and where damage may allow moisture intrusion and leakage or lower the wind resistance of the affected area.

Sheet metal is formed into various roofing components designed to mimic other types of roofing materials, such as shakes, slate and tile.

Metal shingles are roughly the size of asphalt composition strip shingles, several times wider than they are tall. They’re also usually hollow, so their resistance to impact depends on the gauge of the sheet metal from which they’re made. Because folds in the field of the unit can add strength, impact resistance is also affected to some degree by the formed profile. 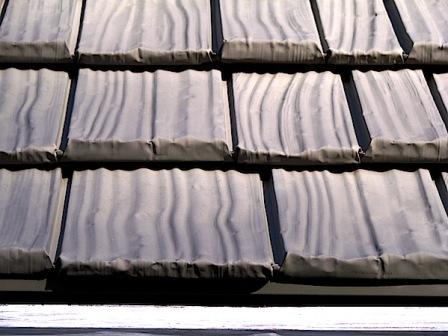 Metal shingle roofs are damaged more easily than metal panels because they typically rest on only the substrate along their edges, leaving most of each shingle unsupported. Indentations from hail are visible in the photo below, although they aren’t serious enough to be called functional damage. 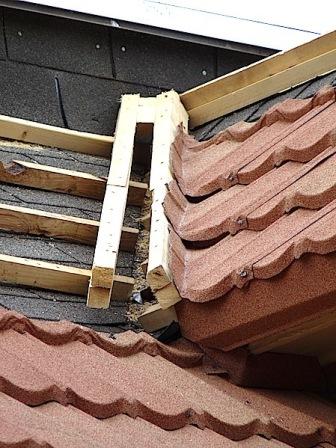 You can see in the photo below the light gauge of which metal shingles are made, and how lightly both the field and cap shingles along the hip are supported. 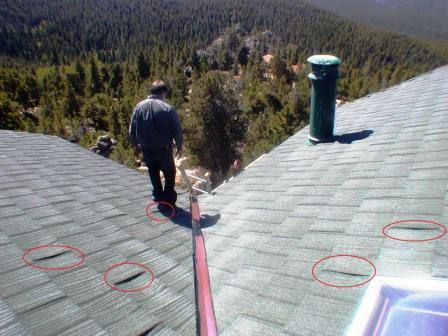 Damage from footfall tends to bend the entire shingle. Hail damage causes round indentations similar in size to the hailstones that caused them.

Hailstones may dent and distort metal shingles so severely that interlocking seams lose their integrity and leak, or they may lose much of their wind resistance. Either of these conditions constitutes functional damage.

Metal is sometimes formed to look like clay barrel tiles.  From a distance, they may be mistaken for clay. 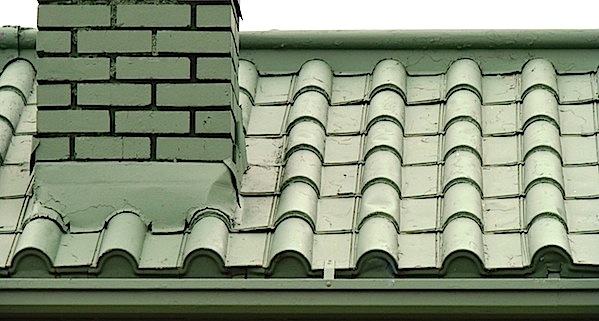 Tiles like these have fairly good hail resistance because the flat portion of each tile bears directly on the substrate and the other portion is arched, which is a shape that resists impact well, but the impact resistance really depends on the gauge of the metal.

Cosmetic damage is generally not paid for by insurance companies, although this varies depending on the insurance company, the way the policy is written, and other circumstances. There are exceptions.

The final decision on whether to pay the damage is made by the insurance company claims adjuster. It depends, to some extent, on how the policy is written. An expensive copper roof damaged in a highly visible area may be covered to some degree because visible damage may cause a loss in home value due to the high visibility of the affected roof slopes.

For this reason, if, during the inspection, you see damage to a metal roof that appears to be hail-related but is only cosmetic damage, you should photograph it and mention it in your report. It’s best to say that it “appears to be” hail damage, since you don’t know for sure unless you saw the damage actually created.

Even when cosmetic damage is paid, the payment may be half, or even less, of the cost of replacement.

One of the easiest ways to determine whether hail has fallen is to look at aluminum combustion vent caps. Because aluminum is a soft metal, the caps dent easily. Bear in mind that damage to the cap may be old and damage to the roof may not be from the same event.

Metal panel roofs that are of good quality and properly installed generally do well in high-wind events. If the edges are well-fastened and proper trim is used, wind has very little chance to enter the space beneath the panels, which minimizes the chance for inflation.

The smooth surface of the panels promotes good laminar flow and helps limit turbulence, both of which reduce the chance of the metal roofing components being pulled loose and blown off, distorted or displaced.

Metal shingles typically have a low profile and generally do well in wind events. Most are fastened at the top and also interlock along their sides, and some types also fasten at the butt, which helps secure them against wind.

The wind resistance of metal shingles depends on their design, profile and installation.