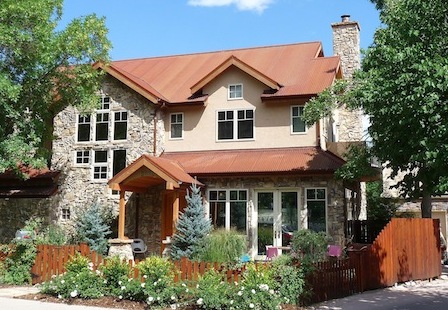 This roof was intentionally rusted.

Corrosion is a defect in metal roofs, and if you understand a little bit about what causes it, you’ll have a better idea of where to look for it. Three types of corrosion affect metal roofs:  galvanic, crevice and filiform.

Galvanic corrosion is an electrical process.

When dissimilar metals are connected by an electrolyte, such as water, the metal in the highest energy state -- the less noble metal -- will corrode. Electrons actually flow from the least noble metal to the most noble metal, and that process is galvanic corrosion.

The severity of corrosion depends on the type and amount of moisture. For example, the potential for corrosion is greater near a seashore than in a dry atmosphere. Moisture in the air in a coastal environment contains salt. Salt water conducts electricity better.  So, moist, salty air is more likely to cause corrosion than moist air that’s not salty.

Galvanic corrosion does not happen in dry conditions because there’s no electrolyte to carry the current between the two metals.

Imagine a steel panel protected by a zinc coating, which is a very common roofing product. At areas where the panel is cut or where holes have been drilled, both zinc and steel can be exposed to moisture, and since zinc is the less noble of the two metals, the zinc will corrode.

Look for galvanic corrosion anywhere a panel has been cut, punctured, abraded or scratched. 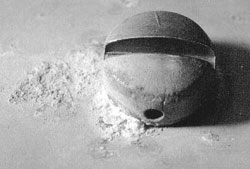 The photo above shows a stainless steel screw in aluminum.

Crevice corrosion takes place when a small volume of stagnant moisture is held next to a surface long enough for the moisture to penetrate the protective coating. The crack or crevice has to be large enough for the moisture to enter, but small enough to create a stagnant zone where it just sits. Crevice corrosion usually takes place in cracks a few thousandths of an inch wide rather than in wider grooves or slots of about 1/8-inch.

Some typical areas where crevice corrosion can develop include: 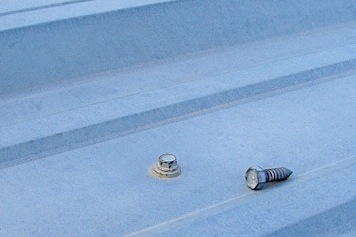 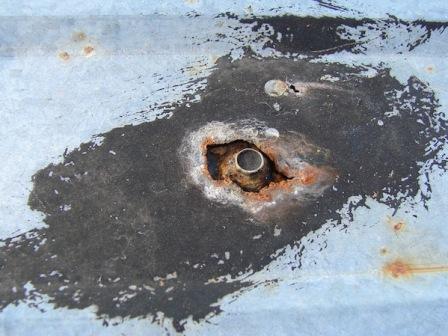 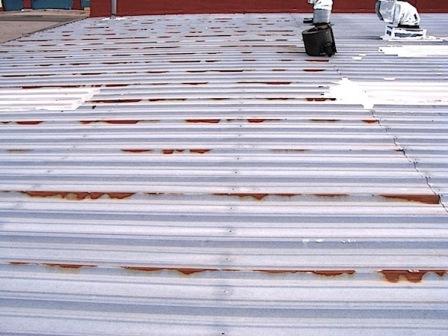 Filiform corrosion appears as a thin filament, usually beneath paint, but sometimes beneath metal coatings.

The filament consists of an active head and a corrosion-product tail. Exactly what that corrosion product is depends on the type of metal that is corroding. 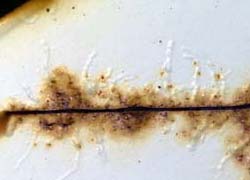 Filiform corrosion doesn’t weaken metal structurally.  It’s a cosmetic issue. Corrosion begins at panel edges and usually proceeds in a straight line. It appears as a network of corrosion-product tails, but an actively corroding head will not cross the tail of another filament, so that’s one way to recognize it.

Filiform corrosion is most common in environments with relative humidity between 65% and 90%.  Humidity below 65% doesn’t affect metal. Humidity above 90% often causes corrosion to appear as blistering.