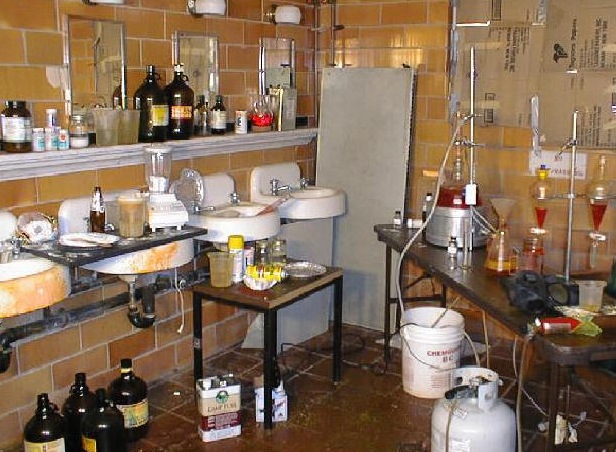 Methamphetamine (also known as "crystal meth" or "meth") is a highly addictive and illegal stimulant. A meth lab is an illegal drug-manufacturing site, often a house or apartment, containing equipment and potentially toxic chemicals required to produce meth.

Facts and Statistics About Meth Labs

Why should inspectors care?
A Case Report:
Jason and Rhonda Holt purchased a house in Tennessee to start their family. They were soon plagued by mysterious illnesses. Their three babies became pale and lethargic, requiring many trips to the emergency room where they were put on respirators and one received steroids. Rhonda developed headaches, and her husband suffered kidney ailments. They endured these illnesses for years until they discovered, five years after moving into their house, that it was the location of a former meth lab. The Holts would need to spend more than $30,000 to rid their home of the toxic chemicals that had saturated the home.

The following conditions are indications that a residence is or was once used as a meth lab:

Testing:
Some inspectors offer meth testing services for additional fees. Generally inspectors charge for each sample test and the more samples taken the better. Nick Gromicko, founder of the International Association of Certified Indoor Air Consultants, says "Once an inspector acquires one positive test, he/she should consider the home to be a former lab at that point, but numerous negative tests should be considered inconclusive."

Should inspectors report meth labs to the authorities?
Inspectors are not DEA agents, and it is technically not the inspector's legal responsibility to report suspicions to authorities. Furthermore, police generally do not care much about former meth labs, which are more of an environmental concern than a criminal issue.  Obviously, it is highly unlikely that an inspector will be invited to perform an inspection in a house that has a working meth lab, but it is possible.  If an inspector encounters an operational meth lab he/she should report it to police.  If an inspector believes that a home, septic tank or yard may be contaminated, he/she should contact the local health department or department of natural resources for advice.
In summary, inspectors should try to notice signs of former meth labs, which can contaminate their surroundings with toxic chemicals.