Inspecting homes often means going into attic spaces, which typically have thermal insulation installed on the floor. As you move through an attic, you’ll disturb that insulation, along with anything resting on the insulation.

Common types of insulation, such as fiberglass, release tiny glass particulates into the air when they’re disturbed. Just walking through the insulation is enough to disturb it. These particulates are small enough to be inhaled, and, once you inhale them, they can become lodged in your respiratory system. This can create health problems.

In addition to particulates from insulation, dust can become airborne. “Dust” is really a generic name for particulates that include bacteria and viruses, and other pathogens. Some of these things can make you sick, and some of them can kill you.

Dust masks are inadequate, especially for those with facial hair. They don’t seal adequately to faces. 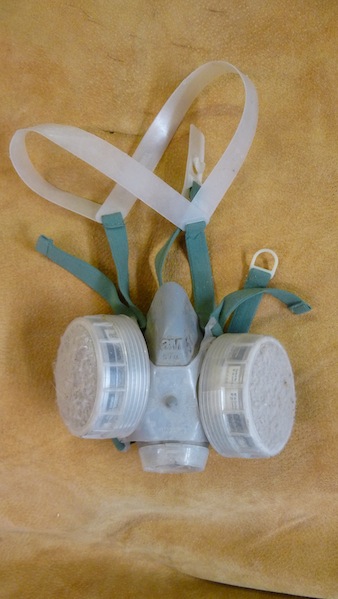 Respirators that cover the nose and mouth are better, but they are ineffective for pathogens that enter your body through the mucus membranes around your eyes. 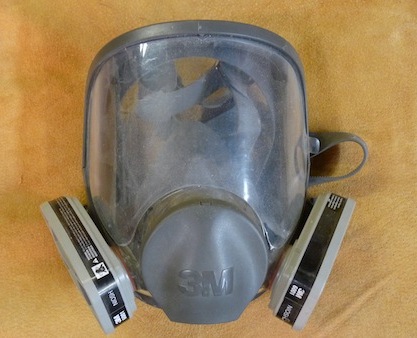 Full-face respirators are the safest, and the most expensive. With both types of respirators, you’ll want to use canister filters designed to filter out small particles, but using filters that are too restrictive may prevent you from getting enough air, especially if you have to struggle through confined spaces.

Histoplasmosis is a fungal infection that you can get from bird feces. Symptoms range from none to serious, depending on the health of the person with the disease, and the extent of the infection. It’s primarily a respiratory infection, but if it spreads to other organs, it can be fatal.

Raccoon roundworm encephalitis is a very serious (and potentially fatal) disease that requires a long recovery period. According to the U.S. Centers for Disease Control, infected raccoons commonly shed millions of roundworm eggs each day in their feces. These eggs can survive for years under adverse conditions. You can become infected by breathing dust in enclosed spaces in which raccoons have been living, such as attics. In parts of the U.S., such as the West Coast, Midwest and Northeast, local infection rates among raccoons run as high as 80%. In 2003, only 25 cases were reported, but this disease is difficult to diagnose. Of those 25 infected people, five of them died. You may not be able to tell if raccoons have lived in the attic you’re inspecting. If you see raccoon scat on the roof or in the attic, mention it in your inspection report. This is what raccoon scat looks like: 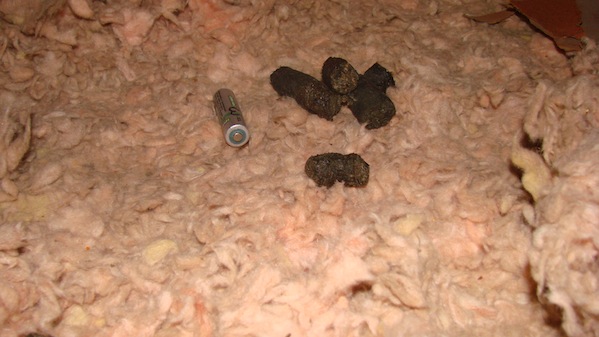 One home inspector who was diagnosed with roundworm encephalitis described his condition:

“Encephalitis is worth worrying about in this business. I got it three-and-a-half years ago.  [Symptoms included] wildly varying fever and occasional loss of consciousness. Scared me and my family badly. Creamed my memory, and I am now slightly dyslexic.”

Hantavirus is another potentially fatal virus that’s transmitted through rodent droppings and urine. You might come into contact with this virus in either a crawlspace or attic. Infected rodents have been found throughout the U.S. 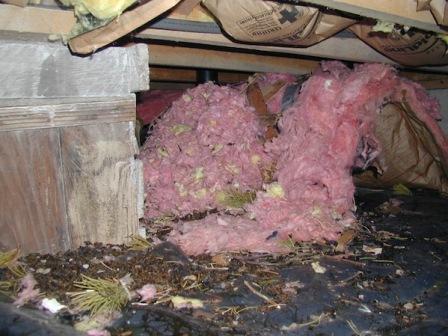 This particular condition was found in a crawlspace, but could appear in an attic, as well. The home had been occupied solely by pack rats for two years. The dark areas on the plastic soil cover are feces and urine.

If you find a similar condition in a home you’ve been asked to inspect, don’t enter it. Recommend that the crawlspace be inspected by a qualified home inspector after the animals have been removed, their point of entry has been blocked, and the area disinfected by a qualified contractor. Most inspectors charge a re-inspection fee, but that’s up to individual inspector.