by Nick Gromicko, CMI®
Oriented strand board (OSB) and plywood are wood structural panels made by compressing and gluing pieces of wood together. While OSB and plywood appear similar and are generally interchangeable, the different ways that each material is manufactured contribute to each having its own unique strengths and weaknesses.

What are they, and how are they made?

OSB is manufactured from heat-cured adhesives and rectangular- shaped wood strands that are arranged in cross-oriented layers. Produced in large, continuous mats, OSB is a solid-panel product of consistent quality with few voids or gaps. The finished product is an engineered wood panel that shares many of the strength and performance characteristics of plywood.

Plywood is made from thin sheets of veneer (layers of wood that are peeled from a spinning log) that are cross-laminated and glued together with a hot press. Throughout the thickness of the panel, the grain of each layer is positioned perpendicular to the adjacent layer. The finished product is made from an odd number of layers so that a balance is maintained around its central

access.  Since it is made from whole layers of logs rather than small strands, plywood has a more consistent and less rough appearance than OSB.

A few facts about OSB and plywood:

In favor of OSB: 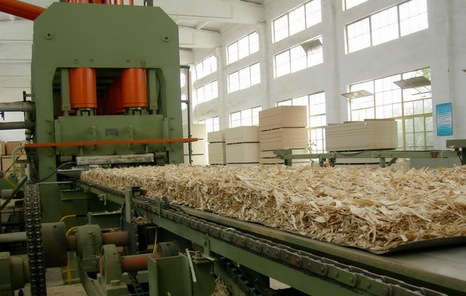 In favor of plywood:

InterNACHI Note:  Much of the information above that favors plywood over OSB is summarized from a study by Georgia-Pacific, a building materials manufacturer. While Georgia-Pacific manufactures both materials and thus has no obvious bias, the study does not state whether it compared multiple brands of OSB and plywood or merely their own.
In summary, OSB and plywood, while used for the same purposes, perform somewhat differently.

Bamboo Construction and Inspection
More inspection articles like this