The pine beetle, also known as the mountain pine beetle, is an insect native to the forests of western North America. Periodic outbreaks routinely kill 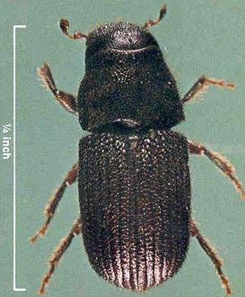 large stretches of pine forest and are a concern for homeowners in certain mountainous regions.

A few facts about the current pine beetle outbreak:

How are trees damaged?

Female pine beetles bore into a tree's vital inner bark, and then tunnel vertically, creating galleries. Upon entry into the bark, the female introduces a

fungus that impairs the tree's circulatory system and reduces its ability to repel the attack. The primary purpose of this fungus is to provide hatched larvae with a food source. Females emit a pheromone to attract males for mating, which also attracts other females, causing a mass attack. After mating, females lay eggs that hatch into larvae in several weeks. The larvae feed on the host tree as temperatures warm up the following spring. They tunnel horizontal galleries from the vertical egg chambers and eventually girdle the tree, killing it. By summer, the larvae emerge as adults and find new trees to infest.

Infected trees can be identified in the following ways:

Defensible space and other concerns for homeowners:

Unfortunately, the most serious damage inflicted by pine beetles has nothing to do with aesthetics or lost tourism revenue. Wildfires, while natural and necessary, become far more devastating and widespread during pine beetle epidemics. Felled trees litter the forest, dry out, and make fires more likely. For this reason, individual property owners as well as whole communities have begun enlarging existing areas of defensible space to protect their homes. This summer, fire crews in the Colorado mountain towns of Vail and Aspen have cleared many acres of trees that had been killed by pine beetles in order to protect the communities from wildfire. Homeowners who live in areas affected by pine beetles need to examine their trees periodically for evidence of infestation in order to take steps to protect their homes from the potential spread of fire. Fire is not the only hazard posed by dying trees, however; they can shed their branches and needles on rooftops, clogging gutters. Falling trees can cause injury, death or property damage, especially on heavily forested properties.

Tips that InterNACHI inspectors can pass on to their clients:

In summary, pine beetles are a threat to homeowners who live in certain regions.