Polyurethane spray foam is a versatile insulation material that is sprayed into building cavities where it quickly expands and molds itself to its surroundings. It is available in "closed-cell" and "open-cell" varieties, each of which offers advantages and disadvantages, depending on the requirements of its application. The following guide briefly explains the differences between these insulation options. 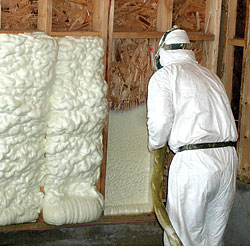 Closed-cell polyurethane foam (CCPF) is composed of tiny cells with solid, unbroken cell walls that resemble inflated balloons piled tightly together. The cells are inflated with a special gas selected to make the insulation value of the foam as high as possible. Like the inflated tires that hold up an automobile, the gas-filled bubbles, when dried, create a material that is strong enough to walk on without major distortion. Wall-racking strength can be enhanced when CCPF is applied, and its strength makes it preferable for roofing applications. The high thermal resistance of the gas gives CCPF an R-value of approximately R-7 to R-8 per inch, according to the U.S. Department of Energy (DOE), which is significantly better than its open-cell alternative. It also acts as a vapor barrier, making it the product of choice if the insulation is likely to be exposed to high levels of moisture. Its density is generally 2 lb/ft3 (32 kilograms per cubic meter [kg/m3]).

Over time, the R-value of CCPF can drop as some of the low-conductivity gas escapes and is replaced with ordinary air, a process known as thermal drift. Research performed by the DOE revealed that most thermal drift occurs within the first two years after the insulation material is applied, but then the foam remains relatively unchanged unless it is damaged.
Foam Is a Fire Hazard
Semi-permeable rigid foam insulation and spray foam insulation (foam plastic) on the inside of basement foundation walls is often found during an inspection of the full-basement foundation of a house.  Its use could be a good strategy for a moisture-resistant finished basement. However, fire and smoke characteristics of this type of insulation require that it be covered with a fire-resistant layer, such as gypsum wallboard (drywall).
Sometimes this requirement works fine when the basement is being finished. This requirement of having spray foam insulation to be protected by a thermal barrier is found in the International Residential Code (IRC) 2015 Section R316. In most cases where spray polyurethane foam insulation is installed, the foam should be separated from the interior living spaces by an approved thermal barrier of at least 1/2-inch gypsum wallboard (drywall), 23/32-inch wood structural panel, or a material tested to meet the acceptable criteria from NFPA. There are a few exceptions to this requirement, including flame spread index ratings.
If a basement will only be insulated and not finished, a fire-rated foam panel or similar fire-rated covering needs to be used. Because the above-grade portions of the basement wall can dry to the outside, fire-rated insulation on these surfaces may be of an impermeable type. For example, it can have a foil facing.  But insulating approaches that restrict the drying potential of below-grade portions of the foundation wall toward the inside should be avoided.

In attics, a thermal barrier is not required when several conditions exist. Those conditions are listed within the IRC Code 2015 Section R316, and they include the attic access is required, the attic space is entered for only maintenance and when repairs are needed, and the foam insulation has been tested or the foam insulation is protected against ignition using a listed barrier material.

Packages and containers of spray foam insulation (or foam plastic) should be labeled and identified if they are delivered to a building site.

Open-cell polyurethane foam (OCPF) is a soft, flexible, spongy insulation with broken cell walls that permit air to fill them. They typically have a density of 0.5 lb/ft3 (8 kilograms per cubic meter [kg/m3]), which is significantly less than closed-cell insulation, as well as having a reduced R-value per inch, although OCPF still has excellent thermal-insulating and air-barrier properties. The foam is weaker and less rigid than closed-cell foams, too. It will require trimming and disposal of excess material as it expands to over 100 times its initial liquid size.

Builders often choose open-cell foam for the following advantages it affords, including:

In summary, polyurethane foam is available in two varieties that are suited for different applications.