The Potential for a Water Crisis

The water we use today is stored in two different ways:  in aquifers and in reservoirs. Together, these methods, along with the infrastructure associated with them, play a major part in powering the U.S. economy. A growing population and the failure to adapt U.S. water policies and maintain our national water infrastructure have left us with a potentially serious threat -- a severe water crisis in the U.S.

Aquifers are huge, naturally-occurring underground lakes filled with permeable rock or unconsolidated materials, such as sand, clay and gravel. The Ogallala Aquifer is so big that it lies beneath portions of eight different states. Water in an aquifer is called groundwater.

As water is pumped from the various aquifers across the U.S., we rely on precipitation and seepage through the ground to re-charge these aquifers. If the rate at which water is being pumped is greater than  the rate of re-charge, the aquifer will suffer from groundwater depletion.

Groundwater depletion can cause a number of problems.

This photograph shows that the ground level in California’s San Joaquin Valley has been lowered about 30 feet in 50 years by groundwater depletion. This aquifer has lost about 20 cubic miles of water in the last seven years.

As the level of the groundwater is lowered by pumping, the earth above an aquifer may lose support. Over time, soil particles will consolidate, which will result in settling, also called subsidence. In some places where pumping has gone on for many years, subsidence is extreme.
Subsidence can damage structures.

This map shows areas of the U.S. experiencing subsidence

Large agricultural areas of the U.S. which have been dependent on groundwater pumping will find their costs of operation rising.

Increased pumping costs can be passed on to consumers until the market will no longer support cost increases, at which point the land use will change.

Populations that depend on aquifers for drinking water will pay more for their water and may find themselves at risk of losing their source of drinking water or suffering a reduction of water quality. 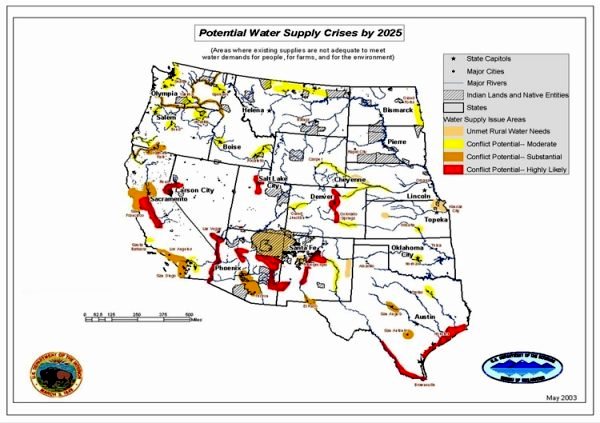 This map shows areas of the U.S. that are likely to experience a water supply crisis by 2025.

Poor Water Quality
Water quality can suffer from several different causes related to groundwater depletion. As water is pumped out of an aquifer and the groundwater level drops, other water may be drawn in to replace it.
Salt Water Intrusion

Coastal aquifers may suffer from salt water intrusion as salt water is drawn into the aquifer to replace receding fresh water.

Water may also be drawn into a receding aquifer from above or below the aquifer. If the water drawn into the aquifer is of poorer quality than the existing water, a water quality problem may appear.

Water drawn into an aquifer may be chemically different, and chemical reactions can take place in an aquifer that degrade the water quality.

It’s important that U.S. policies on water and land use change as necessary to minimize damage from groundwater depletion. In addition to drinking water and agriculture, manufacturing and industry are major users and polluters of water.

Every couple of years, the American Society of Civil Engineers  (ASCE) grades the national infrastructure. In its 2005 assessment, water infrastructure was substandard in the three  major categories, according to the following grades.

According to the Congressional Research Service, of the more than 79,000 dams in the U.S., only 5% are regulated by federal agencies, and the rest are state-regulated. According to the Association of State Dam Safety Officials, the estimated cost for maintenance and repair to prevent life-threatening situations for critical, state-regulated dams is $16 billion. For those that need work but are not in critical condition, the cost is over $50 billion.

The problem is complicated by the fact that 56% of U.S. dams are privately-owned and the owners are responsible for maintenance and repair.

Updating the U.S. drinking water infrastructure will cost $11 billion. In both 2005 and 2006, the annual budget allocated for updating was $850 million, less than 10% of the actual cost.

In 2001, the American Water Works Association estimated that meeting the needs that will develop for drinking water over the next 20 years will cost about $250 billion.

Aging and failing wastewater management systems in the U.S. discharge billions of gallons of sewage into surface waters each year. According to the Association of Metropolitan Water Agencies, to replace and supplement these systems will require a national investment of about $400 billion over the next 20 years.

Overall, that’s over $700 billion to meet our water infrastructure requirements for the next 20 years.

The experiences of the people of Tucson, Ariz., are an example of what can happen as groundwater becomes depleted and distribution infrastructure ages.

For many years, Tucson used groundwater as a source of drinking water. The local groundwater was stable in quality, so even though corrosion of distribution pipes was slowly taking place, it wasn’t noticeable at the kitchen sink.

In 1992, Tucson Water introduced Colorado River water into the drinking water supply for about half its customers, which was about 250,000 people.

This river water was taken from a location near the California-Arizona border and was distributed to customers in central and southern Arizona. The river water had characteristics quite different from the groundwater that the existing distribution system was used to carrying. The river water was more corrosive and began dislodging rust and scale from Tucson’s distribution pipes. Customers complained of water that was discolored, rusty, smelly and foul-tasting. As the river water loosened and removed existing corrosion, pipes developed pinhole leaks, joints failed, and pipe walls burst from pressure.

By the time they had discontinued the use of river water, Tucson Water had received 14,000 complaints and had to pay more than $2 million in damages to customers.

This was a direct result of allowing water infrastructure to age excessively. Of the 4,300 miles of distribution pipes, nearly 220 miles of water mains were made from galvanized steel or unlined cast iron.

The U.S. Bureau of Reclamation was established in 1902 and tasked with finding a way to irrigate the arid West. It did this by building dams and reservoirs. About half of these dams are now more than 50 years old. Less than 10% were built according to modern standards.

Today, the West is the fastest-growing part of the U.S. Between 1990 and 2000, the populations of Colorado, Arizona, Utah, Idaho and Nevada grew by an average of almost 40%.