Polyvinyl chloride (PVC) is a widely used building material praised for its durability, yet criticized for its potential health hazards.
PVC was discovered accidentally in the early 19th century when the polymer appeared as a white solid inside sunlight-exposed flasks of vinyl chloride. The first attempt to use the substance commercially was made by Russian chemists who failed because of the PVC's rigidity and brittleness. In 1926, Waldo Semon, a rubber scientist for B.F. Goodrich, successfully plasticized PVC. It was put to use as insulation for electrical wiring. It became critical to the war effort during the 1940s, and its peacetime use subsequently exploded. Today, PVC is the third most relied-upon plastic in the world, after polyethylene and polypropylene. 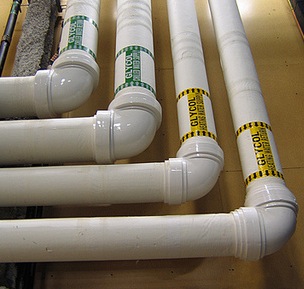 As it is inexpensive, durable, strong, and chemically and biologically resistant, as well as easy to install and replace, PVC is widely used in the following construction applications:

Inspectors can be aided in the identification of PVC by its color, which often indicates its use:  white PVC is used for drain and waste vent pipe and some low-pressure piping; dark gray is used for industrial pressure systems; purple is used for reclaimed wastewater; white, blue and dark gray are all used for cold-water pipe; and green is used for sewer lines.

While PVC is an extremely popular building material, its critics deride it for certain health and environmental dangers, especially when its entire life cycle is considered. Touted for its flame resistance, PVC can smolder unnoticed and release extremely dangerous gasses that present both acute and chronic health hazards to building occupants, fire fighters, and surrounding communities. The following two products of PVC combustion are of particular concern:

PVC has also been blamed for emitting chemical softeners called phthalates (in vinyl flooring), lead additives (in blinds), and toxic glues. For instance, one study of PVC shower curtains found that they released phthalates capable of causing nausea and damage to the liver and reproductive system. Vinyl chloride, an essential component of PVC, is a carcinogenic and potentially explosive gas with a mild, sweet odor. It can enter drinking water released from contact with PVC pipes, according to the U.S. Environmental Protection Agency.

Disposal of PVC is problematic because its unique characteristics make ordinary disposal unsafe or otherwise difficult; it does not decompose when buried, and it releases dangerous gasses when incinerated. Much of the PVC used in buildings eventually winds up in landfills where it can easily smolder and release a significant amount of deadly gasses. Manufacturers counter this argument by pointing out that PVC's resilience makes it appear in landfills less than its alternatives, and that some landfill liners are actually composed of PVC.
Thermal depolymerization has been developed to convert used PVC into other usable materials, but this method is rarely employed. The multitude of additives used to create PVC make large-scale recycling so cumbersome and expensive that manufacturers find it more cost-effective to make new PVC. Only 0.5% of the plastic is actually recycled, according to the Healthy Building Network.
In summary, the qualities that make PVC an ideal and popular building material must be weighed against its potential health dangers.  The health effects of PVC on humans and the environment is a contentious issue, and inspectors and homeowners can perform their own research to stay informed.