Rooftop rainwater catchment is a system for gathering rainwater from residential or commercial roofs for direct use. This system is employed for a variety of reasons, foremost 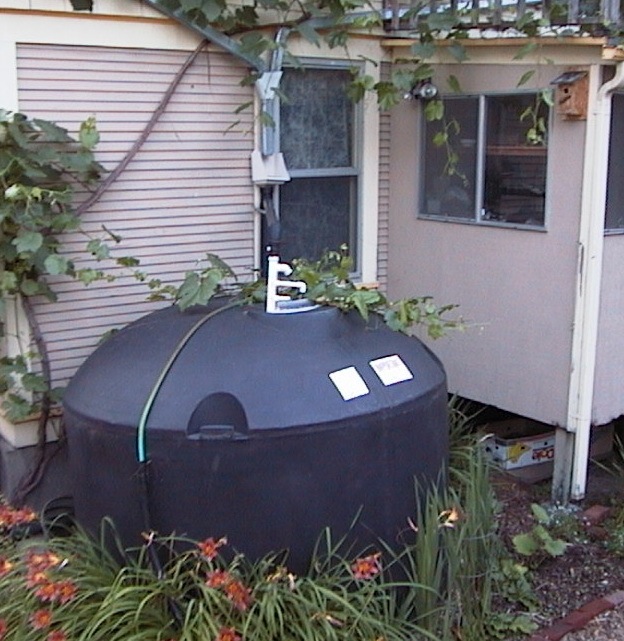 of which are: survival in a locale that lacks municipal water service; reducing the water bill; survival during drought; conservation of municipal water resources; and self-reliance. Common uses for rainwater catchment are consumption, crop irrigation, and household uses, such as flushing toilets and washing clothes.

Rainwater catchment systems vary, from the very simple, such as using a rooftop gutter that drains into a drum container, to the more complex, such as systems that use many tanks, pumps and control mechanisms. Large cisterns hold the captured water and prevent evaporation and contamination from external sources. Rainwater captured for drinking is usually filtered and then purified, while rainwater meant for irrigation and household use requires less intervention.

Although reported illnesses resulting from drinking rainwater are rare, rainwater may carry with it such pollutants as animal excrement, sand, dust, algae, and dissolved gasses, such as CO2. Roofs treated with metallic paint or asbestos may be unsuitable for rainwater collection. It is better not to collect the first rain after a dry spell in order to minimize much of this risk. Also, avoid pulling rainwater from the bottom of a cistern, as that is where accumulated matter, if any, generally settles.

Inspection
While inspection of catchment systems may exceed InterNACHI's Standards of Practice, some tips for inspectors to be aware of include the following.  Homeowners considering harvesting their own rainwater can benefit from these tips, as well.
In summary, rooftop water catchment systems can provide a significant, free source of water for both human consumption and household use, if they are properly constructed and implemented.