This article of the Mastering Roof Inspections series is the first installment covering conditions common to the five major steep-slope, residential roof-covering materials, including:

Although each of these articles covers the basics, they also go into detail. Information was pulled from a wide variety of sources, including the home inspection and insurance industries, and various sectors of the roofing industry. In development, we worked with consultants, contractors, suppliers and manufacturers.

We’re going to start by identifying some basic roof styles and features. 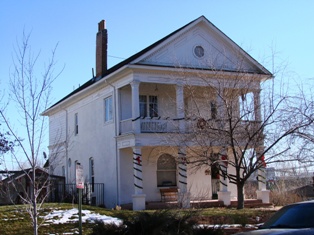 Gable roofs are one of the most common styles. They’re easily identified.  They have two slopes and the ridge extends the length of the home. The lower, level edges of the roof are called the “eaves,” and the sloped edges are called the “gables” or "rakes.” (We use both terms.) 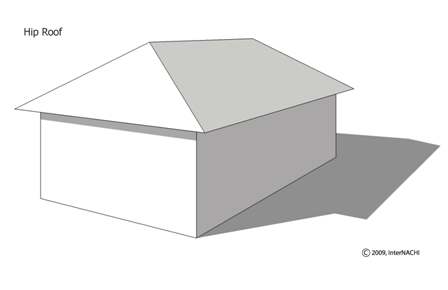 There are two types of hip roofs, and both have four slopes.  The basic hip roof has a level ridge, but the ridge doesn’t extend all the way to the exterior walls. Instead, hip rafters slope diagonally down to each corner. 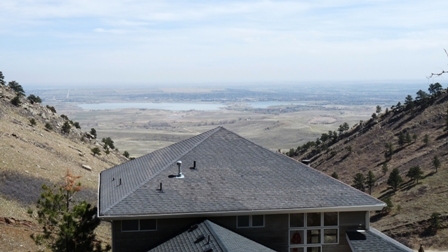 The photo above shows a “full hip” roof. Full hip roofs have no real ridge. The hip rafters all meet to form a point at the peak of the roof. 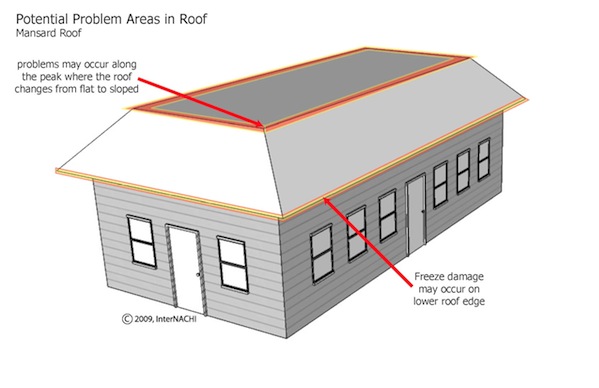 Mansard roofs were invented by the French when owners were taxed by the height of the building as measured to the roof eave. They’re short, steep roofs installed around the perimeter of what’s usually (but not always) a flat-roofed building. 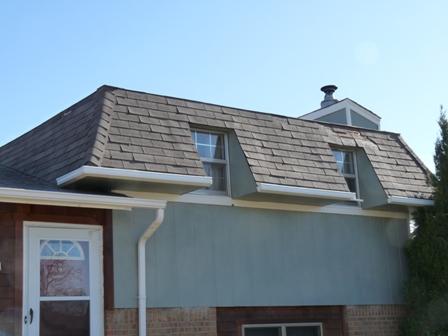 Some of these roofs are nearly vertical, and this can cause installation problems which will vary with the different types of roof-covering materials. 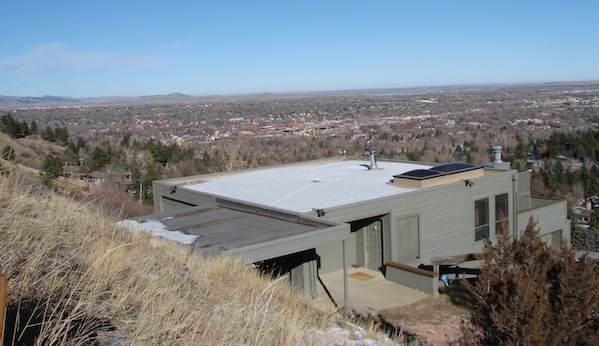 “Pitch“ is the term used to describe the degree of roof slope. Flat roofs have one slope but very little pitch. A typical pitch would be ¼-inch per foot.

Flat roofs may drain over the roof edges or through scuppers installed in a parapet wall built around the perimeter. 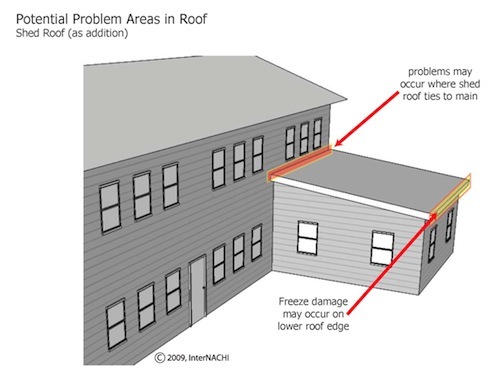 Shed roofs have one slope but more pitch than a flat roof.  Because shed roofs are often used for additions, one potential problem area is along the upper edge of the shed roof where it ties into the wall of the original home.
Gambrel 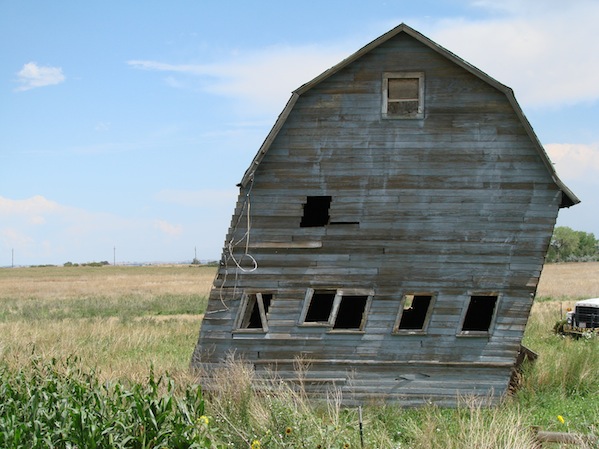 Gambrel roofs are usually associated with barns but are not uncommon on homes. They have two slopes, each of which changes pitch in a convex manner. The point at which the roof changes pitch should have metal flashing.

This barn is located in an area so windy that whenever the wind stops blowing, all the chickens fall over.

Bonnet roofs have a change of pitch but are concave -- the opposite of a gambrel. 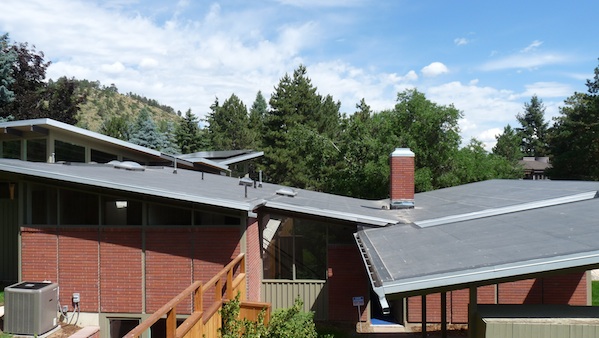 This is a style seen less often, but you will see them occasionally. When you inspect a home with a butterfly roof, look closely at the ceiling and floor beneath the low point.

The house in this photograph had recently sold and the sellers had hired a contractor to install a new roof. The buyers moved in… it rained… and the roof leaked. The buyers had to hire both a (different) roofing contractor and a floor contractor. 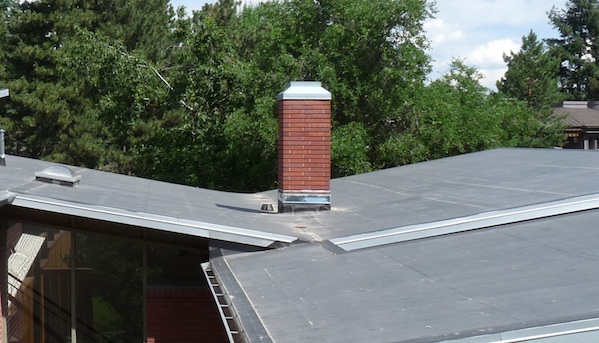 The roof wasn’t likely to leak due to the design alone, so this well-known architect designed not one, but two penetrations into the low point. The only things lacking are an anchor and a bilge pump! 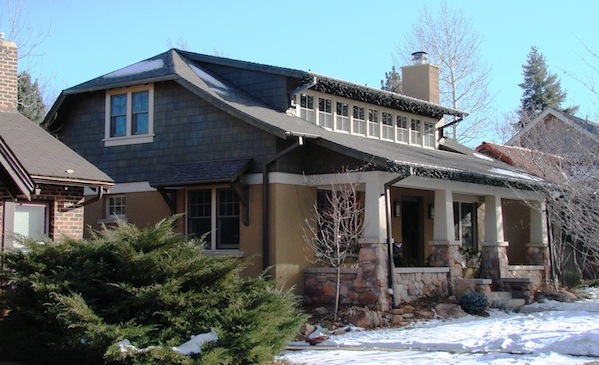 These photos show roofs with clerestory windows. Although the term “clerestory” refers to the position of the windows, it also generally describes their position as incorporated into a shed roof. In other words, “clerestory” is commonly used to refer to the combination of roof and windows. 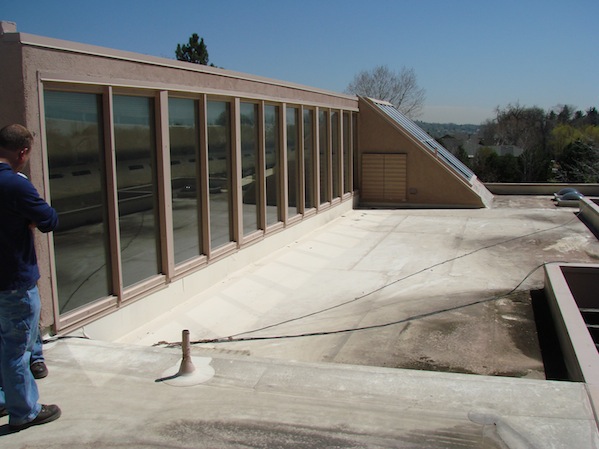 Clerestory windows should have adequate clearance between the sills and the roof below in areas with heavy snowfall. This home doesn’t and is more likely to leak. They should also have proper sidewall flashing. 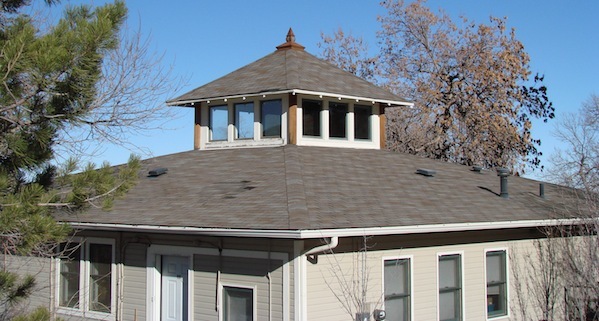 Cupolas are small structures built into the peak of a roof, often to provide light to the area below. The inspection concern is the roof framing supporting the cupola. Although the framing will typically be hidden behind interior wall-covering materials, look for signs of movement, such as cracking. Other vulnerable areas are headwall and sidewall flashing. 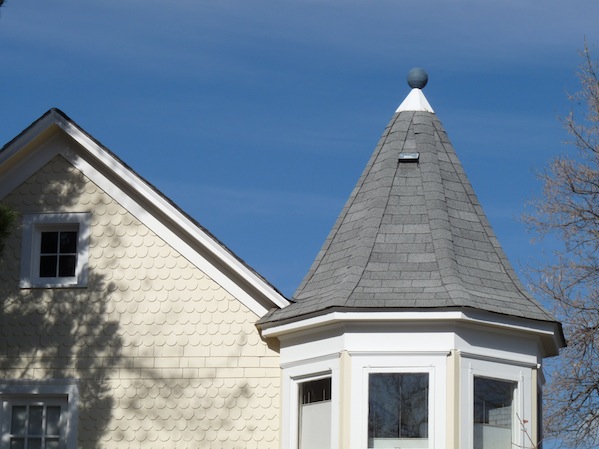 Conical roofs are often used to cover towers, as you see here, and are often steep. This first photograph shows a conical roof that is actually a series of tapered flat roofs, creating a series of hips. 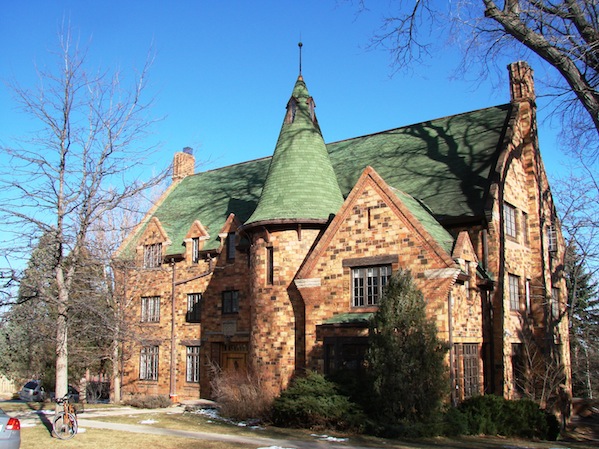 Installing round conical roofs requires special roofing techniques to get shingles to lie flat, especially near the peak. 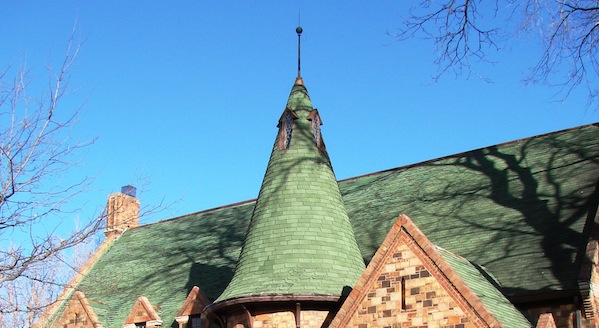 In this photograph, you can see that four tiny dormers have been installed near the peak.

Inspecting these steep roofs closely is difficult (or impossible) without special equipment, so you should get as close as you can using binoculars to look for signs of leakage beneath these roofs. 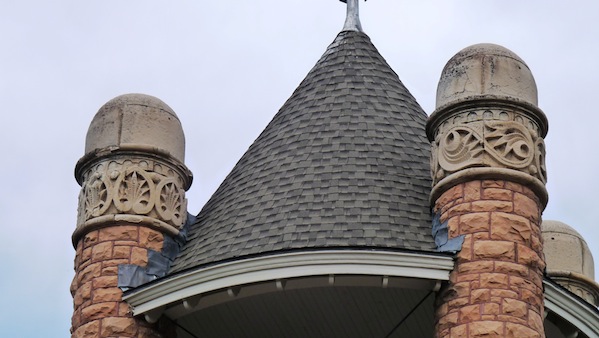 Inspection concerns include flashing at the round sidewalls and areas at which conical roofs intersect with roofs of other shapes. Specially-shaped crickets or flashing may be  needed to provide long-term protection against leakage. Crickets are shown here outlined in red. 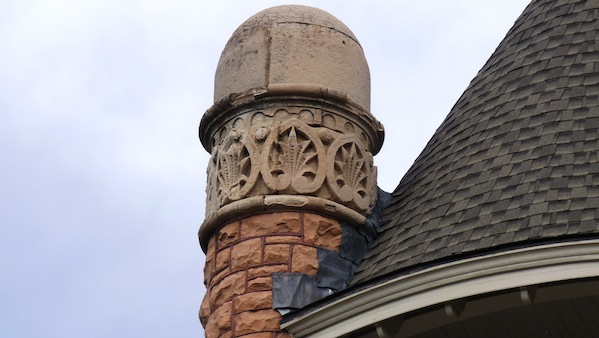 These areas of intersection (which are difficult to see because they’re on the backside of the roof) often collect debris, such as leaves and sediment. This debris holds moisture against the roof and flashing, which often corrodes more quickly than on the rest of the roof. So, the areas of intersection are difficult to see, and they’re weak point,.

If you can’t confirm the condition of the roofing on the backside of a conical roof, you need to disclaim it and recommend inspection by a qualified roofing contractor. A contractor may need to hook a ladder over the ridge in order to get high enough on the roof to see the backside of a conical roof clearly. This is especially true when the roof is covered with fragile materials, such as slate or tile. 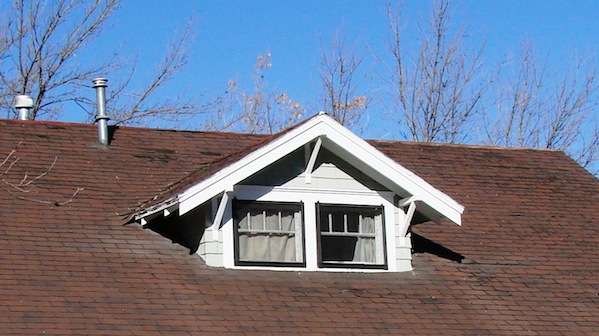 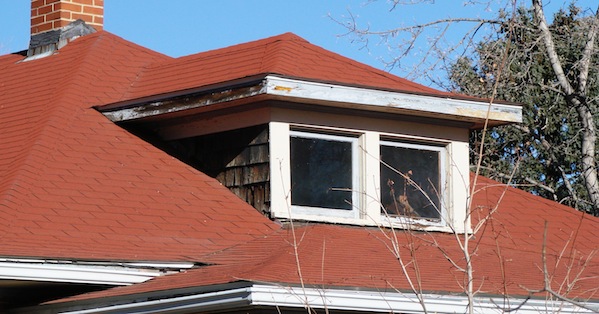 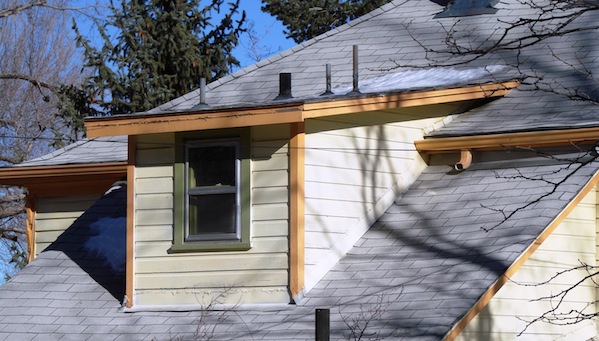 Dormers are projections built into the slope of a roof. Here, you see dormers with gable, hip and shed roofs. Inspection concerns are valleys, headwall and sidewall flashing. 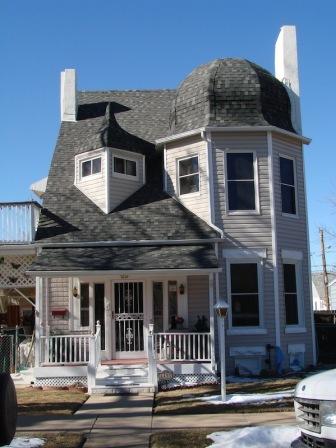 …you’ll see roof styles for which there really is no name.
The structure above is a dormer because it’s a projection built into the slope of a roof. The structure below is a second story, since the exterior wall is continuous from foundation to roof. 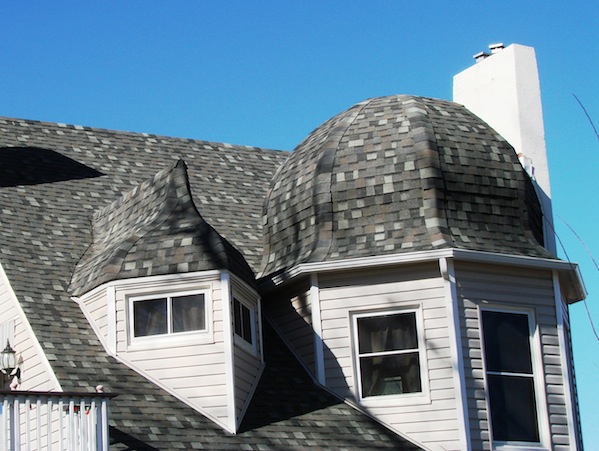 The only limitations to the number of styles possible are the human imagination, the laws of physics, and the depth of the homeowner’s pockets.
Each different style of roof and roof feature has its weak points. Once you learn what these are, you’ll know where to expect problems. With all roofs, weak points are: