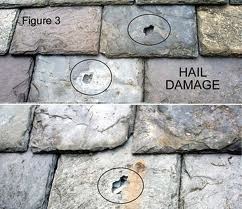 Hail damage to a slate roof

Slate tiles may be punctured, cracked or broken by hail. Any of these conditions could be deemed functional damage if the damage is serious enough.  Because slate is a sedimentary stone composed of layers, hail damage may appear as a slate with a portion of layers missing. This condition would be considered functional damage only if it were severe.

Slate becomes soft and brittle as it ages, and old slate is more likely to suffer damage than newer slate. As slate ages and deteriorates, less impact energy is required for hail to damage it.

On a home whose roof you can view clearly, you may be able to inspect it from the ground with binoculars, from a window or balcony, or from a ladder at the roof edge. If you inspect a home with significant portions of the roof not visible from any of these vantage points, you should recommend inspection by a qualified roofing contractor. A contractor has the equipment to access those portions of the roof that you can’t see safely or without risk of damaging the roof. 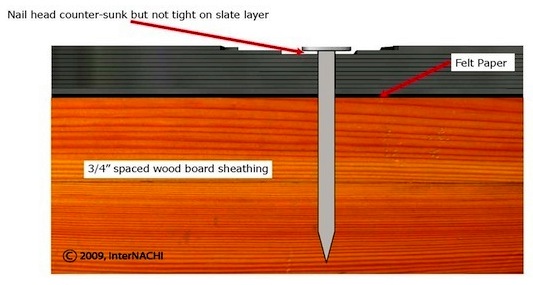 When nail holes are punched in slates, they’re punched from the backside. As the punch penetrates the slate, it creates a clean entry hole, but as it emerges from the other side, it breaks out some of the outer layers, creating a crater that forms a countersink hole for the nail heads. Impact damage looks similar. The object striking the slate, such as a hailstone, typically leaves a clean entry hole, and a larger, ragged exit hole. But if you see a slate with a ragged hole on the upper surface, it may have been caused by a nail left protruding at the time of installation.

Thick slates sometimes have nail holes drilled, which does not provide a countersink, but thick slates are generally able to handle this condition adequately. Standard slates should always be punched, not drilled.

Occasionally, slates are installed using a sidelap.  In this case, most of the roof may have only one layer of slate. A roof with a single layer of slate is more likely to develop leaks as the result of a hailstrike.

External impacts are not limited to hail, but may be from windborne or thrown rocks, golf balls, or even bullets. In deciding whether damage is from hail, it’s important to look at the overall pattern of damage across the roof. 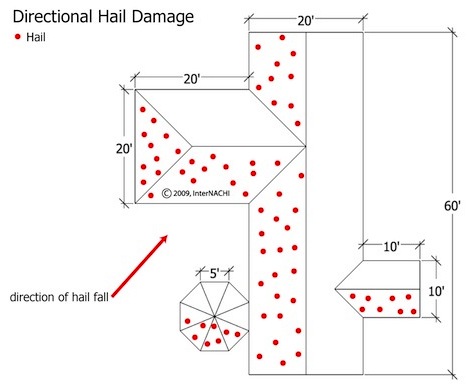 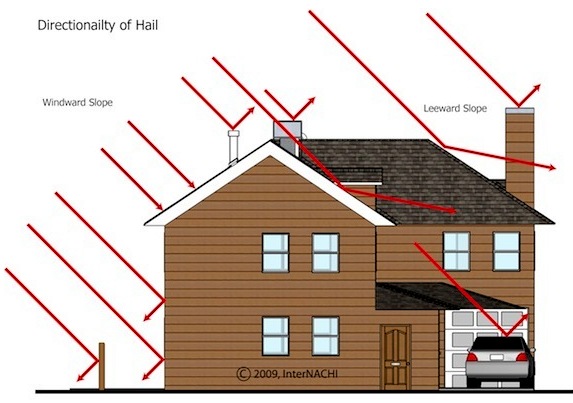 Hail fall is random, and it may be directional, meaning that the damage may be concentrated more on-slope, facing the direction from which the wind blew during the storm, as illustrated above.

Slate tiles may be punctured or broken by hail. Either way, slate roofs are often repairable. Contractors who are unscrupulous or who don’t have much expertise with slate roofs may condemn an entire roof because some slates are damaged. The roof may look like a planetarium from inside the attic, but, in fact, damaged and broken slates can be fairly easily replaced by knowledgeable workmen. 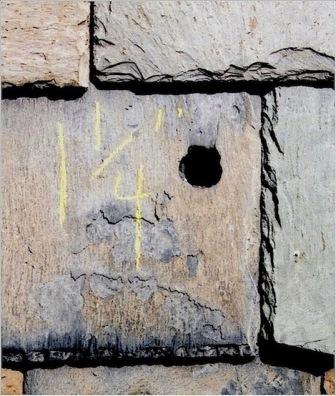 Remember that when slate is punctured, the impact leaves a clean hole on the impact-side, and a ragged, cratered hole on the opposite side.

Although slate tiles are rigid, heavy and low-profile, they are subject to both direct and indirect wind damage, but they are less likely to suffer direct damage than lighter-weight roof-covering materials, such as asphalt composition shingles.

Direct wind damage can occur when slates with corroded fasteners fail during a windstorm. In this situation, wind might tear the slates loose.

Nail length can also affect the wind resistance of slate tiles.  Overly long nails used to fasten field slates may blow out the underside of the roof sheathing at each fastener penetration, diminishing the holding power of the nail.

Hip and ridge cap slates are the most vulnerable to wind damage, especially on the windward side of the home, and at the eaves and corners. It’s a good idea to fasten these slates with longer nails because they have to penetrate farther to reach the roof sheathing. If you’re inspecting a home in an area subject to high winds, check the nail penetration while you’re in the attic.

Metal flashing and trim on slate roofs is more likely to suffer damage than the slates themselves.

Indirect damage happens when the roof is damaged by objects blown into it. This includes tree limbs, stones, various types of debris, and even objects commonly found in a yard that can be lifted and hurled by strong winds.

Slates can move around a little bit. On roofs with very steep slopes, wind may cause slates to bang against each other, creating a sound called chatter. Chatter may damage badly deteriorated slates.

According to Joseph Jenkins in Traditional Roofing Magazine, a publication about slate roofs, the four most important areas to address to maximize the wind resistance of a slate roof are: