The purpose of the series “Mastering Roof Inspections” is to teach home inspectors, as well as insurance and roofing professionals, how to recognize proper and improper conditions while inspecting steep-slope, residential roofs. This series covers roof framing, roofing materials, the attic, and the conditions that affect the roofing materials and components, including wind and hail.
PROPERTIES OF SLATE (continued)

Slate is graded according to ASTM standards as  S1, S2 or S3, with S1 being the highest grade.

Slate can be grade-tested by a laboratory for compliance with ASTM standards, but this won’t tell what the remaining lifespan is with any real accuracy. Slate rated S1 may last anywhere from 75 to 200 years or more.  Almost all slate installed on new roofs in North America is rated S1.

ASTM C-406 is the standard used to grade slate. It consists of three separate test types:

Complete grade testing requires about 20 samples for each slate being tested, and is somewhat expensive, so testing is seldom done on residential slate roofs.

The lifespan of slate is directly tied to its quality. Lifespans vary from less than 60 years for some types of Pennsylvania Soft-Vein, to more than 200 years for Pennsylvania Peach Bottom. Different quarries that produce the same color or type of slate may be located on different parts of the same slate deposit. The slate produced by each quarry can look very similar but have different qualities and different lifespans.
Slate quality varies not only among different quarries, but can vary within a single quarry. Different layers can be of different quality. So, as mining in a pit progresses, the quality of the slate can change. You will not be able to identify the type of slate on a roof or estimate its remaining service life by looking at it.

Although the slate itself may be very durable, the lifespan of a slate roof is limited by its weakest component. The slate may be of a type known to last 200 years, but if the fasteners or the crucial underlayment fails after 50 years, then the lifespan of that slate roof is only 50 years.

In addition to being quarried in the U.S., slate is imported from a variety of sources.

Purple and grey-black Welsh slate was imported into cities along the Eastern Seaboard prior to 1840. It generally has an extremely long service life and may still be seen on roofs today.

Large amounts of inexpensive slate have been imported from China since the 1980s. Chinese slate comes in a wide range of colors and quality.  The example below is common. 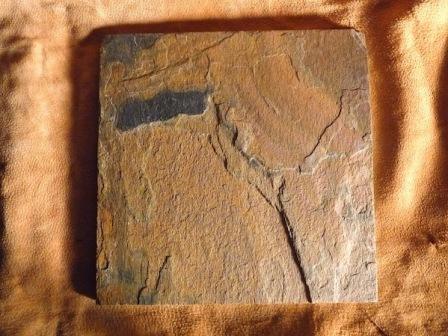 Looking closely, you can see that the slate has cleaved less evenly than the other samples. The different minerals show up as different colors, and you can see that they’re not very uniform across the face of the tile. The dark area in the upper left quarter is likely to have a high carbon content, eventually appearing as a mineral occlusion and failing sooner than the other portions of the tile. It’s generally brittle, so it’s more easily broken than North American slates. It may also be soft, and the colors may be unstable.

Although they may be seen anywhere in the U.S., Chinese slates are most common in California, in the southern U.S., and in states along the Eastern Seaboard.

Performance problems with Chinese slate are more common in northern areas where snow and ice cause a freeze-thaw cycle that can cause delamination.  Homeowners sometimes insist on having these slates installed on roofs even after being told that they will be damaged by frost.

Inexpensive slate with similar properties also comes from India and Brazil. Low-quality, black Spanish slate has been sold in the U.S. since the 1980s. It has oxidizing iron pyrite that appears as rust stains. Spain does produce some very high-quality slate, but very little of it is sold in North America.

It’s common to see these imported slates installed in home interiors, but if you see them on a roof, especially in a cold climate, look carefully for mineral occlusions, color fading, delamination, and broken slates.  Disclaim the slate roof in your report, stating that some types of ribbon slates and imported slates have a reputation for low durability. Recommend that the slate be identified by a specialist. For newer homes, identification may be possible through receipts.  With older homes, a knowledgeable local contractor may be able to state with confidence the origin of the slate. It may be difficult to determine.