Standard slates are of standard size as opposed to custom-cut, and are the most common type of slate. Standard slates are ¼-inch (0.64 cm) thick, plus or minus 1/16-inch. They vary in length and width by no more than 1/8-inch and have a relatively smooth face.

In the past, standard slate tiles were available in up to 30 different sizes. Roofs with standard slates should look flat, even and uniform.

It’s not unusual to see slate tiles with large gaps between them on older utility buildings. 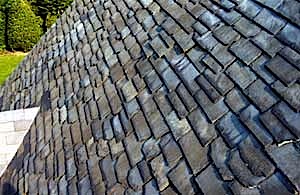 Roofs with textural slate tend to have a uniform look similar to standard slate roofs, but the coarser texture and greater thickness of the slates result in stronger shadow lines, which tend to give these roofs more character.

Textural slates may be manufactured with the same variations as standard slates. 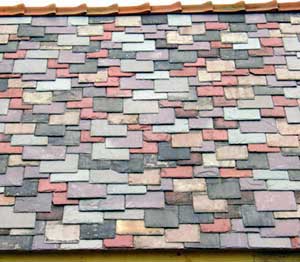 Roofs with slates of intermingled thickness use at least three distinct variations in slate thickness; for example, one home might use ¼-inch, 3/8-inch and ½-inch slates.
Intermingled roofs may have a cobbled appearance and may have more thin slates than thick ones.
In intermingled slate roofs, look to see that variations in the slates' thickness are not preventing them from lying flat.
Heavy Slate 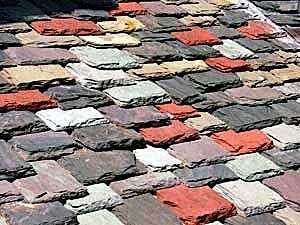 In heavy slate roofs, slates up to 1 inch thick are not unusual, and these slates are heavy and rough. Slates this size may require framing that is heavier than what is typical for a roof, and you should be looking for signs of failure, such as rafter sagging, or cracking of interior or exterior wall coverings. Heavy slates seldom have cut butts. 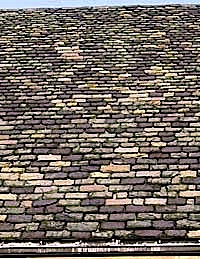 Graduated slate roofs were typically installed on large institutional structures and churches. Slates vary in size, thickness and exposure, with the largest, thickest tiles laid along the eaves, and the smallest, thinnest installed near the ridge.

Salvaged slates are slates which have been re-used, such as in a repair. Because slates from different quarries have different aging characteristics, salvaged slates may weather or fail to change color at the same rate as the rest of the roof.

Special-order slate roofs may use slates that are longer or wider than usual, are of a special color or cut, and/or have special fastening requirements.

Depending on the style of the slates installed, you may see variations that are the result of the manufacturing process.

The typical length for a slate is between 10 inches and 24 inches. The length of the slate determines the amount of exposure.  It also affects the cost in different ways. Shorter lengths mean more slates per square, which increases the labor cost for installation.  Longer slates are more difficult to make, which increases their cost of manufacture.

Random-width slates vary in width, but most will be about two-thirds of the slate's length. A smaller percentage will be of larger widths. If you’re looking at a roof with many joints that don’t align at alternate courses, it’s probably a random-width design. If you’re looking at a roof whose slate butts don’t align in clean, horizontal lines but instead jog up and down at each slate, then you’re looking at a staggered-butt installation. These roofs require slates of two different lengths. The tops of all slates in each course must align for the slates to lie properly. Ragged random slates align along their tops so that the slates all lie in the same plane, but their butts vary randomly, with different lengths, angles and lines. Some may appear to be broken. The same headlap and sidelap limitations apply to all slate installations. 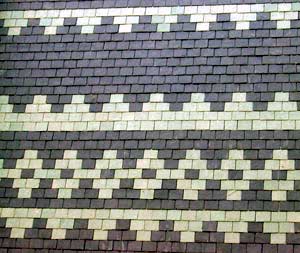 Here, slates of different colors have been installed to form patterns.

All photos are courtesy of Slate Roof Central of Grove City, Pennsylvania.