The weathering of slate tiles is similar to that of other roof-covering materials.  It's the slow process of natural deterioration of materials exposed to the elements.

A slate tile is composed of layers called cleavage planes.  It’s along these planes that slate naturally splits or cleaves. When you look at the face of a slate tile, you’re looking at a cleavage plane.

Weathering in slate is based on two factors:

1. the gradual delamination of the different cleavage planes; and

2. the increasingly porous state of the slate as its minerals dissolve from repeated moisture cycles. 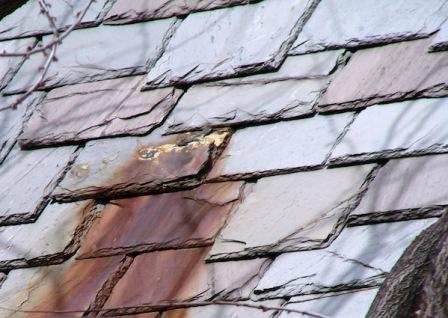 Mineral impurities can cause deterioration in slates. Impurities may be uniform throughout one or more tiles… 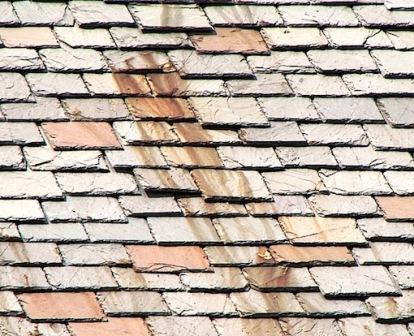 …or may appear in pockets, called mineral occlusions, as you can see here.

Delamination is caused by the reaction of certain minerals to long-term moisture cycles. Over time, these minerals expand, causing layers to separate along cleavage planes. Because slates are most likely to absorb moisture along their edges, that’s where delamination is often most obvious. As slate ages, paper-thin flakes separate from its surface, and its interior becomes increasingly soft and spongy as the inner layers also begin to delaminate.

Slates with mineral occlusions may show deterioration anywhere on the tile.

As layers delaminate, they provide an avenue for moisture to be absorbed into the tile's interior. “Rot” is not an appropriate word to use to describe slate deterioration because rot is caused by decay fungi that don’t affect slate.  But the softening, crumbling effects of slate deteriorated by moisture are similar to wood rot. 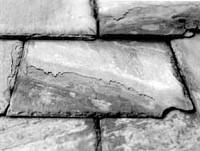 The chemical and physical changes common to aging slate increase its moisture-absorption properties and reduce its strength and toughness. This general weakening leaves slate tile more vulnerable to breakage, cracking and chipping at the corners. The increase of moisture absorption may not actually cause leaks, but it can hold moisture against the wood sheathing and cause wood decay, which can go undetected for a long time.  On homes with older slate, you should check the condition of the roof sheathing.

UV radiation and moisture also cause lime and other mineral salts in slate to break down. This causes slate to become more porous.  These minerals are eventually deposited as white powder on the surface of the slate, and this is called efflorescence. There is some disagreement about the degree to which visible efflorescence indicates failure of slate tiles, but there is general agreement that widespread efflorescence indicates a long-term moisture problem that may be serious.

Factors which typically affect other roofing types -- such as thermal expansion, the freeze-thaw cycle, and UV deterioration -- have a lesser effect on slate tiles. Older slate roofs that have been generally weakened are more affected by these elements than newer ones. Southern exposures are less important to the deterioration of slate roofs than with other types of roofs. More important is the direction from which storms approach because long-term, moisture-related chemical changes deteriorate slate.