SLATE INSPECTION, Part 1
Unless your background has provided you with expertise in slate roofs, you may want to disclaim them and recommend evaluation by a specialist, especially if the slate is not new. This is even more important if you suspect that the slate is at or near the end of its useful life. Failing to recognize that a slate roof will need replacement soon would be a serious disservice to your client and may cause him to file a lawsuit against you based on negligence.

In addition to competency, having the specialized equipment necessary to adequately inspect the roof may be a problem for many inspectors.

Accessing Slate Roofs
Accessing a slate roof for a closer look can require equipment such as a long extension ladder with hooks that fit over the roof peak. Compared to a person walking the roof, a ladder will spread the weight over a larger portion of the roof, reducing the chance of damage.

Slate roofs require maintenance just like all other kinds of roof-covering materials do. Damaged or missing slates should be replaced by a qualified contractor, and “qualified” is the key word here. As slate roofs become increasingly rare, so do the contractors qualified to work on them. Any time you make a recommendation that a roof (or any other part of the home) be evaluated or repaired by a contractor, insert the word “qualified” in front of the word ”contractor."  That way, if your client takes a low bid on work and the contractor makes a mess of it, it will be difficult for the client to include you in a lawsuit because he didn’t follow your recommendation and hire a qualified contractor.

Look for broken slates, including missing corners. As a general rule of thumb, a slate corner is considered to be missing if the broken area exceeds 1x1-inch on the sides of a triangle. Even on a new roof, corners broken less than this are accepted as slates that will not leak or reduce the overall performance of the roof. Broken corners are very noticeable, and you should note them in your report, along with a comment on the degree of threat, if any, that they represent to the roof's integrity.

It’s not unusual for corners to be broken during fabrication. It’s the responsibility of the nail-hole puncher to ensure that nails are punched in a location that will result in broken corners being hidden by the slate in the course above, as well as in a location where they won’t be likely to cause leakage.

Here are some other inspection concerns and common reasons for broken slates:

Snow Guards
Another problem is when a snow guard is hooked over the top of a slate instead of nailed to the roof framing. Heavy snow loads can pull the slate loose, or loosen overlying slates.

Snow sliding off the roof can be dangerous.  Poorly installed avalanche preventers -- also called snow-retention devices and snow guards -- can cause damage.

Look for these typical problems:

You may see pipes installed as snow guards. 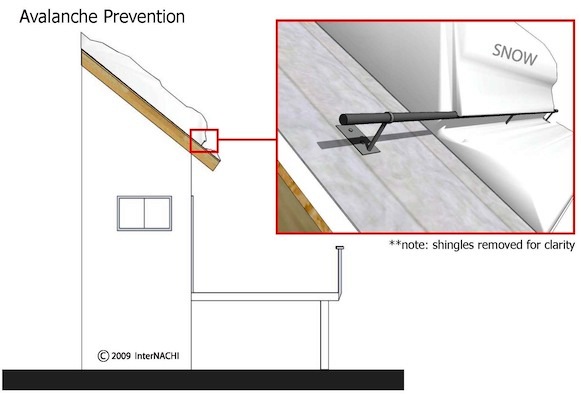 When this is the case, pay attention to how they’re attached to the roof. The preferred method is a bracket that replaces an entire slate. 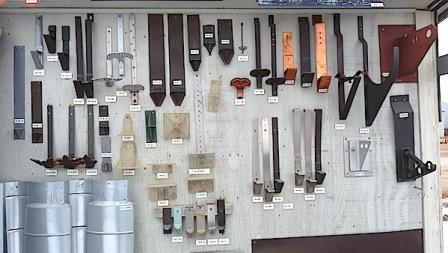 A wide variety of snow guards is available, as you can see here. Important in evaluating snow guards is being able to determine if they are spaced properly. This will exceed the scope of your inspection.

You may find gutters built into the roof. Because slate is fragile, these gutters are often walked in, or used to support a ladder, or hold tools. Also, because they’re hidden, maintenance is often neglected. Do your best to get a look at these gutters.

During the early 1900s, downspouts for these built-in gutters were sometimes routed to home plumbing. If you find leaks in older homes whose roofs appear to be in good condition, check to see if the gutters are still connected to the home's plumbing waste pipes.

Whether slate can be cleaned depends on the source of the stain. Here are some common sources and their remedies:

Design problems affecting slate roofs are generally the same as those for other roof-covering materials. Steeply pitched roofs extend the lifespan of the slate by shedding runoff more quickly. Runoff should have a clear path to the roof’s edge.

Attic and rafter bay ventilation can be issues with slate. Temperatures and relative humidity should be equal on both sides of the slate. If moisture originating inside the home is not adequately vented to the exterior, it may cause chemical reactions in the underside of the slate tile that accelerate deterioration. This can appear as efflorescence (a white, powdery deposit) on the underside of the tile.