While Styrofoam™ may be most commonly associated with meat trays and disposable coffee cups, the material is considered by many to be a residential building material.

Communities composed entirely of Styrofoam™ are already a reality in progressively minded Japan. These structures have been approved by Japan’s Land and 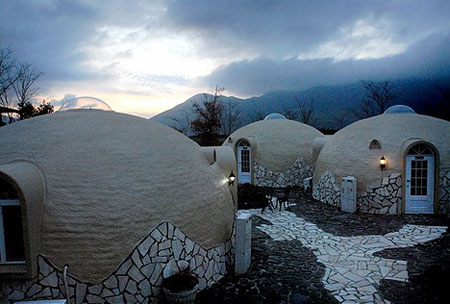 Transport Ministry, and, with the proper permit, they can be erected anywhere in that country, where they are known as “dome homes.”
Prefab home manufacturers use the material to construct easy-to-assemble, igloo-shaped modular kit homes. The Aso Farm Land resort village in Kyushu is one notable instance, where 480 Styrofoam™ domes serve as lodging, recreational facilities and retail shops. They are built from 7-inch thick, snap-together wall sections made from a type of Styrofoam™ that is considerably stronger than ordinary packing foam. Dome house kits start at around $30,000, and this price does not include the cost of transport or assembly.
Manufacturers of dome homes boast the following advantages over homes built with wood or metal:
Even in the United States, where dome homes are still the stuff of hobbits and smurfs, Styrofoam™ homes have passed uniform building code standards, and they represent a growing niche market. In Hawaii, for instance, entire conventional multi-story homes – not Japanese-style dome homes – are being constructed from Styrofoam™. The ceiling, stairs, walls, support beams and roof of such a home are constructed with cement-coated Styrofoam™ and lack straps, tie-downs, nuts and bolts. Even the gutters are cut into the foam, and everything conforms to the building code. According to the manufacturer, these homes are cooler than homes made from conventional building materials, and they cost 10% less to construct.

Another growing market in the United States is homes that are built from a concrete-foam hybrid. The result is a synergy of the insulative capability of Styrofoam™ and the strength of a standard building material. The foam provides continuous insulation, as opposed to traditional insulation that has a break at every wood stud. The technique is about 3% to 5% more expensive for new-home construction.

In summary, Styrofoam™ is emerging as a promising building material for residences.