Surge protectors, also known as surge suppressors or transient-voltage surge suppressors, are devices designed to limit the voltage supplied to an electrical device by shorting to ground any excess voltage above a safe threshold. 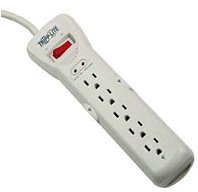 These electrical devices may be installed in residential and commercial power distribution panels, process control systems, and communications systems. Most commonly, they appear in the form of power strips and whole-house surge protectors.
Surge suppressors come in all kinds of configurations, shapes and sizes to accommodate the smallest electrical device up to the largest and most complicated, high-voltage equipment.  There may be no apparent difference in appearance between a power strip that merely acts as an extension cord and a power strip that contains the extra protection of a built-in surge suppressor.  For this reason, consumers should be aware of what they're buying to make sure the device they purchase is suitable for their intended use.
Power surges, also known as transient voltages, are prolonged rises in voltage significantly above the designated level in the flow of electricity.  These differ from power spikes, which are power escalations of shorter duration. These phenomena will cause wires to heat up like the filament in an incandescent light bulb, with the result that the surrounding elements may melt or burn. In this way, power surges and spikes can cause gradual or sudden damage to sensitive components within electronic equipment, including computers and audiovisual equipment.

Surges and spikes happen for the following reasons: 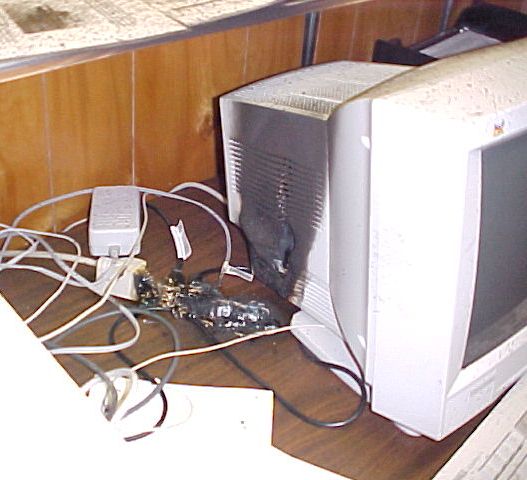 Surge suppression is typically provided by one or more metal-oxide varistors (MOVs), which are two-terminal semiconductors whose function is similar to pressure-s 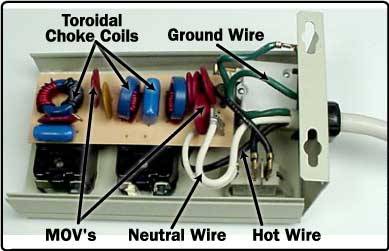 ensitive valves, by conducting electricity only when the power level reaches a threshold beyond safe fluctuations. The excess voltage is re-routed to the ground wire, safely dissipating the voltage into the earth. As the MOV only diverts the surge current while leaving the normal current to flow into the appliance, the operation of surge-protected electrical devices should not be interrupted during power spikes or surges. This same principle is employed using gas-discharge arrestors (GDAs), which use an inert gas that ionizes and becomes an effective conductor only at unsafe voltages. Surge suppression may be achieved through the use of either of these designs, which may be accompanied by backup fuses that burn out and close the circuit when excess voltage is not stopped by the surge suppressor.

Inspectors and homeowners may note a few warnings concerning MOVs and GDAs: 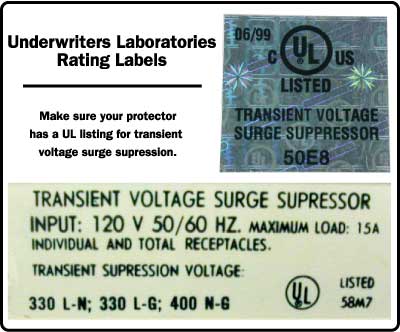 transient-voltage surge suppressor. These units have met the criteria for Underwriters Laboratories (UL) 1449, the UL's minimum performance standard for surge suppressors. InterNACHI inspectors should be aware of the common misconception that surge suppressors and power strips are the same thing, as many power strips have no ability to protect against power surges. A power strip that's designed merely for use as an extension cord and which bears a sticker that labels it as a “relocatable power tap” should not be relied upon for protection during power surges.

Due to the electrical sensitivity and expense of computers, it is strongly advised that they are connected to a UL-listed surge protector, which contains the following metrics:

In summary, surge protectors are small devices used to prevent dangerous fluctuations of electricity from damaging sensitive and costly appliances and electronics.  Consumers should be aware that power strips do not necessarily offer this protection, and inspectors can help consumers understand the difference between these devices, as well as their proper use.