When quantifying the energy efficiency of a window assembly, the rate of loss of non-solar heat can be expressed as its U-factor (or U-value).  Understanding the U-factors of windows is helpful for inspectors performing energy audits, as well as for consumers planning a new build or updating a house with energy-efficient windows.
U-Factor or R-Value?
While windows are rated using both U-factors and R-values, the U-factor is used to express the insulative value specifically of windows, while the R-value is used primarily to rate the energy efficiency of insulation installed in other areas of the building envelope, such as beneath the roof, in the attic, behind the walls, and beneath the floors.  In order to translate a window's U-factor into its R-value, divide 1 by the U-factor.  For example, a window with a U-factor of 0.25 is calculated as 1 ÷ 0.25 = 4, so the same window has an R-value of 4.
What is the U-Factor?
The U-factor rating system was devised by the National Fenestration Rating 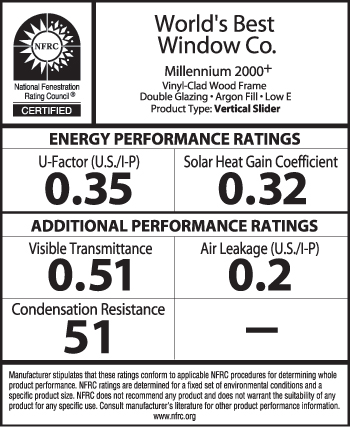 Council (NFRC).  The NFRC is a non-profit group that administers a uniform, independent rating and labeling system for the energy efficiency of building components, including windows, doors, skylights and attachment products.  The U.S. Department of Energy and the Environmental Protection Agency’s Energy Star Program take the U-factor into account when evaluating the energy efficiency of windows for product certifications, and federal incentive and rebate programs.
Windows that have the best resistance to heat flow and, thus, the best insulating qualities, have a low U-factor.  Less efficient windows with poor insulating ability have a high U-factor.  The combination of a window’s U-factor, air leakage, sunlight transmittance, and solar heat-gain coefficient add up to determine its level of energy efficiency.

The temperature difference between the interior and exterior of a building creates the non-solar heat flow that results in windows losing heat to the outside during the winter, and gaining heat from outside during the summer.  Compensating for this by cranking the thermostat or turning up the AC results in added energy needs and higher bills.  Greater energy efficiency calls for a closer examination of the individual building components to see how they can work individually and in relation to each other in more effective ways.  U-factor ratings can help in formulating standardized comparisons and objective evaluations.

The best, high-performance, double-pane windows may have a U-factor of 0.30 or lower, indicating that they are very energy-efficient.  Some triple-pane windows may have a U-factor as low as 0.15.  Manufacturers have started to incorporate low-emittance coatings and gas fills between panes in attempts to further decrease U-factors and provide an even more energy-efficient product.

Understanding the function and rating criteria for U-factors is a helpful tool for inspectors who perform energy audits.  They can then pass this information along to their clients who may have questions about their windows and their home's overall energy efficiency.