Buried storage tanks that contain petroleum and other hazardous chemicals may pose a safety hazard to those living in homes nearby and significant financial liability to the owner. 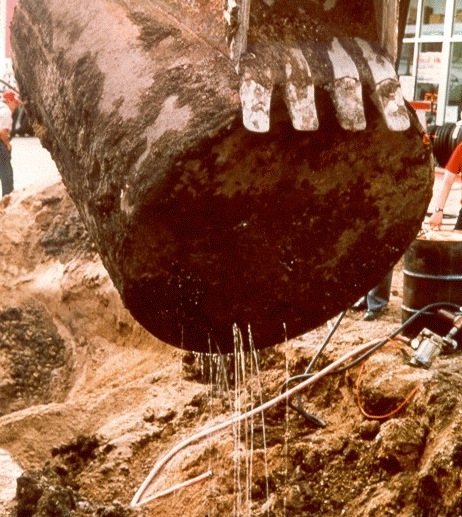 According to the Groundwater Protection Council, there are currently more than 640,000 federally regulated buried tanks that store fuels and other hazardous substances. Of these, about 465,000 have leaked, and most have required cleanup, although tens of thousands were never cleaned because a responsible party could not be identified. Actual figures are likely far greater than these totals, which represent only the documented cases. At particular risk are households that use groundwater, which comprise a large part of the total U.S. population, and 99% of families in rural areas.

Once free from the tank, petroleum will sink through unsaturated soil and enter the water table. There, much of the chemical will vaporize and eventually bubble up through the ground's surface. In addition to the risks posed by other petroleum products, leaked gasoline presents the risk of fire and explosion, especially if the fumes collect in buildings. Any petroleum-contaminated water that is ingested or used to bathe is potentially deadly. Tanks are capable of leaking chemicals for many years, since the corrosion process is typically slow.

Benzene, toluene, ethylbenzene and xylenes, collectively known as the BTEX compounds, are the most hazardous chemicals found in petroleum. Benzene-contaminated water has been proven to cause cancer, as does water contaminated by methyl tertiary butyl ether, which is added to gasoline to make it burn cleaner. The latter chemical has infiltrated 9,000 community water wells in 31 states, although its use in gasoline is being phased out.

The liability connected with leaking buried tanks can be huge for the property owner.  Testing typically costs around $500, which is considerably less expensive than the amount of money required to clean up a subterranean oil spill and install a new tank. The test should show that there is no leakage.  If there has been a leak, the situation should be remedied before the property is purchased. Testing requires one or more of the following technical measures:

Tanks that show leakage must be removed from the ground or filled with a chemically inert solid, such as sand. Groundwater contaminants too must be removed by pumping air through the water, which causes volatile petroleum compounds to vaporize and biodegrade naturally. The process of treating or removing the tank, water and soil, known as remediation, costs thousands of dollars and is not guaranteed to succeed. Many communities have been forced to find alternative sources of drinking water because of petroleum contamination. To avoid this costly and difficult mess, new installations should be buried far from potable water sources and properly maintained, once the system is in service.