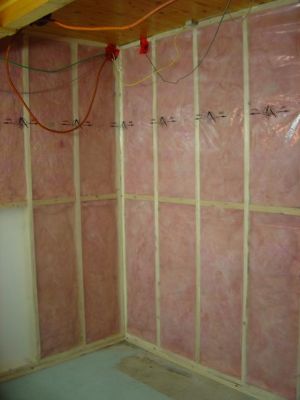 Vapor barriers are an important part of moisture control for interiors.  A vapor barrier is a material, typically a plastic or foil sheet, which resists the diffusion of moisture through ceiling, wall and floor assemblies of a building. Vapor-diffusion retarders are also effective for controlling moisture in basements, crawlspaces, and slab-on-grade foundations.

The term “vapor barrier” is commonly used, but “vapor-diffusion retarder” is probably more accurate, since "barrier" implies that the material will stop all moisture transfer, but this is not actually the case. Any material will allow the passage of at least a small degree of water vapor.

The capability of a given material to resist the diffusion of water vapor is measured by units called "perms," which quantify its permeability.  A perm at 73.4° F (23° C) is a measure of the number of grains of water vapor passing through a square foot of material per hour at a differential vapor pressure equal to 1 inch of mercury (1-inch water column or WC).  Any material with a perm rating of less than 1 is considered a vapor retarder.

Depending on the climate, vapor-diffusion retarders are used and installed in different ways.  The number of "heating degree days" (or HDDs) for a given area is used to determine its appropriate application.  A "heating degree day" is a unit that measures how often daily, outdoor dry-bulb temperatures fall below an assumed base, normally 65° F (18° C).

Pros and Cons of Different Materials

Treated paper or foil used as a vapor retarder typically comes in the form of kraft or foil-faced batt insulation.  It is useful in situations where the wall finish has been removed and new exterior wall insulation is being installed, as well as in new builds.  This type is most effective in mixed climates with low humidity, since the amount of unsealed edge will allow a path for moisture-vapor migration.

Clear polyethylene is the most basic, plastic barrier film available, as well as the most economical, and is best suited to interior wall applications over framing and insulation.  It is also an environmentally friendly choice since it is comprised of up to 80% re-processed material, but this comes at a cost, as the quality can be uneven, making it prone to tearing and puncturing.  This type of vapor-retardant material is not recommended for applications where it will be subjected to more than a limited amount of direct sunlight, as it will degrade over time. 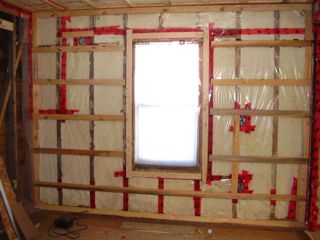 Photo at right courtesy of www.My-Green-Home-Project.com
Black polyethylene solves the issue of degradation from sunlight exposure by adding carbon as an ultraviolet inhibitor.  It is otherwise   functionally identical to clear polyethylene.

Cross-laminated and fiber-reinforced polyethylene are specialty products for applications where higher strength may be required.  For retrofitting over rough, irregular surfaces, such as solid-board sheathing, these products are less susceptible to tears and punctures by lifted nail heads, splinters, and exposed, sharp corner edges.  Either product would also be appropriate where rough handling and adverse site conditions are expected.

Vapor-diffusion retarders are in widespread use in many geographical regions.  Inspectors will benefit from knowing how they are utilized most effectively in different areas and under different conditions.  Knowledge of the advantages and disadvantages inherent in the various materials can be helpful in determining which one will be right for a specific application, weather it is for a new build or a retrofit.