Water stoves, also known as outdoor wood-burning stoves and outdoor wood boilers (OWBs), are freestanding heating units used to heat homes and domestic hot water, hot tubs, swimming pools and greenhouses. Situated outside the building envelope, they typically consist of a water reservoir and firebox, appearing together like a small tool shed with a smokestack. Air is heated in the firebox and passed through channels in the water reservoir, which is heated and pumped underground through insulated pipes to the house. A thermostat that monitors the temperature of the water in the reservoir controls the furnace draft. 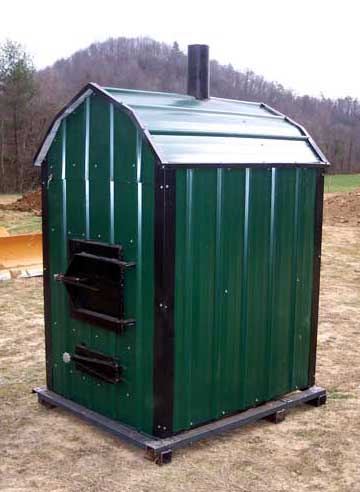 Homeowners will see safety and health advantages to installing a water stove; by moving the heating system outside, house fires become less likely, and occupants are not subjected to the influx of smoke from the fireplace, or potentially lethal carbon monoxide from the boiler. Furniture will smell better, too, and more valuable space will be freed up inside the house. As an added bonus, water stoves can typically be fed larger pieces of firewood than can be burned by an ordinary fireplace or woodstove, which reduces the time required to prepare the wood.

However, water stoves don’t escape the inherent drawback of wood fuel for heating; wood smoke is hazardous because it contains a mixture of at least 100 different gasses and fine particulate matter. Nearly all of the pollutants that the EPA cautions against, including ozone, carbon monoxide, nitrous oxides, particulate matter, and sulfur dioxide, are components of wood smoke. This smoke can easily make its way around closed doors and windows and into the homes of neighbors. There have even been reports of indoor smoke alarms being activated by smoke from water stoves, partly because they release smoke at low heights relative to a typical house chimney, so that it has difficulty dispersing. For these reasons, water stoves should be used only in rural areas far from neighboring residences. Homeowners who have questions about air quality should consult with an IAC2-certified InterNACHI inspector.

To make matters worse, water stoves, by design, are terrible polluters, making them even more of a public health threat. They encourage a slow, cool fire, in contrast to a woodstove or even a traditional fireplace.  This maximizes the amount of heat transferred to the water, but also minimizes the efficiency of the burn. This “damping” of the fire, while an efficient technique to heat water, produces additional harmful chemicals and smoke, which is oxygen-starved and low-temperature due to incomplete combustion. Water stoves, unlike many indoor woodstoves, are rarely equipped with refractory tunnels where high-temperature, secondary combustion can take place. And, according to the Vermont Department of Environmental Conservation, water stoves are often falsely advertised as efficient heaters. In fact, they rarely have a thermal efficiency of 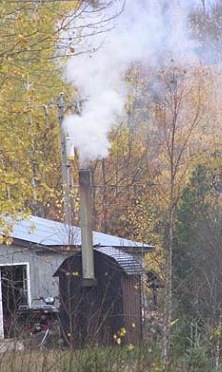 more than 50%, while woodstoves generally are in the 63%-to-72% range, meaning that extra wood is required to produce usable heat.
As a result, many jurisdictions have banned or restricted the use of outdoor wood-burning stoves. The Wisconsin Department of Health Services, for instance, offers the following guidelines for OWBs:

Due to their placement and venting outside of the home – and their ability to accept fuel larger than that typically used for an indoor fireplace – water stoves are commonly used to illegally burn items other than natural wood. Irresponsible homeowners have been reported for burning OSB, pressure-treated wood, trash, and various other toxic materials in their water stoves, exposing whole neighborhoods to irritants and carcinogens.

In summary, water stoves offer some advantages over indoor heating options, but they are a public health threat when not installed and operated in a responsible manner.