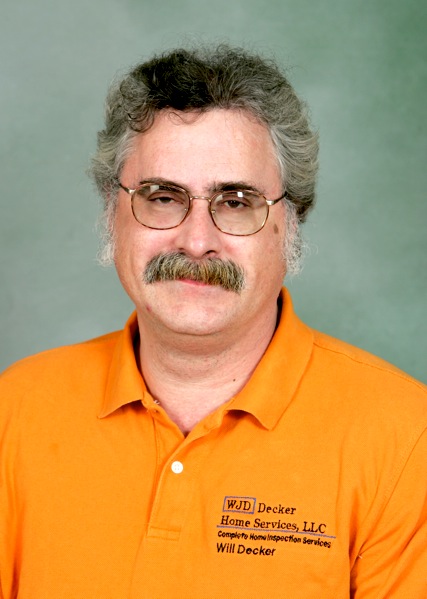 William Decker is a Certified Master Inspector®.  A former physicist and medical thermographer, Will became a home inspector in 2005.  Using his physics and computer science background, he is now a nationally recognized expert on water intrusion construction issues.  He came to prominence in 2007 when he became aware of the special water intrusion problems occurring in the Chicagoland area with single-family houses and multiple-unit condominiums constructed with split-faced CMU block.
Will is one of the founders of the InterNACHI Chicagoland Chapter (the first chartered and legally incorporated InterNACHI Chapter), and has served as the Chapter President and Vice-President.  He is currently the chapter Education Director. Will was awarded the InterNACHI Golden Pen Award for excellence in home inspector education, and was InterNACHI’s 2006 Member of the Year.

“Specialization is for insects” – these words from Will Decker’s father have guided Will throughout his life. While he is now a successful home inspector and member of InterNACHI, Will previously worked in the fields of food service, security, software development, live music, information systems, and nuclear physics. He was, at different points in his life, a security guard, a health physicist, a medical thermographer, a nuclear medicine technologist, a roadie, a health physicist, and an assistant radiation safety officer at the first commercial nuclear power plant in the United States. He ran a cyclotron and helped design one of the earliest GPS devices. He holds a master’s degree in computer science and another in physics.

After working in the fields of physics for 10 years and information systems for 17 years, Will decided he needed a change. With no prior experience as a professional tradesman (although he had worked in construction in high school, and rehabbed some of the rental buildings he and his wife owned), he made the career shift to home inspection in his mid-50s. Bored by the monotony of office life, he now enjoys being his own boss and the endless variety of clients and homes. In a mere five years in the inspection business, Will has managed to accomplish a great deal:  he teamed up with colleague John McKenna to write a course on thermal imaging for InterNACHI members, and is currently creating a more detailed, technically-oriented version of that course. He helped organize inspectors in Illinois and provide them with much-needed state-mandated Continuing Education courses so they can be certified by the state. Just six miles from ASHI’s headquarters, Will manages to compete with well-established chapters and offer instruction that, in his opinion, is far more informative and inexpensive than anything else on the market.
Will feels his previous experiences have served him well as a home inspector. A crack in a building’s exterior must be evaluated in a systematic, process-oriented manner that is not dissimilar from the ways that problems with nuclear components or computer programming should be approached. As a computer scientist, he saved money by designing his own inspection website, and he is obviously comfortable with technology and the methodology of business accounting. Inspection reports, too, are not wholly different or more challenging than the detailed and thorough technical writing he has previously composed.


Will believes that, above all, it is important for home inspectors to be professional. To him, this means that their primary goal should be to serve their clients, not themselves. “Anything I put out, I get back,” he says, while reflecting on the amount of work he has gained through honest and generous business practices. He also allows people who are new to the business to ride along with him and observe real inspections for free. He maintains close ties with other Chicago-area inspectors, whom he views as colleagues, rather than competitors. Will’s experiences show how hard work and professionalism can guide you to success, no matter what you’re doing.