Wind blows faster in open areas where there’s nothing to slow it down. The 2006 IRC (International Residential Code) lists four Wind Exposure Categories, labeled A, B, C and D, according to the degree of obstruction offered by the topography.

An example of Exposure A is an urban environment in which 50% or more of the buildings are taller than 70 feet.

The B Exposure is an urban or suburban environment with closely spaced homes or home-size buildings.

Exposure D is flat, unobstructed areas, such as shorelines.

Height Above the Ground

Wind slows due to friction with obstructions. Because air is a fluid, obstructions near the ground can affect wind speed at a much greater height. Aerodynamic drag created by buildings taller than 30 feet can actually slow down air that is flowing at an altitude of 1,500 feet. This is because air moves by convection, so flowing air will have an effect on the air surrounding it. 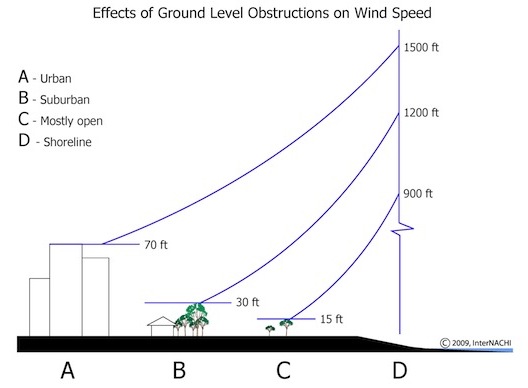 Since wind speeds are higher farther above the ground, taller buildings are exposed to higher wind speeds and will be more likely to suffer damage. 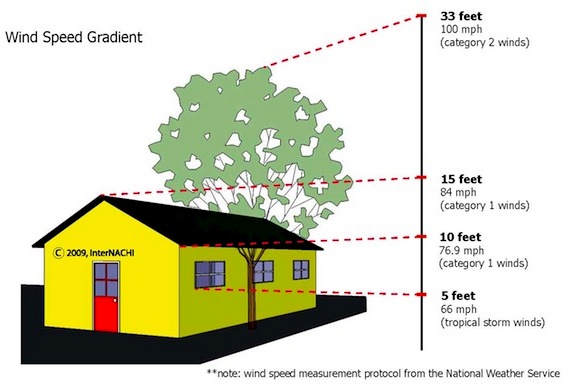 Wind speeds reported by the National Weather Service are typically measured at a point 33 feet above the ground. This illustration shows how drastically wind speed can be reduced below 30 feet.

Hurricane wind speed is measured as one-minute sustained winds, and may be measured at a much greater altitude by aircraft.

In Part 3, we’ll examine how the forces created by wind actually damage roofs.