Wood shakes and shingles are made primarily from western red cedar.  They are available in a variety of types and grades, and categorized according to their level of resistance to wind, impact and fire.

Standards for wood shake and shingle manufacturing and application are provided by a number of standard and code-producing organizations, including:

For shake and shingle grading rules, the IRC generally defers to the CSSB.
Performance Standards

Shakes and shingles must undergo and meet the following types of testing and performance standards.  However, you won’t be able to confirm visually that the wood roof you’re inspecting has qualified for any of these ratings unless documentation is provided.

Shakes and shingles may be UL-certified to resist winds of up to 245 mph and 173 mph, respectively.

Shakes and shingles are available in Class 3 and 4 impact ratings, with Class 4 being the most resistant to impact damage.

Shakes and shingles are available in Class A, B or C fire rating, but you can’t just go out and buy a Class A-rated shingle or shake. Achieving a Class A rating requires that a Class B fire retardant-treated shake or shingle be installed above a heavy asphalt cap sheet. This is called a component system.  It requires more than one component to achieve the Class A fire rating.

Achieving the desired fire rating also requires adhering to the recommendations of the company that treated the shakes or shingles. These requirements may vary among treatment companies.  Failure to adhere to specific recommendations may void the warranty. You won’t be able to identify the fire rating of a shake or shingle just by looking at it. Again, documentation would have to be provided in order for you to provide confirmation of a sellers claim that a roof is rated Class A.

CCA pressure-treated shakes and shingles are available that resist decay in humid climates. You won’t be able to tell by looking at them whether wood roofs have been treated with a fire-retardant or preservative.

Shakes are heavier, thicker and sometimes longer than wood shingles.

Taper-split shakes have a split face and split back, and are tapered from butt to tip.

Straight-split shakes have a split face and split back, and are not tapered.

Hand-split shakes have a split face, a sawn back, and are tapered.

Medium and heavy shakes are available.  The medium is typically thinner than ¾-inch, and the heavy is thicker. Shakes are available in 18-inch and 24-inch lengths, and longer for applications at historical properties.

Shingles are always tapered, always sawn, and are thinner than shakes. They’re available in 16-inch, 18-inch and 24-inch lengths.

Sidewall shingles are made for installation on exterior walls.  They may have one of many types of pre-finish or finish coatings different from the shingles used on roofs.

Shingles come in three basic grain exposures:  edge grain, flat grain and slash grain. The quality can be judged by the appearance of the grain. 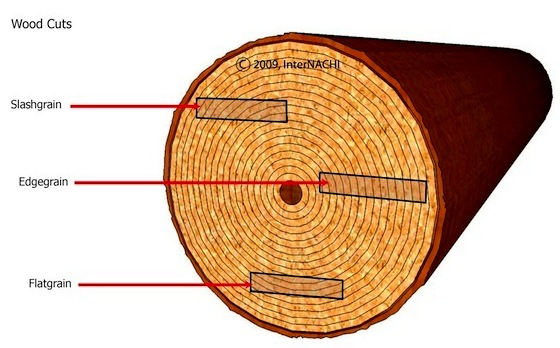 Edge grain and flat grain are the most common types of shingles, although it’s not unusual to find some flat-grain shingles on a roof that has mostly edge grain.

Edge-grain shakes and shingles have tight, straight grain and are the most stable. 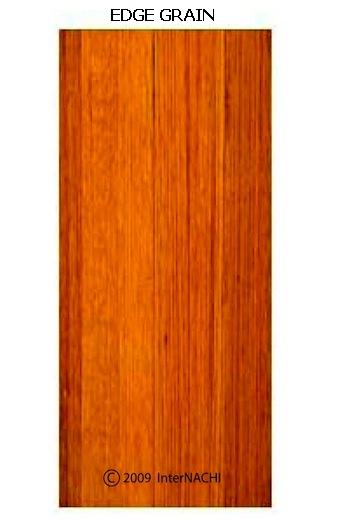 Edge-grain shakes and shingles are cut perpendicular to the growth rings. 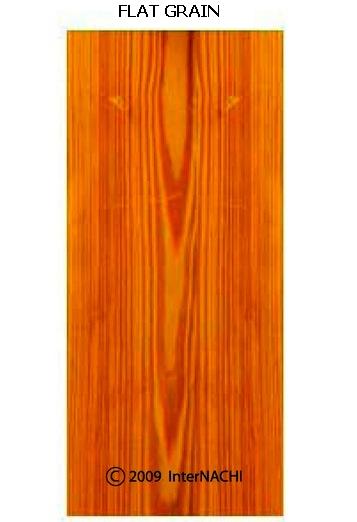 Flat-grain shakes and shingles are cut parallel to growth rings, with the grain oriented horizontally when viewed from the butt-end. The face of the shingles shows very wide grain with a fairly obvious centerline, as you can see here.

Because this type of shingle exposes the most sapwood to weather, it’s the least stable and most likely to check, split, erode and distort.

Flat-grain shakes and shingles are likely to split along the centerline during natural weathering. 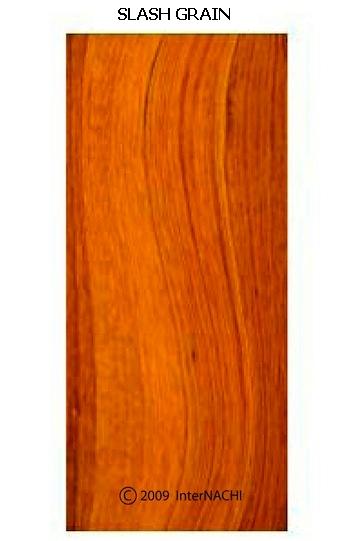 Slash-grain shakes and shingles are also cut perpendicular to the growth rings but at an angle of more than 45° from vertical when viewed from the butt. Grain on the face of the shingle may appear wavy. Because the angle of the cut exposes more sapwood than edge-grain shingles do, slash-grain shingles are the least stable of the three types and are more prone to checking, splitting, erosion and distortion.