The speed at which wood shakes and shingles weather depends on a home’s: 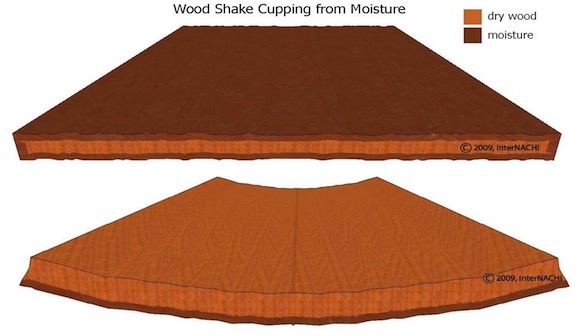 Cupping is caused by uneven moisture absorption and drying.  As wood absorbs moisture, water fills the spaces between wood cells, causing the wood to swell. As wood dries, water leaves the spaces and the wood shrinks. The undersides of shakes and shingles often dry more slowly than the exposed faces. The exposed faces will shrink as they dry, but the undersides will remain in an expanded condition, since they’re still full of water. 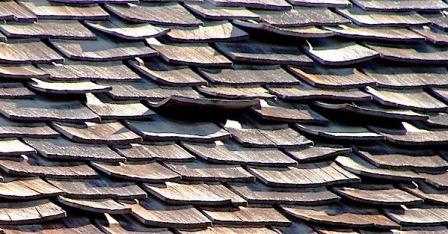 Curling is caused by natural stresses in the wood that are released when the shake or shingle is cut and are made worse by moisture cycling. Flat-grain shakes and shingles are more likely to distort than edge-grain and slash-grain. 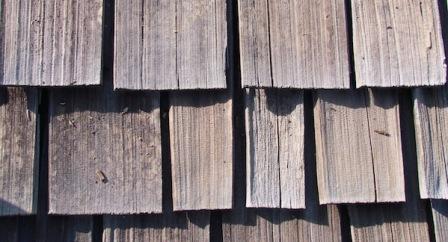 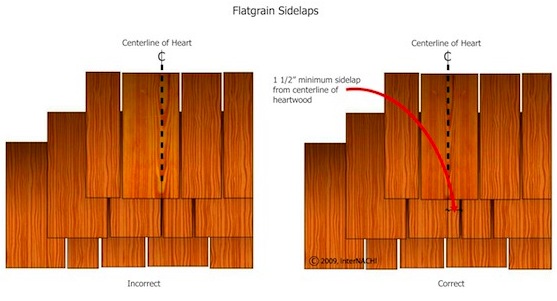 All grades and types of cedar shakes and shingles will crack and split naturally as they weather over time. Flat-grain shakes and shingles are more likely to split than edge-grain, especially along the center of the heartwood, which is why vertical joints should not align with the centerline of heartwood, but should be offset a minimum of 1½ inches.

Newer splits from impact, such as hailstrikes or tree branches, or from footfall or mechanical damage, have sharp edges, and the interior of the split is typically orange. Over several months, the wood will turn grey from exposure to UV radiation and, to a lesser extent, oxidation. 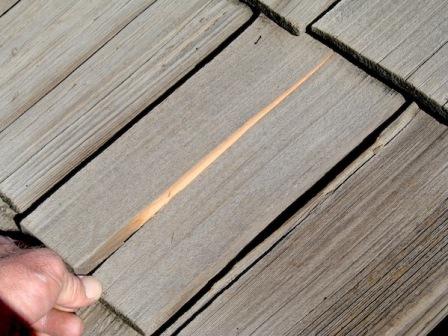 The photo above shows a fresh split from footfall. You can see that it’s orange and runs the length of the shake. The grey color and rounded edges near the butt indicate that the shake was already weakened by a partial split when it was stepped on. 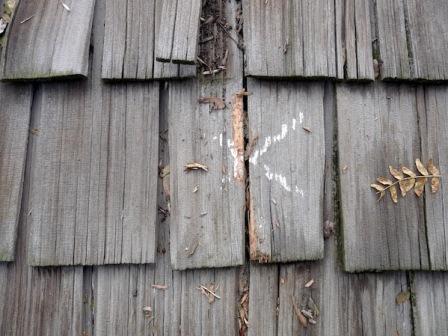 The photo above shows damage from a low-angle hailstrike. 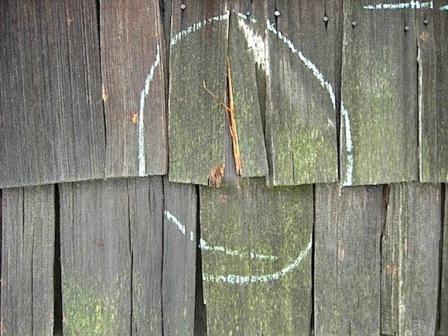 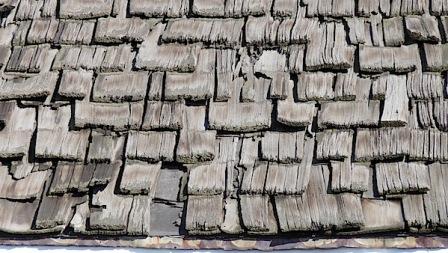 The photo above shows a shake roof at the end of its useful life. Widespread splitting has reduced sidelaps to less than 1½ inches over a large part of the roof.

Generally, after 10 years’ exposure to weather, one-third of edge-grain and two-thirds of flat-grain shakes and shingles will have splits.

Splits are more difficult to see when wood is wet because, as wood absorbs moisture, it swells, which tends to close splits. For this reason, and because wet wood roofs are slippery and dangerous to walk, they should be inspected when they’re dry.

All shakes and shingles will eventually split. Splitting is part of the natural aging process.

Splits may start at fasteners. If more than two fasteners are installed, shakes and shingles may not be able to swell and shrink freely and may split as a result.

Splits caused by hail have an indentation along the split. If the shake or shingle was cupped at the time of impact, the impact may be to one side of the split, but this condition is relatively rare.

Splits caused by the weight of a person walking have no hail indentation and the split may be roughly uniform in width, as opposed to splits caused by weathering that are wider at the shingle butt, since weathering splits start at the butt.

If splits align with vertical joints or other splits in the course below, runoff will have an avenue to penetrate the roof.

If splits are wide enough to expose the felt interlayment to sunlight, UV radiation will deteriorate the felt, eventually allowing moisture to penetrate deeper into the roofing system. 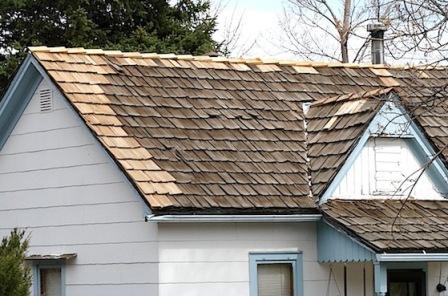 Here, you can see the color difference between new and existing shakes. The new shakes will fade to match the existing shakes (typically, in less than a year), although home site conditions will affect that timeframe somewhat.

Prevailing winds at this home site blew toward the rake-end of this home. You can see that the shakes along the rake have been replaced, and so have the ridge cap shingles. New cap shingles have been overlapped correctly. This orientation reduces the chance of cap shingles being lifted by wind.