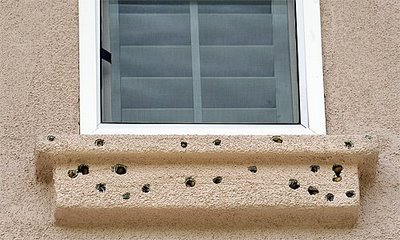 to homes nationwide, the states of Michigan, Louisiana and Wisconsin have estimated the cost of repair to their residences to be in the hundreds of thousands of dollars annually. One survey of woodpecker damage to homes reported an average loss of $300 per incident. Such destruction is rare in urban areas, but it can be extensive in suburban and wooded areas, even where woodpeckers seem to have plenty of natural alternatives to houses. InterNACHI inspectors can assist their clients with some tips to locate and address damage, as well as discourage these sometimes troublesome birds.

Woodpeckers are a subfamily of Picidae birds, known for their long, sticky tongues, which they use for extracting food, and their strong bills, which they use for drilling and drumming on trees. Twenty-one species are found in the United States and many others are found worldwide, with the exception of Australasia and Oceania. Woodpeckers are generally 7 to 15 inches (17 to 40 cm) long, have short legs, sharp-clawed toes and stiff tails. Most woodpeckers feed on wood-boring insects, insects on trees and the ground, vegetable matter, wild berries and tree sap.

Much of the damage inflicted to structures is caused specifically by the Northern Flicker (Colaptes auratus), 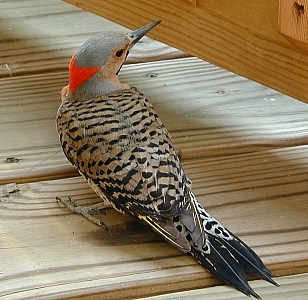 which can be identified in flight by a yellow or salmon tint under the wings and tail feathers, and a black or red mustache extending from the gape of the beak to below the eyes. The hairy woodpecker (Picoides villosus) and the downy woodpecker (Picoides pubescens) can also be destructive.

Woodpecker damage, in addition to being problematic in itself, also encourages infestation of insects and other wildlife by providing an entry point into the structure.  These same avenues allow rainwater to invade the structure, which can lead to mold growth and other damaging and hazardous conditions.

Wood is not the only building material at risk of attack by woodpeckers. The birds may even pierce plumbing and electrical lines behind a house’s siding. In addition to homes, inspectors and homeowners should be on the lookout for serious woodpecker damage to barns and other outbuildings that are not consistently inhabited or monitored, as well as summer and vacation homes that are vacant for part of the year.

Woodpecker attacks can be categorized into the following general types:

Fortunately, woodpecker damage can be mitigated through exclusion methods. These methods should be implemented as soon as the bird becomes a pest, as woodpecker behavior patterns are difficult to break once they’ve been allowed to establish.

Inspectors can pass along the following exclusion tips to their clients:

Do Not Try This at Home

Homeowners should avoid the following common yet ineffective or even illegal woodpecker exclusion practices:

In summary, woodpecker damage to houses in certain areas is common and inconvenient, but InterNACHI inspectors whose clients complain of problems from these birds can advise them of the benefits of using appropriate building materials, as well as effective (and legal) techniques to discourage pesky woodpeckers from causing future damage.