by Nick Gromicko, CMI®
Ants are among the most prevalent pests in households, restaurants, hospitals, offices, warehouses, and virtually all buildings where food and water can be found. While mostly harmless to humans, ants (especially carpenter ants) can cause considerable building damage. 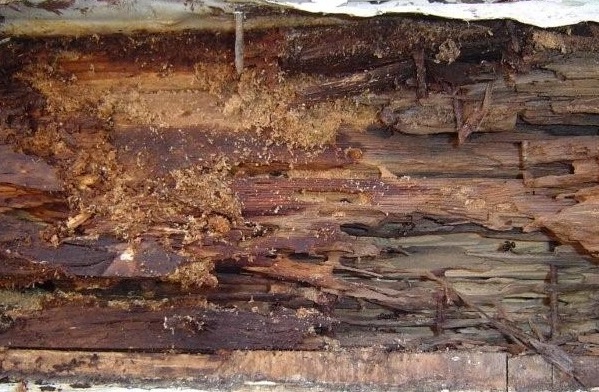 Inspectors can expand their knowledge base by being able to identify some of the telltale signs of ant infestation.
Ant Behavior
Ants are social insects that live in colonies divided into three castes: queens, males and workers. Most of the ants you may observe, which are responsible for gathering food, are sterile female workers. Winged males and females will leave the nest to mate, and to find suitable locations for new colonies. After mating, the males die and the impregnated females (queens) shed their wings and lay eggs that will hatch into the legless, grub-like larvae. The queen takes care of these larvae as they develop until they finally become pupae. Within a few weeks, adult worker ants emerge from these pupae and take over the job of tending the young.

Winged ants are often mistaken for winged termites, which also leave their nests to mate. These insects can be distinguished from one another by three main characteristics:

Termites and ants both construct nests in moist wood, but ant nests are typically smoother and lack mud structures commonly found in termite nests. Also, termites actually subsist on wood, so the structural damage they leave it their wake is generally more severe than that caused by ants, which merely tunnel through wood.

Carpenter ants nest in both moist and dry wood, but they prefer moist wood. Accordingly, nests are more likely to be found in wood dampened by water leaks, such as wood around bathtubs and sinks, poorly sealed windows and door frames, roof leaks and poorly flashed chimneys. Nests are especially common in moist, hollow spaces, such as the wall void behind a dishwasher and in a hollow deck column. As there will often be no external signs of damage, probing the wood with a screwdriver helps reveal the excavated "galleries." Another technique for locating hidden nests is to tap along baseboards and other wood surfaces with the blunt end of a screwdriver while listening for the hollow sound of tunneled wood. If a nest is nearby, carpenter ants often will respond by making a rustling sound within the nest.

The following clues are evidence that a building is host to an ant infestation:

Exclusion Practice
A number of steps can be taken by homeowners to reduce the potential for future ant problems, such as:
In summary, ants are complex creatures that create structural defects in buildings. Inspection and exclusion techniques should be practiced.