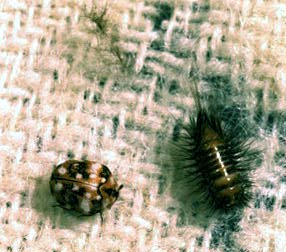 Female carpet beetles will lay 50 to 100 small, pearly-white eggs on protected surfaces near a food source, such as the lint around baseboards, in the ductwork of hot-air furnace systems, and on wool clothing in storage. Larvae emerge once the eggs hatch after six to 11 days in warm weather, although they may require more time in cool weather. The larval life spans between 250 to 650 days, most of it spent scavenging for protein-rich food in dimly lit areas. By the time they reach adulthood, carpet beetles will live for only another few weeks or months, and they will no longer damage household goods. Unlike larvae, adults are attracted to light and can be found busily flying around windows or feeding on pollen outdoors.

Types of Carpet Beetles
Carpet beetles come in several types of subspecies, including the following:

Carpet beetle larvae prefer to feed in dark, protected places, consuming and damaging wool, fur, silk, cashmere, feathers, bone, and synthetic and cellulose-based fibers that contain some amount of animal fibers. Check for larvae and their cast skins under baseboards, and in and under upholstered furniture, air ducts, stuffed animals, stored cereals and grain, abandoned bird and wasp nests under eaves, and in attics, and clothes closets. Stored items are vulnerable to severe damage, so 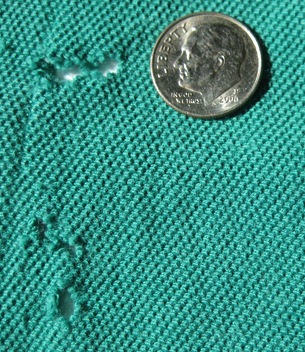 periodically inspect woolens and other susceptible items. Also, inspect for improperly sealed windows, as these are a likely entry point for carpet beetles, although the insects are small enough that it may be impossible to completely prevent their entry.

It is important for the homeowner to know the difference between carpet beetle damage and damage caused by other pests, such as clothes moths. Fortunately, the distinction is simple; moth infestations are often accompanied by adult moths flying nearby, and you will likely find adult moths, pupae casings or cocoons and larvae in your clothes. Carpet beetles are less conspicuous, as they typically move elsewhere after feeding, and the adults spend much of their time outdoors.  Telltale signs of beetle-damaged clothing include small, irregular holes, especially around the collar.

In summary, carpet beetles are a common source of damaged household items, and measures should be taken to prevent infestation.