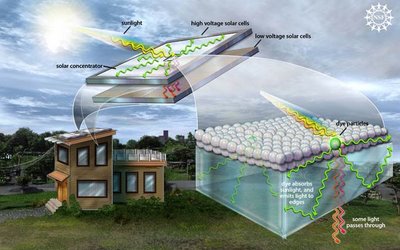 As reported in The Economist, Science, and other publications, researchers from the Massachusetts Institute of Technology (MIT) have developed a special kind of dye that can transform ordinary glass into a photovoltaic solar panel. Although this technology, known as organic solar concentrators (OSC), is still highly experimental, inspectors may soon find windows doubling as solar collectors.

OSCs utilize windows as collectors, directing light energy to solar cells in the window frames. To accomplish this, a special dye is affixed to the surface of a piece of the glass, which is then exposed to a light source. The dye absorbs incoming light and re-emits it inside the glass, where it bounces along until it reaches the edge. There, awaiting the absorbed light, is a thin layer of solar cells, which converts the light into electricity. The bouncing of the light is described by a principle known as “internal refraction,” which is the same phenomenon that keeps light trapped in optic fibers.

This design is essentially an evolved form of an idea that was abandoned in the 1970s, known as luminescent solar concentration. These early experiments failed because collected light was absorbed before it reached the edges of the glass (or plastic) plates. The MIT team solved this problem by adding a small concentration of dye that collects the absorbed light from its surrounding dye. They also introduced a new class of dye molecules, known as molecular phosphors, which are exceptionally transparent to their own light emission.

This innovation offers a contrasting approach to traditional solar concentrators, which use mirrors to concentrate sunlight onto solar panels. These devices are large and expensive, which limit their utility. Specifically, they rely on bulky sun-tracking mirrors that aren’t feasible in most residential settings. OSCs perform the same function as solar concentrators, but they lack the problems that make their predecessors cost-prohibitive and unwieldy.

The solar concentrating dye can also be applied to existing solar cells, enhancing their light-capturing ability by as much as 30%. MIT engineer Marc Baldo, quoted at TheHotSpring.com, said, "We think that, ultimately, this approach will allow us to nearly double the performance of existing solar cells for minimal added cost."

The team has founded a company called Covalent Solar, which plans to commercialize the technique and market it to homeowners and businesses within the next three years. Of course, the opinions of the researchers may be biased, as they also plan to profit from the sale of the technology. But if these dye-based solar concentrators can truly replace conventional solar collectors, and they become widely distributed, they could revolutionize the role of solar power in the global energy economy.

For now, the team must deal with technical complications, some of which are described below:

In summary, OSC technology may revolutionize the way homes and businesses receive their energy.