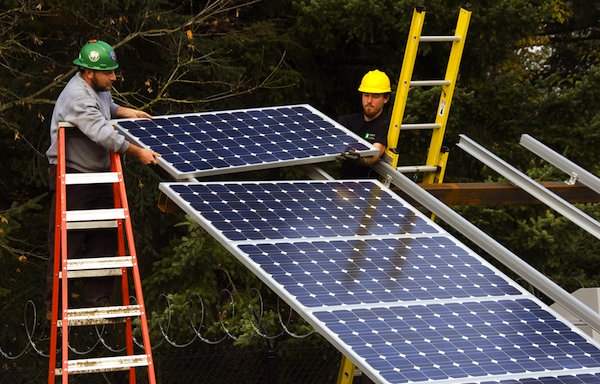 Colorado renters, low-income residents and homeowners who live in the shade will find it much easier to participate in the generation of solar power, pending the passage of new legislation HB 1342. At the end of March 2010, a compromise was forged between Colorado House Rep. Claire Levy and the Colorado Solar Energy Industries Association (CoSEIA) that would legalize the use of community-owned solar arrays, known as solar gardens, in communities statewide.

Currently, homeowners must install solar arrays on their own properties in order to qualify for subsidies and net metering. The new House bill allows people to buy into nearby solar arrays and receive credits from the state’s largest utility, Xcel Energy. Each customer would then own a share in the solar garden, but would still be consuming standard grid power; the energy produced by the solar gardens would be used to offset the electrical consumption of its owners. And, as with investment in any form of solar energy, solar garden owners could be faced with a slightly higher energy bill.

The bill will empower residents who, for various reasons, are unable to support a rooftop solar array. By expanding the solar market, the bill will also help remove a major obstacle to goals set by federal and state lawmakers concerning energy consumption. Specifically, the legalization of solar gardens will help Colorado reach the goal, signed into law by Gov. Bill Ritter, requiring that 30% of the state's electricity be generated by renewable energy sources by 2020.

The bill has opponents, however.  Some activists fear “energy sprawl,” or the loss of open space to large, ground-mounted solar arrays. Renewable energy expert Tom Konrad told the Boulder Weekly, “Any law which makes solar more likely to be ground-mounted than rooftop is a step in the wrong direction.” Local solar installers, too, feel threatened that the new legislation will permit large and more economical installations to eat into their market share. At issue specifically is language in the bill that may force them to compete with solar gardens for public funds. Levy rejected some of the concerns of local installers, saying that they “seemed more concerned about protecting their market share than expanding the use of solar energy in the state.”

Colorado is not alone in its efforts to promote solar gardens, which have become known as “solar shares” in California, and have cropped up in communities across Utah and Massachusetts. U.S. Sen. Mark Udall (D-Colo.) recently introduced the Solar United Neighborhoods (SUN) Act of 2010, which would extend the perks of the recent Colorado bill to the entire nation.

Liberalization of solar policies may soon be reflected in the emergence of this new kind of solar exploitation. Inspectors should be aware of these changes so they can inform their clients, especially those who the law seeks to support.