by Nick Gromicko and Kenton Shepard


What is an expansion tank?
An expansion tank is a metal tank connected to a building’s water heating appliance designed to accommodate fluctuations in the volume of a building’s hot water supply system. These fluctuations occur because water expands in volume as it gets hot and loses volume as it cools.
Expanding water volume in a closed system can create dangerously high water pressure. As water is forced into the tank by expansion, it compresses air contained inside of a rubber bladder. Air is used as a cushion because it exerts less force on its container than water, which cannot be compressed.
The function of this bladder is to prevent air from becoming absorbed into the water, a process that could cause the expansion tank to lose its ability to act as a sort of shock absorber. If, over time, the bladder begins to leak some air, a Schrader valve, identical to the fill valve found on bicycle and car tires, can be used to add more air.
What does it look like, inside and out? 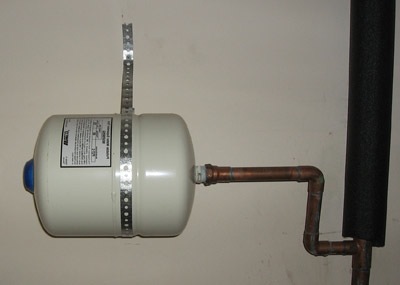 Expansion tanks are considerably smaller than water heaters, usually holding about two gallons in residential systems, although tank sizes vary in relation to the water volume of the hot water supply system they serve. The design pressure for which a tank is rated is marked on a label on the tank, commonly 150 pounds per square inch (PSI) for a residential tank.
InterNACHI inspectors should check that tanks are positioned high enough above the water heater that water will easily drain back down into the water heater tank.  It is best positioned near the water heater and may be installed vertically, either above or below the horizontal supply pipe, but can also be positioned horizontally. Horizontally-hung tanks will need additional support to reduce the stress on the copper piping.
The expansion tank should be inspected for proper location and support, corrosion and leakage. Although many jurisdictions now require an expansion tank to be installed at the same time that a water heater is installed, an expansion tank has not always been required in the past and may still not be required in some regions.
Not a Substitute for a Temperature Pressure Relief (TPR) Valve
If water heater controls fail and pressure in the system exceeds 150 PSI, or temperature exceeds 210° F, a temperature and pressure relief valve (TPR valve) installed on the side of the water heater tank will open, safely discharging water from the system. TPR valves are capable of reducing water pressure at a rate greater than the capacity of the water heater to raise it, thus eliminating the possibility that water will become superheated (greater than 212 degrees) and pose a serious threat. The importance of this valve cannot be overstated, and it is crucial that it is examined periodically for rust or corrosion, and the release lever should be exercised monthly by the homeowner, not by the inspector.
If a TPR valve fails to operate when it’s needed, the result can be catastrophic. Pressure will continue to build in the water heater tank as water temperature rises past the boiling point and water becomes superheated. Eventually, pressure in the tank will exceed the ability of the weakest part of the water heater to contain it and the tank will rupture, exposing the superheated water to air and causing an instantaneous and explosive expansion of steam. This situation can propel the water heater like a rocket or make it explode like a bomb, causing extensive property damage, personal injury or death.
In summary, the expansion tank should be inspected for proper location and support, corrosion and leakage. Although not required in every jurisdiction, they are quite crucial to the successful and safe operation of residential potable water systems.