IR Cameras: An Overview for Inspectors

by Nick Gromicko, CMI® and Ethan Ward
An infrared (IR) camera is a versatile, lightweight and cutting-edge device that can enhance an inspector's understanding of a building's different systems and components.  Its ability to read heat as color and then display that information in a way that's easily understood by homeowners and other clients makes the IR camera an increasingly important tool for inspectors to have in their equipment arsenal. 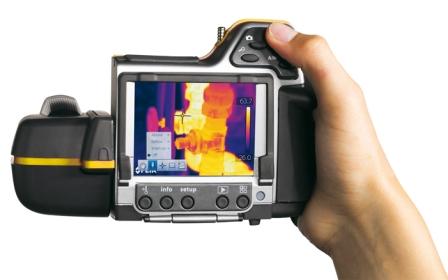 Infrared cameras translate the heat signatures of objects into colors on a gradient scale, with higher temperatures appearing as lighter colors, and lower temperatures and wet areas appearing as darker colors.  Also known as thermal imaging and thermography, IR technology captures the light that exists just outside the visible spectrum.  Thermal images show surface-heat variations, which is why an IR camera is such a diverse tool for commercial and home inspectors that can be used for a variety of applications.  Abnormally hot electrical components and connections can be viewed during an electrical inspection.  Areas of moisture that may lead to leaks and structural damage can be located based on apparent temperature differences.  Heat loss and air leakage in a building envelope, and even areas of insufficient insulation, can be pinpointed quickly and accurately during an energy audit.

Infrared radiation was first discovered over 200 years ago, in 1800, by William Herschel.  Herschel was a British astronomer most famous for discovering Uranus.  While testing filters for his telescope that would allow him to look directly at the sun, he realized that different-colored filters allowed different amounts of heat to pass through them.  He proceeded to conduct an experiment in which he measured the temperatures of the different colors of sunlight when it was split by a prism.  While measuring the respective temperatures, he discovered that the colors got progressively hotter.  When he moved the thermometer past the red band, outside the visible light split by the prism, he discovered that the area was even hotter.  Herschel had found the invisible spectrum of light now known as infrared, which would later become the basis of thermal imaging.

Thermal imaging was first used by the military after World War II as a reconnaissance tool, with cameras mounted on planes that collected images of restricted areas for analysis.  By the time of the Vietnam War, IR technology had expanded into commercial and industrial applications.   The Swedish company Agema is credited with building the first infrared scanning camera, which was used to inspect power lines.  As thermography has advanced and become more portable and less expensive, its practical applications have steadily increased.  The use of thermal imaging for building inspection has become very popular because it can locate and document defects in ways that provide more data and greater accuracy than many of the more traditional tools and techniques.

Infrared cameras can be used during building inspections and energy audits to locate problems that can be found by viewing differences in temperature, which the camera sees as infrared radiation and presents as gradient colors.  Every object warmer than absolute zero emits infrared radiation, which is invisible to the naked eye but is read by thermal imaging.  Being able to view this allows inspectors to locate problems that would otherwise be more difficult and time-consuming to find.  Understanding data that the camera displays is essential in utilizing IR technology correctly and to its fullest capabilities.

Thermal imaging during an inspection is basically used as a non-contact, temperature-measurement tool.  Being able to measure temperature differences in this manner allows quick evaluation of large areas.  It can also present some challenges to interpreting the data.  A major factor to consider is that the amount of energy radiated by any object depends on the emissivity of the materials of which it is constructed or composed.  This can lead to errors in interpreting the thermal images.

The emissivity of an object is dependent mainly on its surface qualities and the materials of its composition and construction.  Non-metals and opaque objects with rough surfaces generally have higher emissivity.  Pure, smooth, un-oxidized metals and objects with shiny, reflective surfaces have lower emissivity.  Objects with low emissivity can still be examined through thermal imaging but special care should be taken to ensure that such images are interpreted correctly.  For example, images of reflective surfaces may be affected by a hot light bulb elsewhere in the room.  This could be misread as a temperature difference in the area being viewed.  Taking into account the emissivity of objects being viewed, and scanning areas from different spots and angles can help ensure accurate interpretation of the thermal images.  There are also many charts and guides available that show the relative levels of emissivity for different materials, which may be helpful for accurately interpreting and reporting the data.

In the inspection industry, infrared cameras are mainly used to gauge what's referred to as “apparent" temperature.  Because of the differing levels of emissivity of different areas and objects, as well as other factors that can influence data, such as wind and weather conditions, the exact temperature of an anomaly can be trickier to determine with infrared alone, and this is why the most common purpose of employing thermal imaging in inspections is to locate and document the problems. 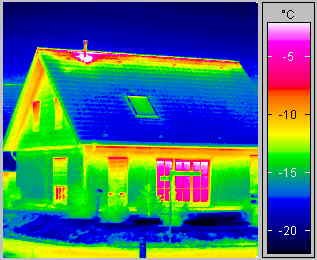 For example, a dark area in the thermal image of a ceiling may indicate that there is moisture above it.  Once this has been observed, a moisture meter can be used to confirm moisture intrusion.  The pattern of the wet spot can be documented with the camera, and the area above the ceiling can then be examined through infrared in an attempt to determine the source of the leak.
In a case like this, which is a typical example of how infrared is often used in an inspection, the exact measurement of the temperatures -- the quantitative measurement -- is not relevant.  The important thing is that the apparent temperature difference led the inspector to a problem area that could be documented and examined more closely.  This makes inspection with an IR camera a qualitative measurement, rather than a quantitative one.  Thermal imaging is used to locate anomalies through differences in apparent temperatures, analyze the patterns, and document the issues.

Thermal images are generally used in inspection reports to visually document problems found on site.  The image captured with the IR camera can be presented alongside a digital, visible-light photo, along with a description of the issue that was discovered.  Some infrared cameras incorporate the ability to switch between standard, digital and IR-imaging modes for just this purpose.  The inclusion of standard, digital images makes side-by-side comparisons easier for both inspectors and clients to understand because it shows any obvious, visible defects.  But IR doesn't stop at the obvious.  The IR image shows accurate evidence of a defect that can't be fully captured with the digital camera.  For example, a digital image may show a dried water stain at a wall-ceiling junction, while its IR counterpart displays a dark spot in the same area.  The clear advantage of thermography is that while the digital image displays what looks like an old stain, the IR image confirms that moisture is still present, requiring further investigation to locate and remediate the problem.

Manufacturers’ individual products generally come with their own "starter-kit" reporting and analysis software, with more complex software usually sold separately.  Since the software is typically proprietary, it is common to treat the thermal images as any other image is treated, and simply load them into whatever programs or software the inspector normally uses.  At this time, there is no standard or preferred software for the inspection industry for reporting or analyzing images.

As thermography has advanced, thermal imaging has become popular in the field of inspection because IR cameras are fast becoming an indispensable tool in helping inspectors locate and documents defects quickly and accurately.
Consumers should always seek inspectors who are Infrared Certified by looking for the Infrared Certified logo below.