Low-emissivity glass, also known as low-E glass, uses a microscopically thin and virtually invisible metal or metallic oxide layer incorporated in the glazing surface to control heat transfer through insulated windows, reducing energy loss by 30% to 50%.  Since the heating and cooling energy lost through windows accounts for 4% of all U.S. energy consumption every year, the Department of Energy is beginning to push more efficient windows as a standard, with low-E windows at the forefront.  Meanwhile, as more low-E windows are put into service, unexpected problems have arisen.  Inspectors who conduct energy audits, as well as energy-conscious consumers, can benefit from knowing more about these energy-efficient windows and the advantages and problems associated with them.

Benefits of the Design

The super-thin coating utilized in low-E glass helps to reduce the transfer of heat through the window in order to keep heat from entering the home in hot climates, and to prevent heat from escaping from the home to the exterior in colder climates.  The low-E coating is typically used on multi-pane windows with argon gas-fills.  Argon is an inert gas which has higher resistance to heat flow than air, and is non-toxic, colorless and odorless.  In hotter climates with east- or west-facing windows, the low-E coating is applied to the outer layer of the glazing to help keep the heat out.  In colder, heating-dominated climates, it is applied to the inner layer to keep warmth in.

Installing low-E windows can provide significant energy efficiency and savings, especially in hotter climates where windows with a low solar heat-gain coefficient (SHGC) are most effective.  The SHGC rating for a window is the quantification of its properties in relation to its ability to transmit heat from solar radiation.  A high SHGC means more solar heat is allowed to pass through the window, and a low SHGC means less solar heat will pass through.  While a window with a higher SHGC can actually be beneficial in some climates where cooling needs are minimal, because it allows for more solar heat gain to warm the interior during winter months, windows with a low SHGC rating is best for hot climates where blocking the sun’s heat is much more important.

Spectrally selective low-E coatings are designed to filter out the infrared (heat) portion of the light spectrum.  They can filter 40% to 70% of the heat that is normally transmitted through standard window glass while allowing the full amount of available light to pass through.  These coatings can be applied to many types of tinted glass based on the aesthetic and climate needs.  Computer simulations have shown that advanced window glazing with spectrally selective low-E coatings may reduce electric space-cooling requirements of new homes in hot climates by more than 40%.

Low-E coatings on glass can be either pyrolytic or sputtered.  A pyrolytic coating uses tin oxide and some additives deposited directly onto the glass surface during the manufacturing process while it’s still hot, which results in a baked-on surface layer that’s hard and durable.  This is referred to as hard-coat low-E glass, and it is usually used on insulated glass units where the low-E coating is inside the sealed air space.  It can also be applied to a single pane or separate storm window.

Sputtered coatings usually consist of three primary layers with at least one layer of metal deposited on glass or plastic film.  These coatings must be protected from humidity and contact, which is why they are often referred to as soft-coat low-E coatings.  Like pyrolytic coatings, these are typically found within the sealed air space of a multi-pane window.  They can also be used in suspended films and to retrofit windows.

Since the energy efficiency of a window type depends greatly on the climate it will be installed in, different kinds of low-E windows have been designed to be effective for specific climates.  These include low-E windows engineered for high, medium and low solar gains.  In mixed climates where heating and cooling are used with nearly equal frequency, all three types may result in similar efficiency, depending on the house design.  Higher solar-gain low-E windows perform best in winter, and lower solar-gain low-E windows perform best in summer.
The following is a comparison of the characteristics of the different types.

It has been determined that low-E windows are the culprit of melted vinyl siding installed on nearby houses and buildings, with initial reports of such damage surfacing in 2007.  This is because the intense heat reflected by the windows can be focused, similar to the burning effect that can be achieved by focusing the sun’s rays through a magnifying glass. 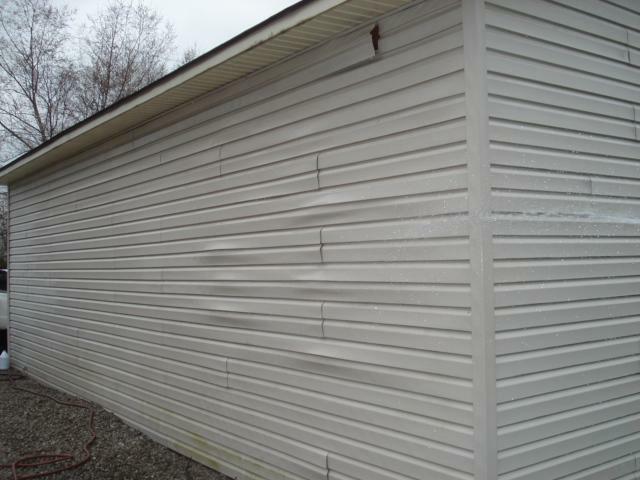 The problem generally occurs when the sun strikes a low-E window and the reflection lands on the side of a nearby house, causing its vinyl siding to become hot enough that it melts and distorts.  It has been reported that the hot glare can affect siding up to 20 feet away.  The melted siding usually exhibits a diagonal pattern across the distorted area.

The intense reflection from low-E windows is reported to have caused other kinds of damage, as well, such as melted plastic trash bags and plastic garbage cans, melted plastic solar collectors, melted plastic parts of vehicles, and melted housewrap on new builds yet to be covered with siding.
Four house fires were confirmed to have been caused by such reflections, according to an investigation by the Consumer Product Safety Commission.  In these cases, reflections from sunroom roof glass and skylights ignited nearby cedar shingles.
The hazard is not limited to property.  One new high-rise hotel in Las Vegas reportedly gave off reflections hot enough to burn people using the hotel pool.

Windows with standard glass panes can cause similar damage in some situations, but this is rarely reported.

Who Is to Blame?

There has been some controversy and debate about this, focused mainly on whether the manufacturers of the windows or the manufacturers of the damaged siding should be held accountable.  Representatives from both industries have been tight-lipped about the issue, and neither party admits liability.  Some representatives have tried to downplay the issue, stating that damage to siding caused by low-E windows is an extremely rare occurrence.  At the same time, every major vinyl siding manufacturer has updated their warranties to specifically exclude heat damage caused by window reflections, implying that the problem may not be nearly as rare as industry representatives contend.

At least two organizations, the Vinyl Siding Institute and the American Architectural Manufacturers Association (a window-makers' association) have begun research on the problem but have not released any findings.  It is likely that as awareness of the problem spreads, more data will be gathered and eventually made public.

As the debate continues over who should be held accountable for damaged siding, forward-thinking manufacturers are looking ahead for ways to deal with the issue.  One solution that vinyl siding manufacturers have begun to implement is an additive that can increase the vinyl’s resistance to heat.  The additive, called TempRite™, is manufactured by Lubrizol, a chemical company specializing in polymers and resins, and known primarily for their CPVC plumbing pipe.  Siding manufactured with this additive can withstand temperatures in the range of 225° F, while traditional vinyl siding will begin to warp and distort at around 170° F.

Other more simple solutions have also been suggested, such as planting bushes or trees to shade siding from the windows' glare, or using awnings and shades at the window to help minimize the windows' strong reflections.  While these may not be effective solutions long-term, and don't address whether the manufacturing process of low-E windows should be altered to prevent their hot reflectivity, they can be helpful in the meantime while the problem and potential solutions are being researched.

As low-E glass becomes more common, inspectors are likely to encounter it more frequently.  Knowing something about how it works and the controversy surrounding it will help inspectors answer clients’ questions about low-E glass during home inspections and energy audits.