Commercial and Home Inspector Safety: Carcinogens on the Job

Commercial and residential inspectors know that facing potential dangers in the course of their inspections is an inherent risk of the job.  In addition to wearing the appropriate personal protective equipment (PPE) and arming themselves with the proper tools and safety devices, inspectors must also maintain awareness of their exposure to various materials within the systems and components of the buildings they inspect that can lead to adverse physical reactions. The effects can range from mildly irritating to the rare type of menace that can be lethal.
InterNACHI, with the help of its members, has produced a number of articles and courses that provide guidelines for inspector safety. It's important to update such information as more threats are uncovered, including those confirmed in occasional announcements by U.S. governmental agencies.

HHS Adds More Substances to its Report on Carcinogens

On June 10, 2011, the U.S. Department of Health and Human Services added eight more substances to its latest Report on Carcinogens (RoC). Originally mandated by Congress, the Report, which is prepared for the HHS secretary by the National Toxicology Program (NTP), now includes 240 chemicals, biological agents and other substances that the NTP has deemed fall into one of two categories:  known human carcinogens; and substances reasonably anticipated to be carcinogenic.  Factors such as individual susceptibility and the amount and duration of exposure ultimately determine whether a substance listed in the RoC will cause cancer in humans.

According to the National Institute of Environmental Health Sciences, under the auspices of the National Institutes of Health, public and private-sector support can lead to the nomination of an agent suspected to cause cancer, and it then undergoes rigorous scientific testing, as well as a public comment period, before landing on the list.  Other federal agencies, including the Environmental Protection Agency, the Centers for Disease Control and Prevention, the Food and Drug Administration, and the Occupational Health and Safety Administration, among others, contri

bute their own data and expertise to the evaluation process.

The latest additions to the 12th Report on Carcinogens include:

Of this list, formaldehyde and aristolochic acids have been confirmed as known carcinogens, while the remaining six are anticipated to be a cancer risk.

It’s not news that formaldehyde and certain inhalable fibers (such as those found in insulation) are major irritants with prolonged or repeated exposure, and these substances pose well-known risks to home inspectors and those in the construction industry.  Formaldehyde, in particular, was listed as an anticipated carcinogen as early as the second RoC, and only managed to inch its way onto the known carcinogens list after years of repeated testing.

But heavy lobbying by the chemical industry had apparently held up these findings and delayed release of the latest RoC for several years. Normally, the release of an RoC results in education campaigns, as well as federal legislation aimed at protecting the public, and may draw or redefine limits for workplace exposure.  Legislation may also be enacted to either limit or ban substances in the manufacture and import of carcinogenic items.

The first U.S. standards limiting formaldehyde in composite wood products sold and manufactured in the U.S. were signed into law by President Obama in 2010.  The toughest standards worldwide, they target the formaldehyde-containing resins and glue used in the manufacture of particleboard and medium-density fiberboard, which are typically used to construct low-cost cabinetry and furniture, and hardwood plywood, which is a common material used in flooring.  These standards went into effect January 2013, capping f

ormaldehyde emissions in composite wood products at 0.09 parts per million.

Despite the strength and durability of materials such as particleboard, most types contain formaldehyde and other volatile organic compounds (VOCs) whose emissions are not worth the risk to one’s health.  Minor symptoms from prolonged exposure include irritation of the eyes, nose, throat and respiratory tract, skin rashes, fatigue and headaches.  In sensitive persons, it can trigger an asthma attack.  It’s now been confirmed that it can also cause nasopharyngeal cancer, which affects the upper throat.

In addition to the formaldehyde found in wood composite products, it’s also found in synthetic fibers, textile coatings and plastics.  Dr. Otis Brawley, chief medical officer for the American Cancer Society, is especially concerned about the widespread use of formaldehyde in the structures and components of homes, as well as the furniture and household goods found within.  As reported by The New York Times, Dr. Otis said, "It's the smell in new houses… It's everywhere."  The tactical delay in releasing the latest RoC means that humans have been unnecessarily exposed, and the toll in cancer statistics, both casual and occupational, is yet to be fully felt.

Other Added Carcinogens and Their Effects

According to the 12th RoC, of the other seven carcinogens, some pose direct hazards and others pose lower or indirect danger to home inspectors and homeowners.  Here are their characteristics and risks: 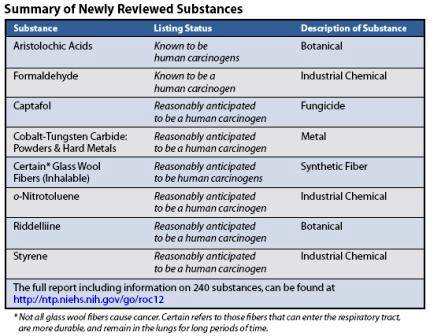 Mold, Moisture and Your Home