Window Gas Fills: What Inspectors and Consumers Should Know

Improvements in window design are an important step toward reducing overall energy costs, as heat gain and loss through windows account for up to half of a home’s heating and cooling needs, according to the U.S. Department of Energy.  Gas fills, as well as other efficient or green window features, such as low-E coatings and Heat Mirror® insulating glass, help plug “thermal holes” in the building envelope. When used in conjunction with low-E coatings, gas-filled window units can yield incredibly high R-values, so they make a good choice for retrofitting a home to enhance its overall energy efficiency.  Consumers can educate themselves on the benefits of multi-paned gas-filled windows, and home inspectors who perform energy audits and/or thermal imaging inspections can help their clients determine whether a retrofit with this type of window is a cost-effective upgrade.
What are Gas Fills?
Gas fills are special gases pumped inside insulated glass units (double- and triple-paned window assemblies also known as IGUs) to improve their thermal efficiency. These viscous, slow-moving gases (typically, argon and krypton) allow for less convection than would ordinary air, minimizing convective currents within the window and reducing the transfer of heat across the window.

Homeowners and InterNACHI inspectors may be able to tell if a building’s windows are gas-filled by checking the specifications on the original work order or the window tag, which is typically found along the bottom inside track of the window. Two small holes may also be observed along the spacer -- one where the gas entered the unit and the other for air to exit.
Argon and krypton are the gas fills used most often by window manufacturers to displace the air between the panels in windows. Argon, which comprises slightly less than 1% of the Earth’s atmosphere, is non-toxic, inert, clear and odorless. Its thermal conductivity is roughly 67% that of air and it’s inexpensive, making it an attractive gas fill.
Krypton shares many qualities with its fellow noble gas argon, except that it’s an even better insulator, albeit more expensive to produce. When cost and functionality are considered, argon is a more efficient thermal barrier per dollar spent, especially in the larger ½-inch (11mm to 13mm) gaps between double-paned windows. Krypton is more commonly used in the tighter ¼-inch to 3/8-inch (6mm to 9mm) gaps within triple-paned windows. A mixture of krypton, argon and oxygen gases is sometimes used to reconcile performance and price, and occasionally xenon and nitrogen are used, as well.

Gas Leaks
Gas-filled windows will leak over time -- as much as 1% per year, according to some estimates -- depending on the quality of the window and its installation, the building’s climate, including its exposure to the sun and the altitude, and other factors. However, these windows will usually perform adequately even after many years of gradual depressurization. According to the National Glass Association, if 80% of the gas remains in spite of gradual leakage over time, a window can be expected to maintain its properties and effectiveness. That means that, "even if 1% was leaking out per year, the window would still be effective in 20 years.”
If the breach is significant, however, the window will no longer be an effective thermal barrier and may require replacement. Condensation or fog inside the window unit indicates that the gas fill has escaped and been replaced with moisture-laden air. Homeowners should clean the window's exterior to be sure that the observed moisture is, in fact, within the window rather than on its surface. The manufacturer or installer should be contacted if the window fails. Leaks can be detected only with special gas-detection equipment. But homeowners should rest assured that leaked argon or krypton poses no health hazards to a home's occupants.
One rare yet shocking consequence of argon leakage is the sudden implosion of the window. 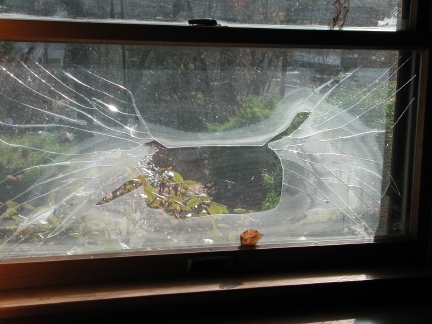 Due to molecular differences between argon and the principal components of air, nitrogen and oxygen, argon under pressure to escape a window unit may exit the seal faster than it can be replaced with air. Under this circumstance, the glass will bend inward to accommodate the gradual reduction in pressure within the window. If conditions are right, according to USGlass Magazine, “units have been reported to shatter with a bang, sometimes described as loud as a gunshot. While the broken glass usually stays within the unit, on at least one occasion, glass has shattered with enough force to send glass shards flying outward.” Elevation differences between the location where the IGU was first pressurized and its installation location may also account for the negative pressure. This phenomenon is quite rare, however, especially in newer windows with superior seals.
In summary, double- and triple-paned windows are often filled with the gases argon or krypton to reduce convection within the window units to improve the building’s overall energy efficiency.  IGUs can be huge energy-savers for homeowners, and InterNACHI inspectors can help their clients determine whether these windows are the right choice.